(Hamburg, April 5, 2022) The HWWI commodity price index rose by an average of 32% in March compared with the previous month. Russia’s invasion of Ukraine led to price surges in almost all commodity segments. All three sub-indices represented in the index, the index for energy raw materials, the index for industrial raw materials and the index for food and beverages, recorded huge price increases in March compared with the previous month. These sharp price increases highlighted the great importance of Russia in commodity markets, particularly in the markets for energy raw materials. The significant price surge on the grain markets also reflected Ukraine’s important role as a producer country.

Crude oil prices showed a high degree of volatility in March due to the increasing uncertainty triggered by the war in Ukraine, rising by an average of 37% compared with the previous month. Prices for the European benchmark Brent rose sharply in the first week, reaching a high of $129 per barrel on March 08. Prices then fell back to $98 per barrel by mid-month before rising again to $121 per barrel by March 23. After a sharp decline at the end of the month, Brent crude oil prices ended the month at $105 per barrel.

The enormous price increase triggered by the Russian invasion of Ukraine and the current high volatility on the crude oil markets reflect Russia’s important role on the crude oil markets. Russia is the second largest crude oil producer in the world after the United States. Fears that a further escalation of the conflict could affect Russian crude oil supplies and lead to supply shortages repeatedly drove up prices. At times, crude oil prices reacted with a decline to information about possible rapprochements between the warring parties, such as at the Russian-Ukrainian talks in Istanbul in the first half of the month.

By contrast, the sharp drop in prices at the end of the month was due to announcements by the US government. In order to pressure oil prices, the US government plans to release a large part of its strategic oil reserves. Thus, an average of one million barrels of crude oil per day from government reserves is to be offered on the market over the next six months. The U.S. government also announced new measures to increase U.S. oil production. In addition, the Organization of the Petroleum Exporting Countries including Russia (OPEC+) decided at its monthly meeting at the end of the month to increase oil production by 432,000 barrels per day in May.

Gas prices reacted particularly strongly to developments in Ukraine in March. While prices for American natural gas rose by an average of 11.61% in March compared with the previous month, prices for European natural gas increased by 72.9%. As the most important player in the European gas market, Russia supplies about 40% of the European Union’s gas needs, and about one-third of those supplies are via Ukraine. The war in Ukraine is raising fears that Russian gas supplies could be cut off. Putin’s announcement that gas deliveries may now only be paid for in rubles also had a price-increasing effect. The end of the European winter with milder temperatures could reduce demand for European gas and temporarily ease the situation on the gas market to a certain extent.

In addition to crude oil and natural gas prices, coal prices also rose significantly in the wake of the Russian invasion of Ukraine. While Australian coal prices increased by 46.15% compared with the previous month, South African coal prices increased by 63.02% in March. On the one hand, coal is increasingly in demand as a substitute for crude oil and gas as energy commodity prices rise. On the other hand, the war in Ukraine also has a direct impact on the global coal market, as Russia is the third largest coal exporter. Market participants fear that the already scarce global coal supply will be further reduced by the war in Ukraine and Western sanctions against Russia. 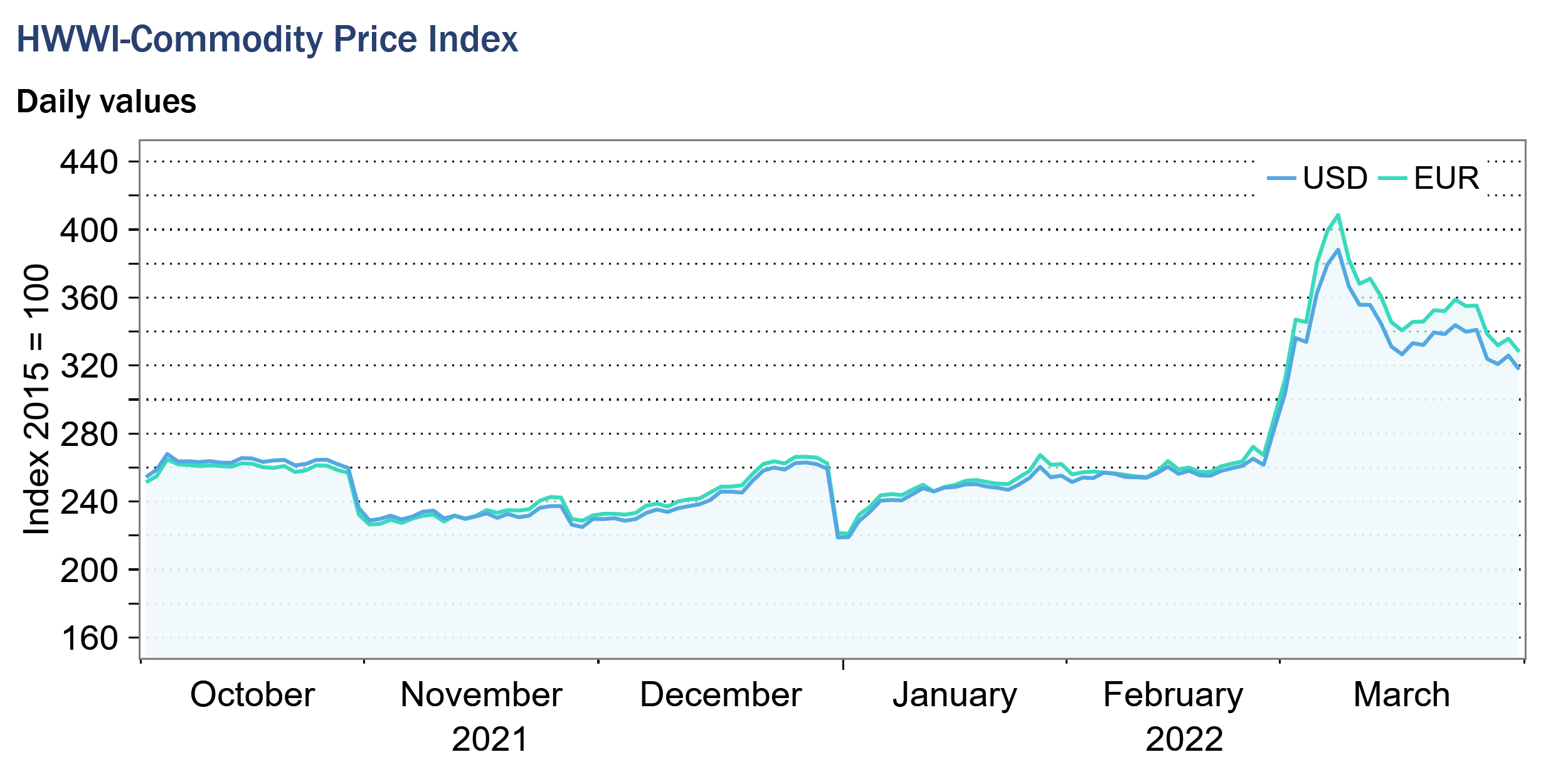 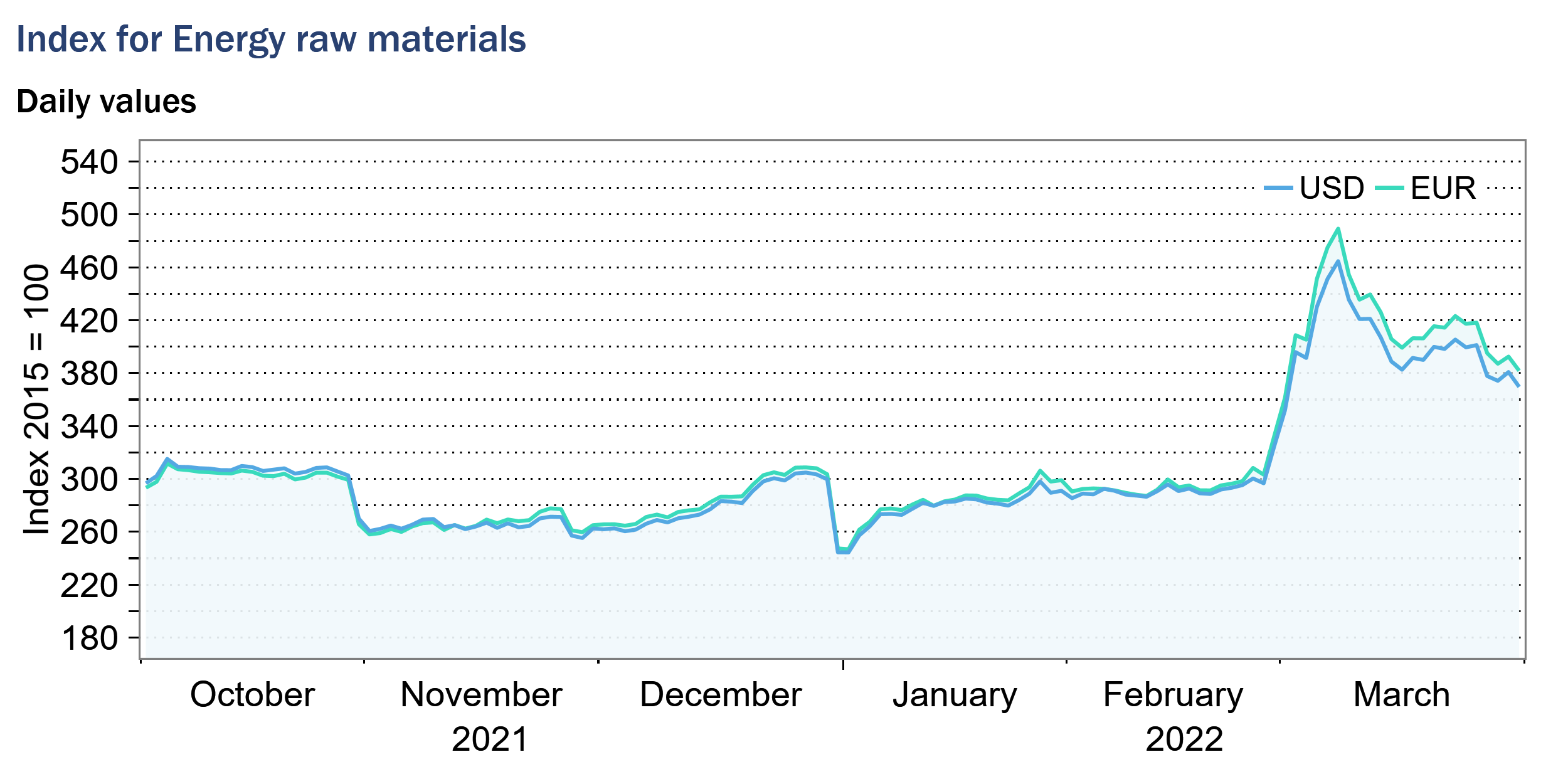 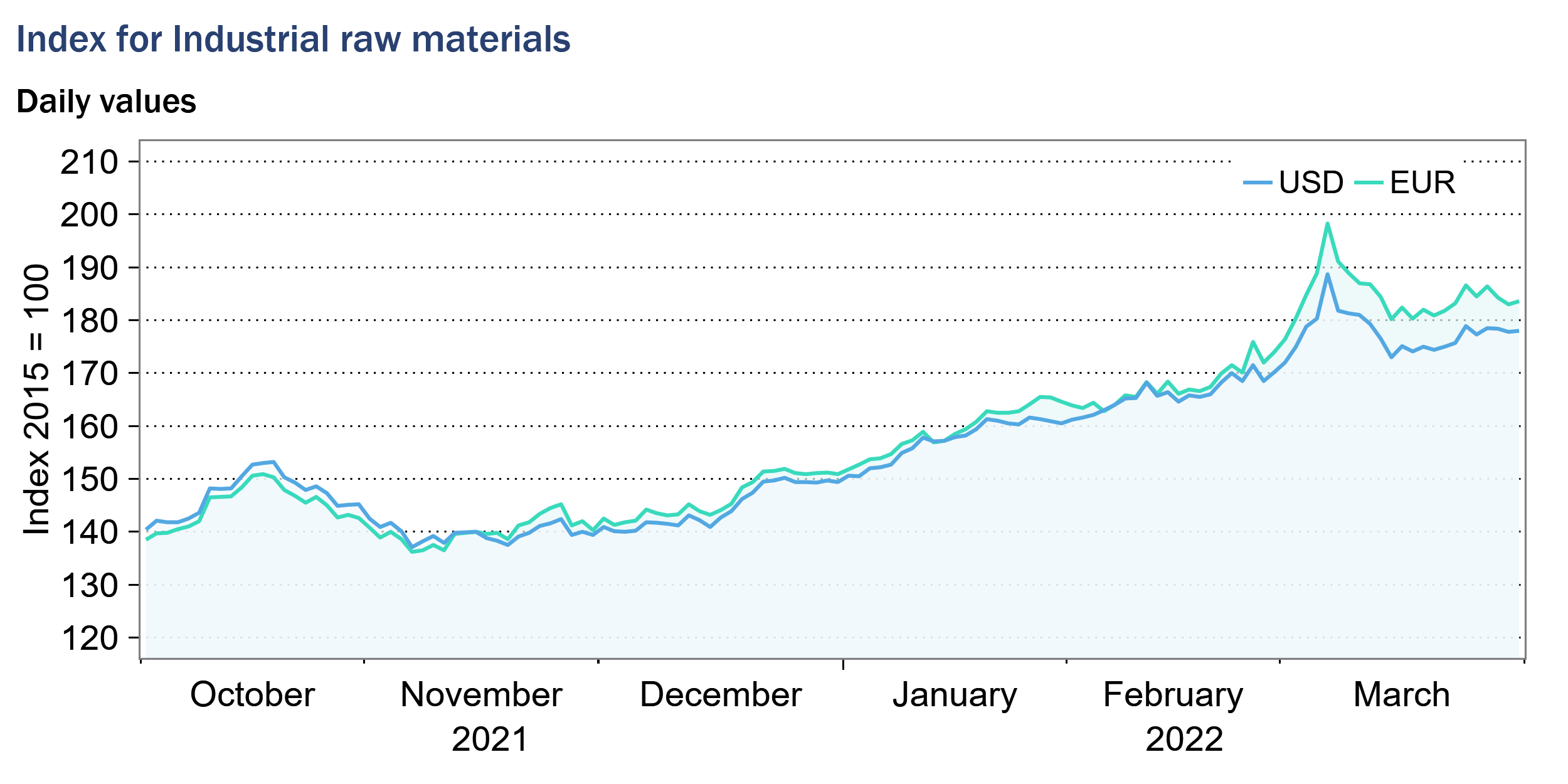 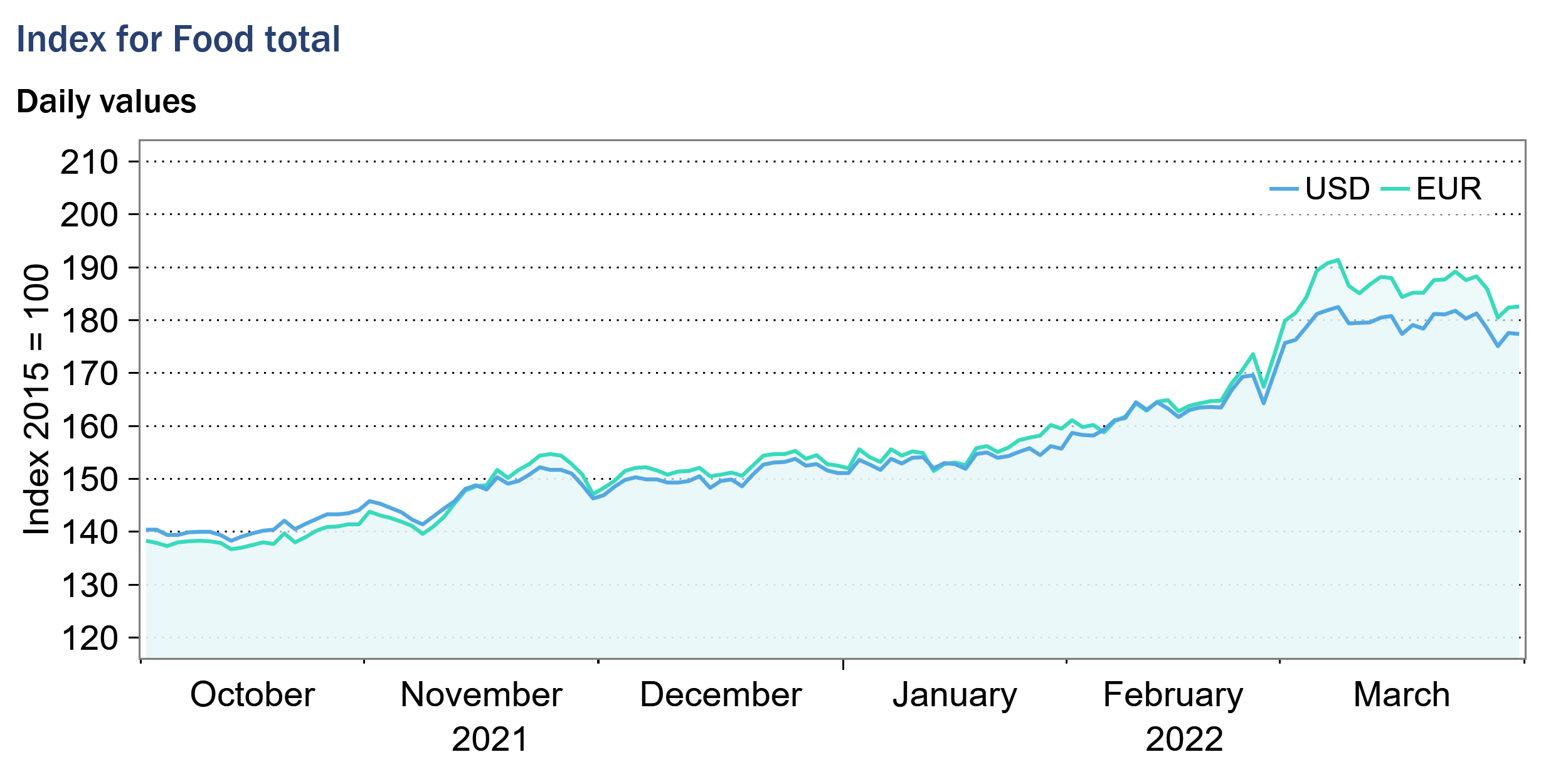 The industrial raw materials subindex, which is broken down into the index for agricultural raw materials, the index for nonferrous metals and the index for iron ore and steel scrap, rose by 7% in March compared with the previous month. All three sub-indices recorded monthly average increases, also responding to the war in Ukraine.

The Russian invasion of Ukraine triggered a price shock on the markets for industrial metals. In the first half of the month in particular, prices for nonferrous metals, especially aluminum, zinc and nickel, rose to record highs. The sharp rise in aluminum prices at the beginning of the month was due to fears of supply bottlenecks. Russia is responsible for around 6% of global aluminum production.

The renewed introduction of strict lockdown measures in China to implement the no-covid strategy eased the situation on the metal market and caused prices for aluminum to fall. The Chinese government’s strict handling of the Omicron virus variant threatens to slow economic growth in China and thus reduce demand from the world’s largest consumer of base metals. In addition, both aluminum and zinc production are highly energy intensive. The current high cost of energy is driving fears that production of these metals could be temporarily suspended, which in turn would lead to a supply shortage. Overall, aluminum prices increased by an average of 8.5% and zinc prices by 9.06% in March compared with the previous month.

Developments on the nickel market were particularly noteworthy in March. The nickel price rose by an average of 56.31% in March compared with the previous month. As Russia is the most important producing country for nickel after Indonesia and the Philippines, the Russian attack on Ukraine led to fears of possible supply shortages for the metal and caused prices to rise. Even before the Ukraine war, already high nickel prices led to increased short selling on the London Metal Exchange (LME) as speculators bet on falling prices. When prices then continued to rise contrary to the expectations of the short sellers, they were forced to buy nickel themselves to close out their positions, which drove the price up further (short squeeze). Following a historic rise in nickel prices to $100,000 per ton, trading on the LME was temporarily suspended. After nickel trading resumed, the nickel market eased and the nickel price ended the month at $33,400 per ton.

Iron ore prices also increased in March by 5.03% from the previous month but remained on average 10.04% lower than in the corresponding month a year earlier. The trend in iron ore prices in March was influenced by various global developments. On the one hand Ukraine and Russia are major iron exporters, so here too the Ukraine war triggered concerns about possible supply bottlenecks, which had a price-driving effect. Secondly, expectations of a further slowdown in Chinese economic growth due to the no-covid strategy and an associated decline in steel demand weighed on prices. The latter was mitigated by the fact that the Chinese government is trying to support economic growth through generous infrastructure investment, which in turn will boost steel demand. Despite the strict lockdown measures to combat the Covid virus in China, steel production facilities also remained open in the areas affected by Corona.

The index for food and beverages rose by 9.8% in March compared with the previous month and was thus 37.3% higher than a year earlier. While prices for grains and for oils and oilseeds rose on average in March, prices for luxury foods fell.

The Russian war against Ukraine had a significant impact on the grain markets and led to sharp price increases in March, particularly for wheat. The price increase on the wheat market reflected fears of shortages in Russian wheat due to the sanctions and in Ukrainian wheat due to crop failures caused by the war. Russia and Ukraine are two of the top wheat exporting countries, together accounting for one-third of global wheat exports. Wheat prices, which were already at a high level previously, rose by a further 31.76% on a monthly average compared with the previous month.
As Ukraine is also a major corn producer and one of the world’s largest corn exporters, corn prices also rose in March due to the war in Ukraine. On the demand side, corn prices were additionally strengthened as the current high prices for crude oil make the use of biofuel more attractive, which further strengthens the demand for corn.

On the markets for luxury food, however, the picture was different in March. Prices for coffee, cocoa and tea fell on average for the month compared with the previous month. After months of rising coffee prices, prices for coffee fell by an average of 7.68% in March compared with the previous month. In contrast, sugar prices rose as high crude oil prices increased demand for bioethanol from sugar cane, reducing world supply of sugar.