(Hamburg, November 10, 2021) The HWWI Commodity Price Index continued to rise strongly in October, exceeding the previous month’s value by 18.7 %. Compared to the previous year’s value, the overall index recorded an increase of 120 %. All three sub-indices for energy raw materials, industrial raw materials and food and beverages increased in October. The HWWI commodity price index was driven most strongly by the continued strong growth in prices for coal, natural gas and crude oil. The price driver continues to be the rising demand for energy raw materials in the course of the recovery of the global economy, which is encountering a continuing shortage of supply.

Crude oil prices continued to rise strongly in October, by an average of 12.5 % compared to the previous month. Prices of the European benchmark Brent crude grew steadily until 26 October, reaching highs of US$ 86 per barrel, before easing slightly towards the end of the month. The US benchmark WTI reached a high of 85 US dollars per barrel at the end of the month, a level not seen since 2014. On average, crude oil prices recorded an increase of over 100 % compared to October of the previous year. The price driver continues to be the increased global demand in the wake of the recovery from the Corona recession. Rising demand continues to be met by tight global crude oil supply. OPEC+ continues to rely on only a slow and gradual increase in production by 400,000 barrels per day. Even appeals from the US government have not been able to persuade OPEC+ to increase production more strongly again to counteract the rise in oil prices.

Coal prices also rose sharply again in October. Both Australian and South African coal prices rose by a further 27% compared to the previous month. At the beginning of October, floods in important producing regions of China led to the closure of major coal mines and resulted in a reduction of Chinese coal stocks and thus increased import demand.

Natural gas prices, which had already been at a very high level for several months, increased strongly again in October. Especially European natural gas prices rose sharply and were on average more than 60 % higher in October than in the previous month. Gas prices continue to reflect low inventories and rising demand for natural gas as the pandemic crisis catches up. At the end of the month, prices for European natural gas fell. This was due to Putin’s announcement that European gas stocks would be replenished by Russia in November. 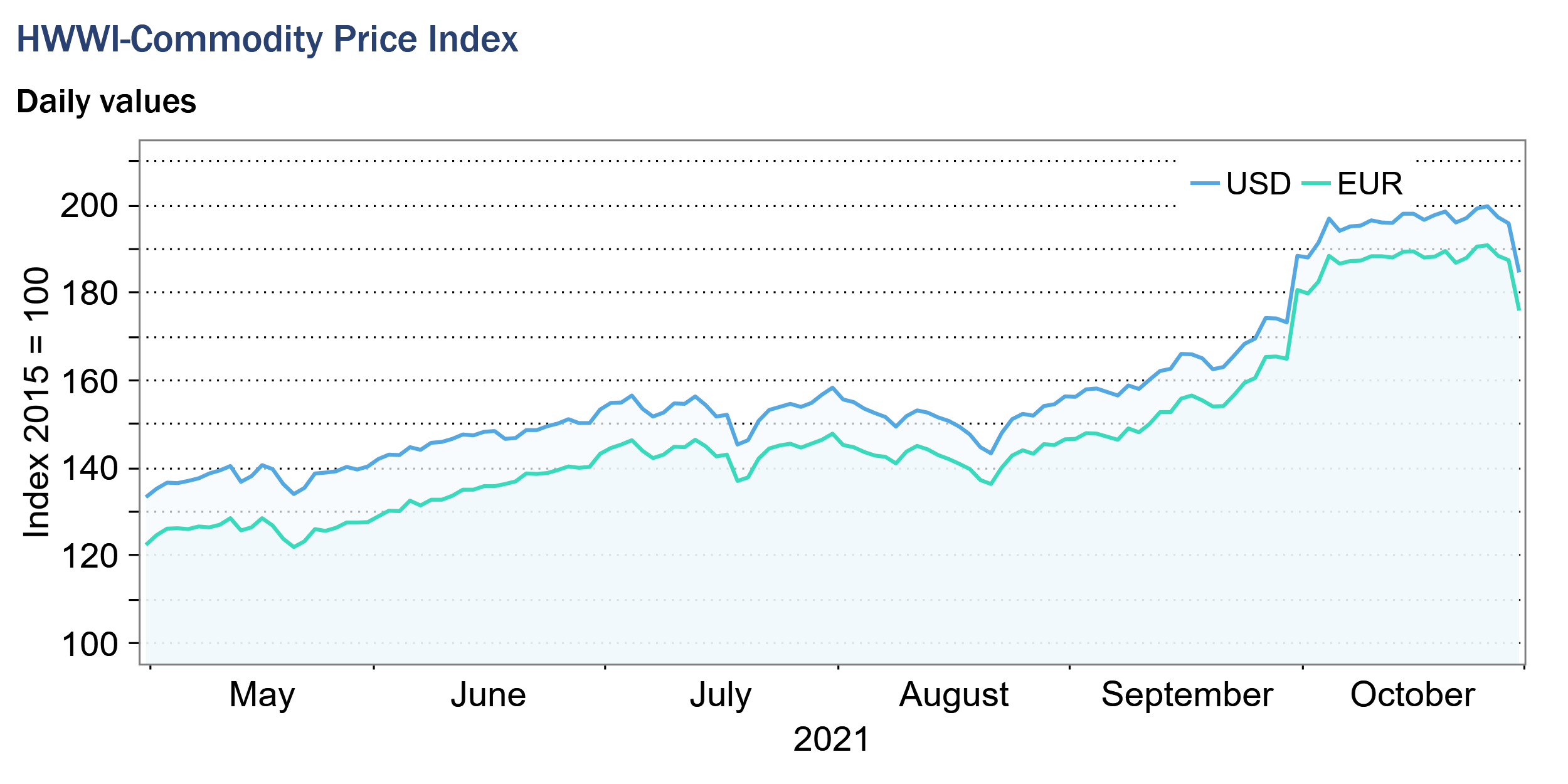 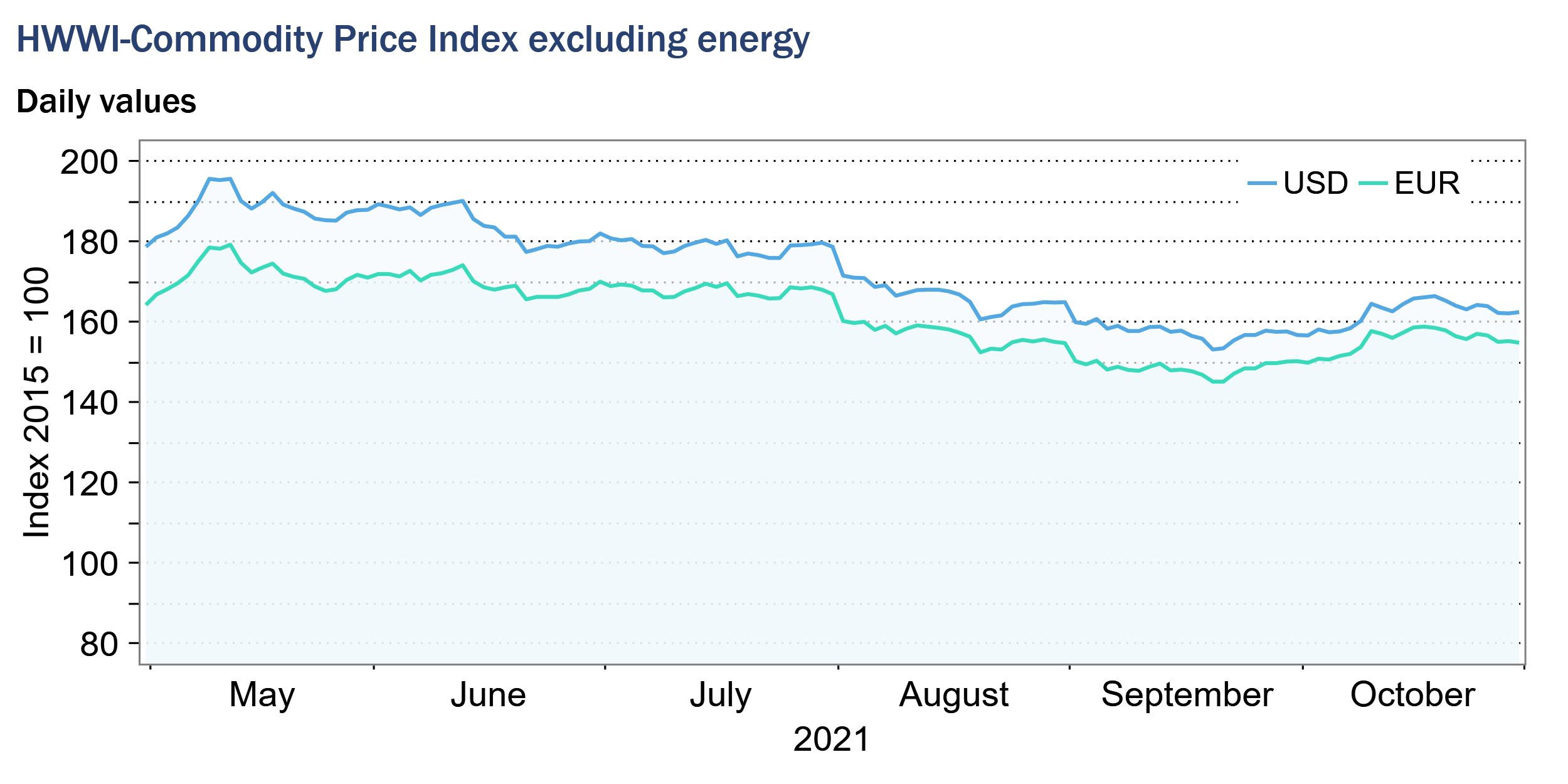 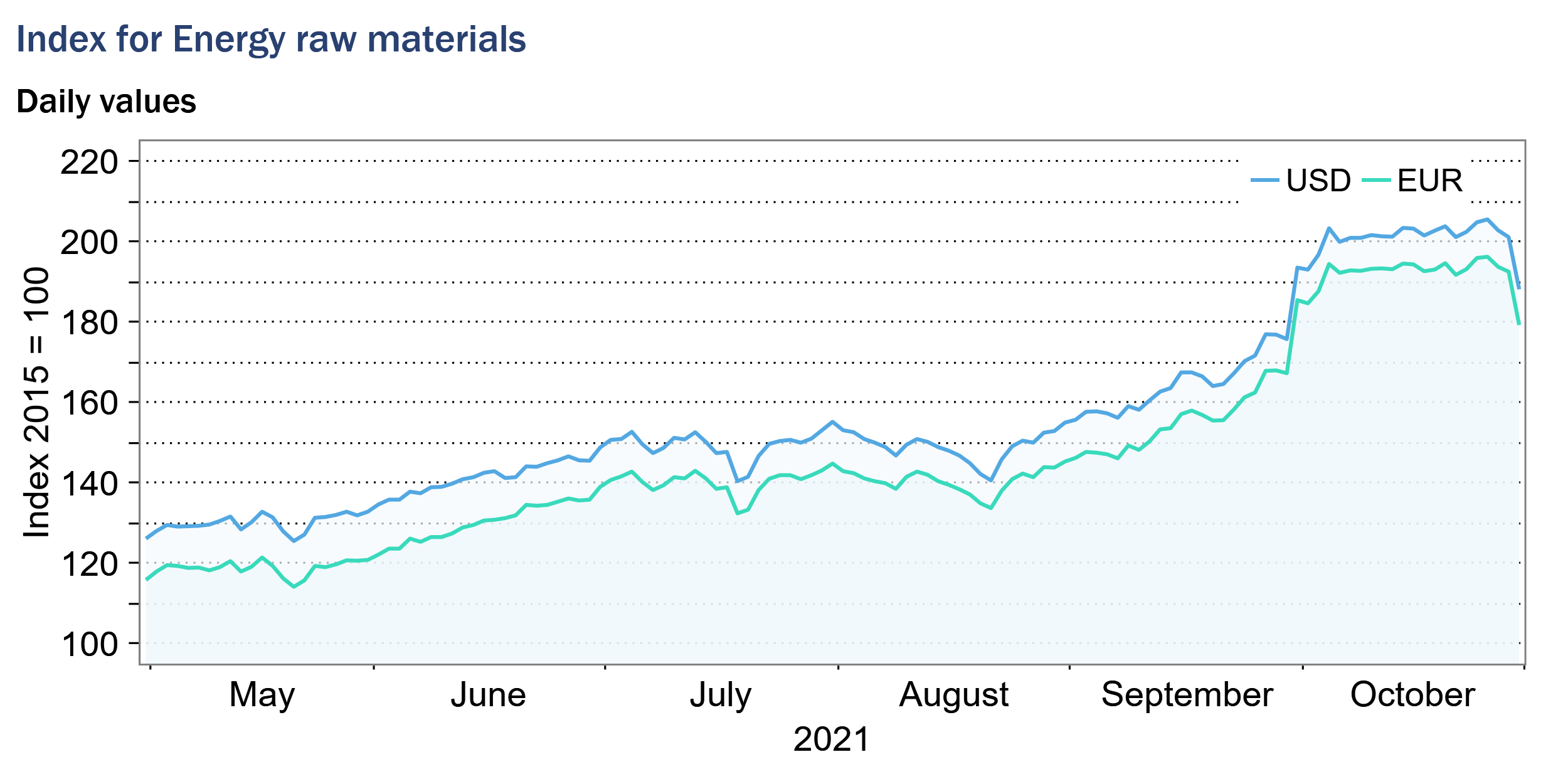 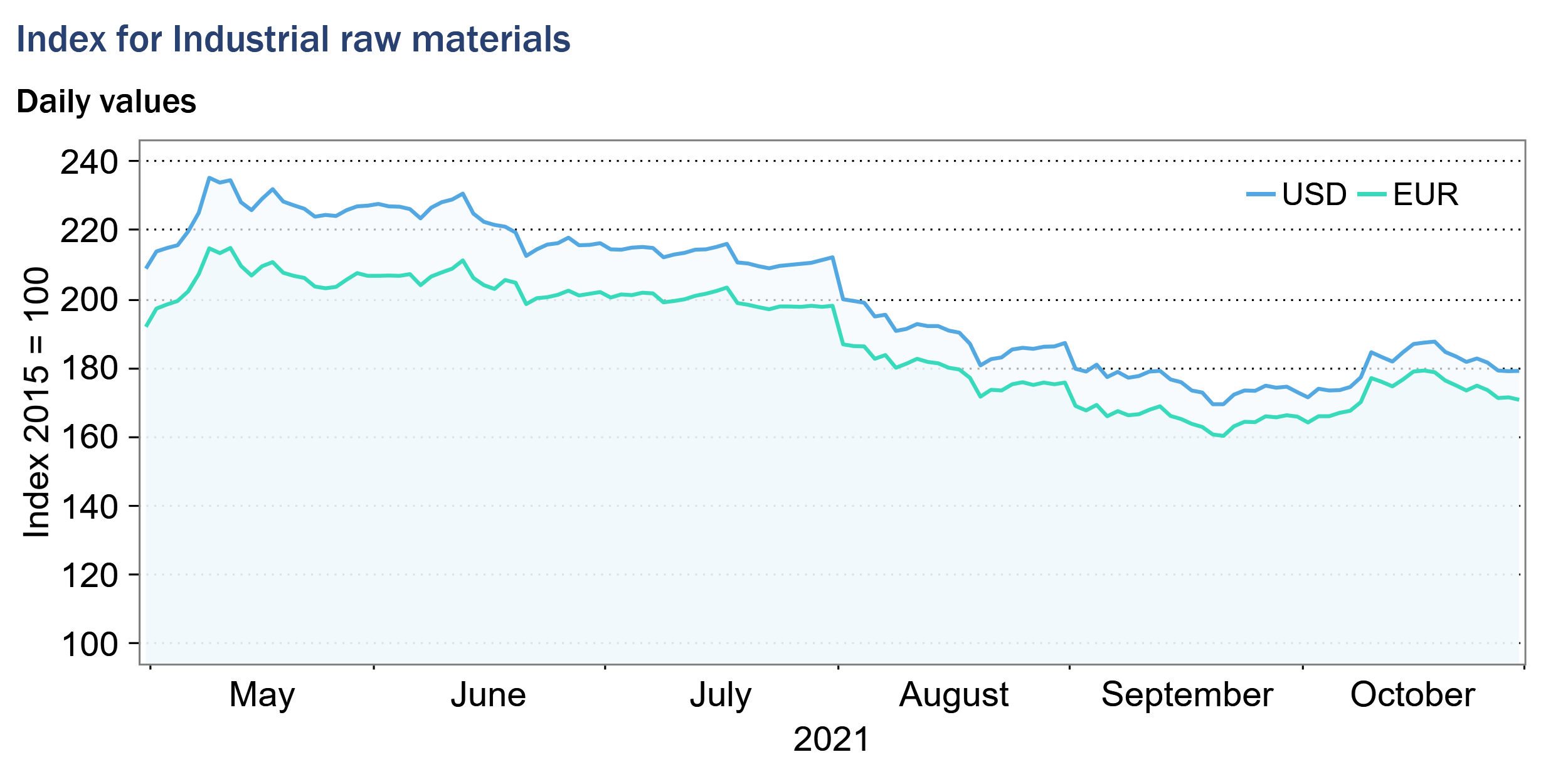 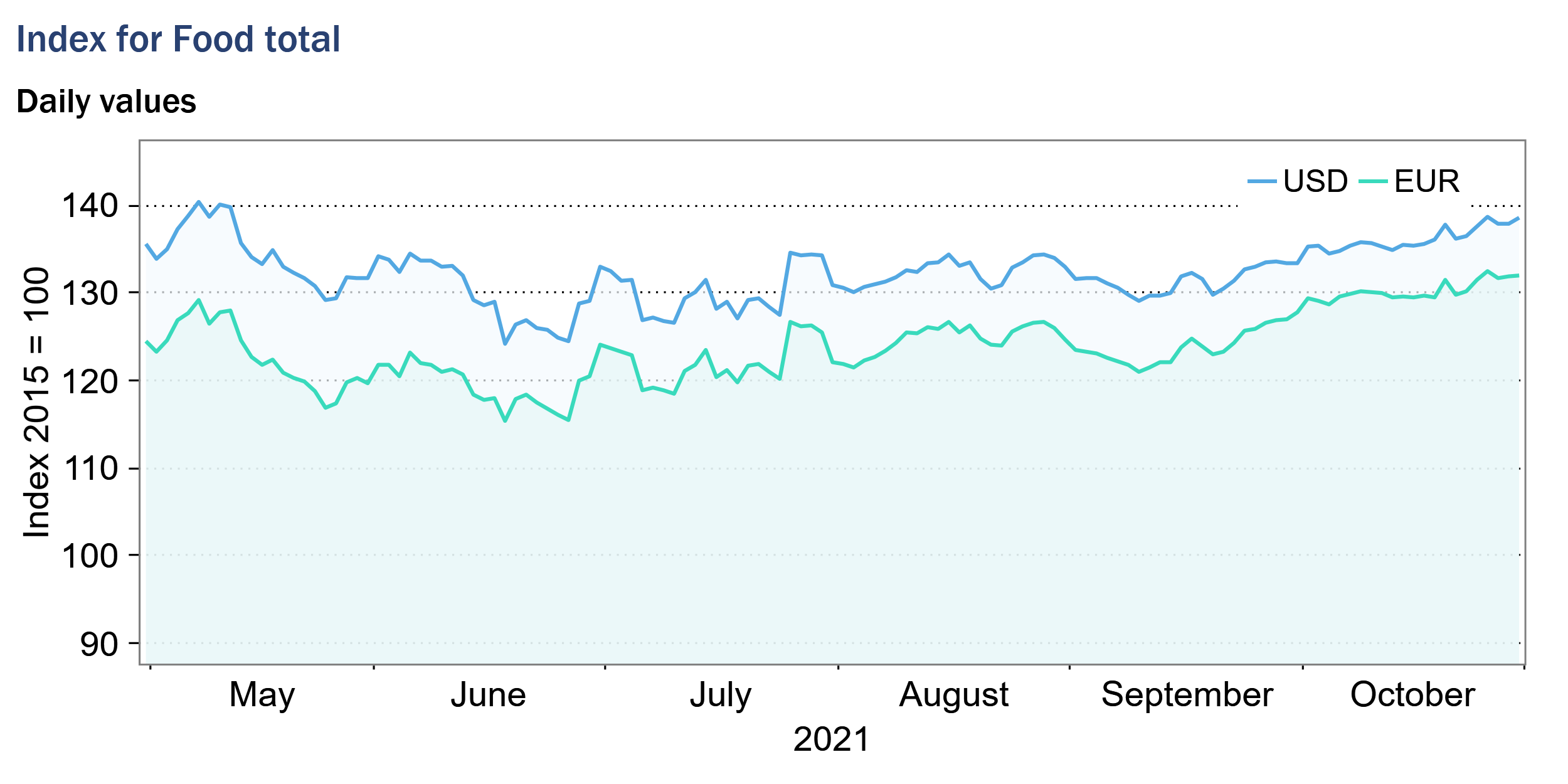 The industrial commodities sub-index, which is divided into the agricultural commodities index, the non-ferrous metals index and the iron ore and steel scrap index, rose by 2.8% in October compared to the previous month.

The sub-index for iron ore and steel scrap fell on average in October, but to a lesser extent than a month earlier. The price decline was due to a slump in Chinese demand. Chinese steel production continued to be curtailed, on the one hand in response to the current electricity shortage in China and on the other hand to curb climate-damaging emissions.

On the contrary, prices for non-ferrous metals rose in October compared to the previous month. Prices for non-ferrous metals were driven by the current robust demand and supply disruptions due to the sharp increase in gas and coal prices. Due to the high cost of energy, mines and refineries had to cut production. Prices for tin and zinc increased particularly strongly. Zinc rose by more than 20 % in October compared to the previous month and reached a level last seen 14 years ago.

Cotton prices also increased sharply in October, reaching a 10-year high. Various factors were responsible for the price increase. On the supply side, heavy rainfall in important growing regions in the USA impaired the cotton harvest. Besides China and India, the USA is an important producer of cotton. Cotton prices were also supported by the demand side. High oil prices drove up prices for synthetic fibres, which in turn increased demand for cotton. In particular, cotton demand from China, a major importer, increased, and other major textile producing countries such as Bangladesh, Indonesia, Vietnam and Pakistan are also currently experiencing high demand.

Timber prices rebounded strongly in October after falling back to pre-crisis levels from their peak in May. Demand for sawn timber has increased again due to lower prices and supply is currently tight again. In Canada, some sawmills had to cut production due to cost increases and some sawmills in the USA could not produce as usual due to labor shortages.

On the markets for barley, maize and wheat, the positive price trend continued in October due to increased demand combined with reduced supply. Wheat supply was further weakened by extreme weather conditions in the main growing regions. In Russia, North America and Argentina the wheat harvest was affected by drought, and in the European producing countries heavy rainfall impacted crop yields. Wheat prices reached a high in October that has not been exceeded since 2000. Barley prices continue to benefit from higher wheat prices, as barley is also considered an important animal feed and thus a substitute for wheat. In addition, overall grain prices were driven by higher fertiliser prices. Due to the current high gas prices, some fertiliser producers had to stop production, which tightened the supply of fertilisers.

Compared to the previous month, prices for vegetable oils rose sharply in October, especially for coconut oil and palm oil. This is also due to a poor harvest and thus tight supply. Labor shortages triggered by lockdown measures due to the Corona pandemic in producing countries, especially in Malaysia, continue to affect palm oil production. In addition, global demand for vegetable oils for biofuel production is currently increasing due to the rise in oil prices.

Prices for luxury food also continued to rise in October compared to the previous month. Especially coffee prices recorded a strong increase of 6.8% compared to September. This means that coffee prices were on average more than 70 % higher this October than last year. The impact of the extreme drought at the beginning of the season and following frost on the Brazilian coffee crop continues to be noticeable in high coffee prices.