(Hamburg, December 9, 2021) The HWWI commodity price index fell in November after rising sharply in previous months. Compared to October, the index value fell by 8.6 % and was thus on average 92.6% higher than in November a year ago. The price decline is due to the sharp price losses on the energy commodity markets. The strong upward trend in energy commodity prices, which had been going on for several months, was interrupted in November as the new virus variant caused uncertainty on the commodity markets. Prices for industrial commodities also declined in November, especially for iron ore and aluminium. In contrast, prices for food and beverages increased on average in November compared to the previous month.

Crude oil prices fell by an average of 2.9% in November compared to the previous month, after rising sharply in the months before. Prices for the European reference Brent crude began the month at around US$ 85 per barrel and ended it at US$ 70 per barrel. Prices for the US reference grade WTI even fell to $66 per barrel at the end of the month. However, this still left the average crude oil prices in November almost 85% higher than the corresponding value of the previous year.

The price drop was triggered by the appearance of the new virus variant Omicron. The new, rapidly spreading virus variant is currently causing uncertainty on the crude oil markets. The effects of the new Omicron virus variant on the pandemic situation and thus on the global economy cannot yet be estimated. Should the new virus variant lead to renewed global lockdown measures, this would have a considerable impact on global crude oil demand. Despite lower crude oil prices, at the beginning of December OPEC+ announced that it would stick to the planned gradual increase in oil supply.

In addition to crude oil prices, prices for other energy commodities also fell in November. Both Australian and South African coal prices went down significantly in November compared to the previous month. After coal prices had risen sharply in recent months and reached record highs, the Chinese government intervened in the market and introduced price caps for domestic coal. The measure led to panic selling and caused prices to decline on the world markets for coal.

Prices for natural gas also fell in November compared to the previous month. In particular, prices for European natural gas, which had exceeded record highs in previous months, went down by more than 20% on average for the month. One reason for the price decline is that Russia increased natural gas deliveries to Europe again in November. In addition, the mild winter weather in Europe is currently causing lower demand for natural gas, and the new virus variant Omicron is also having a price-dampening effect on the natural gas markets. 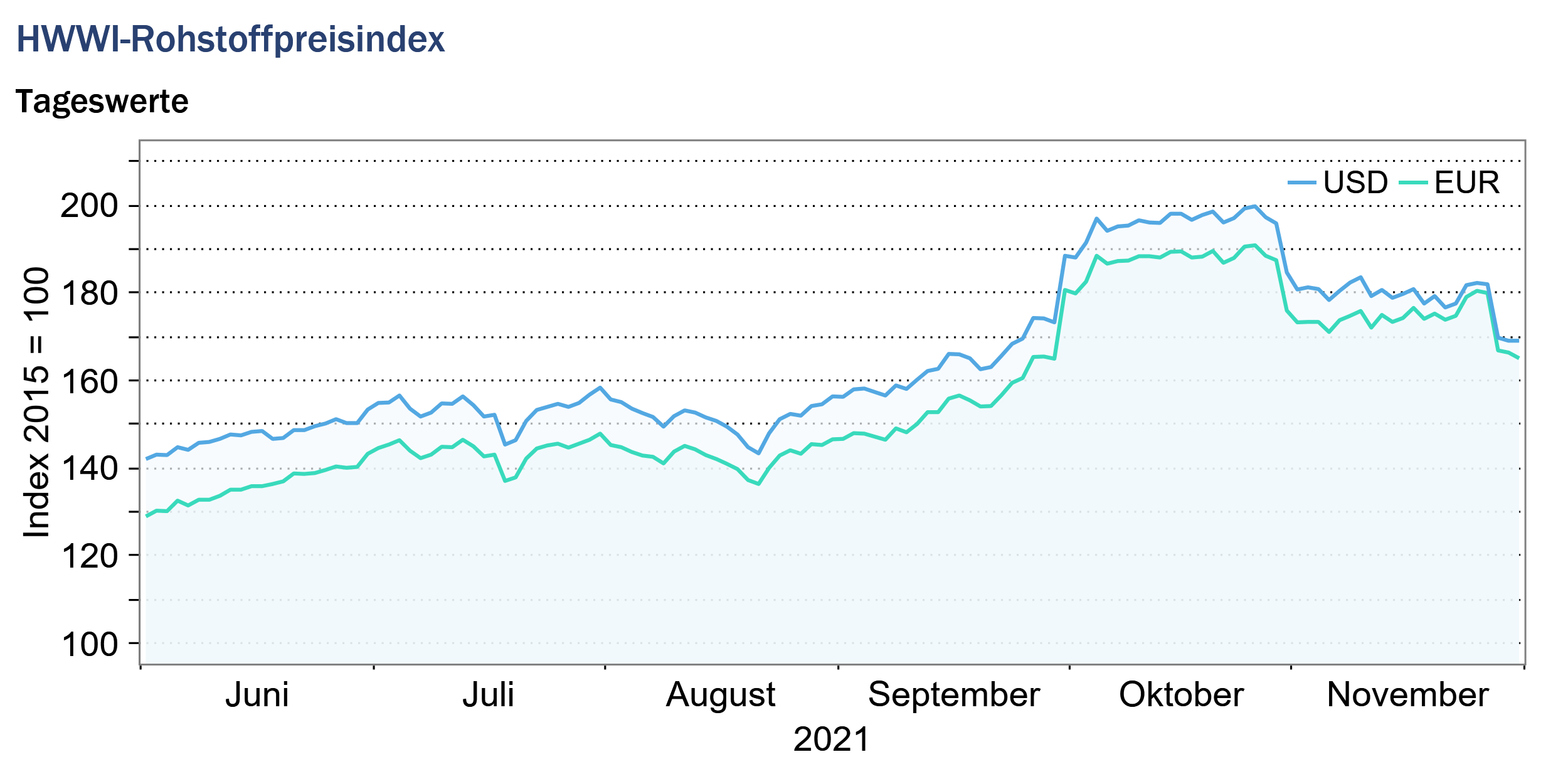 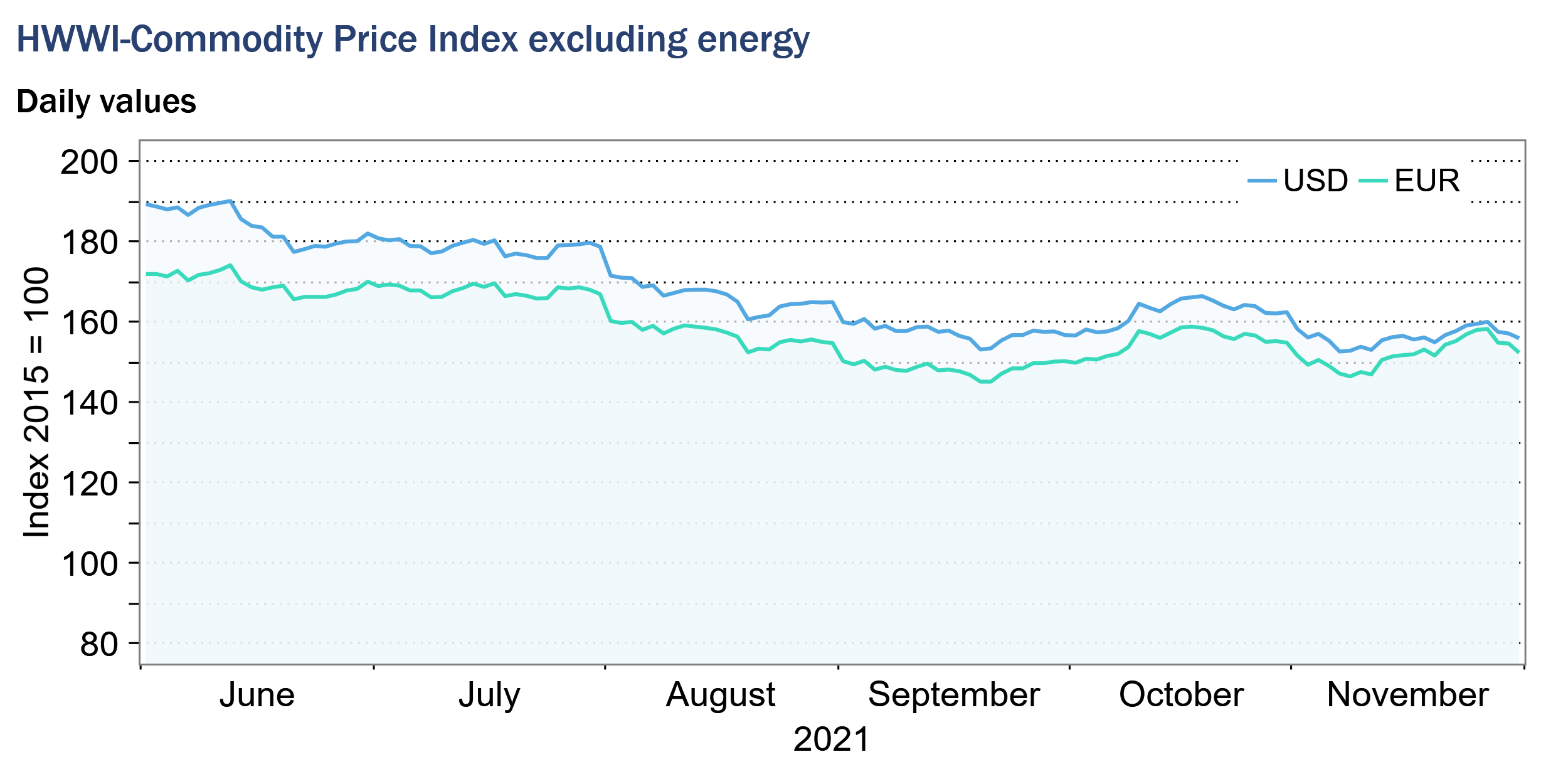 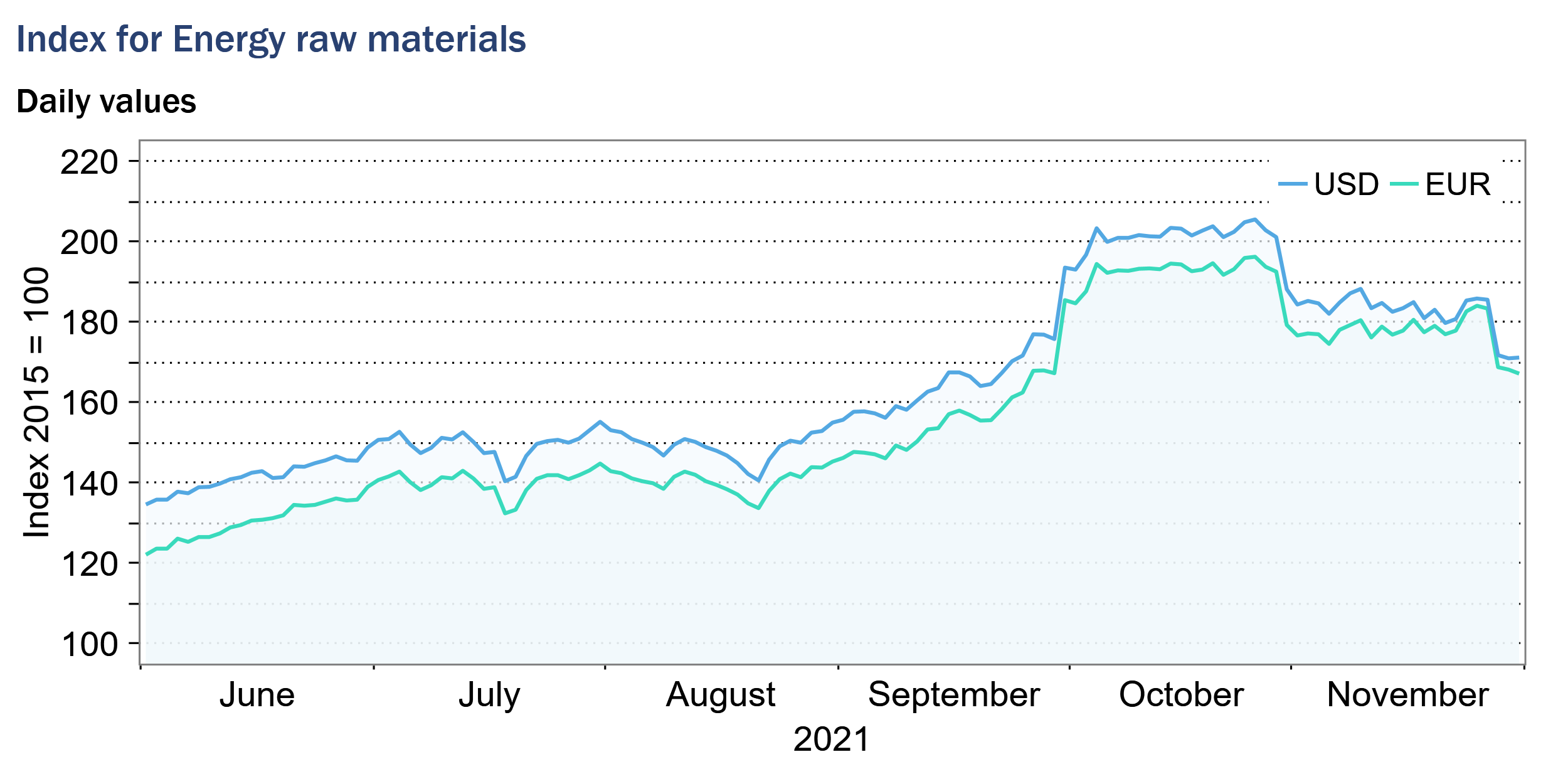 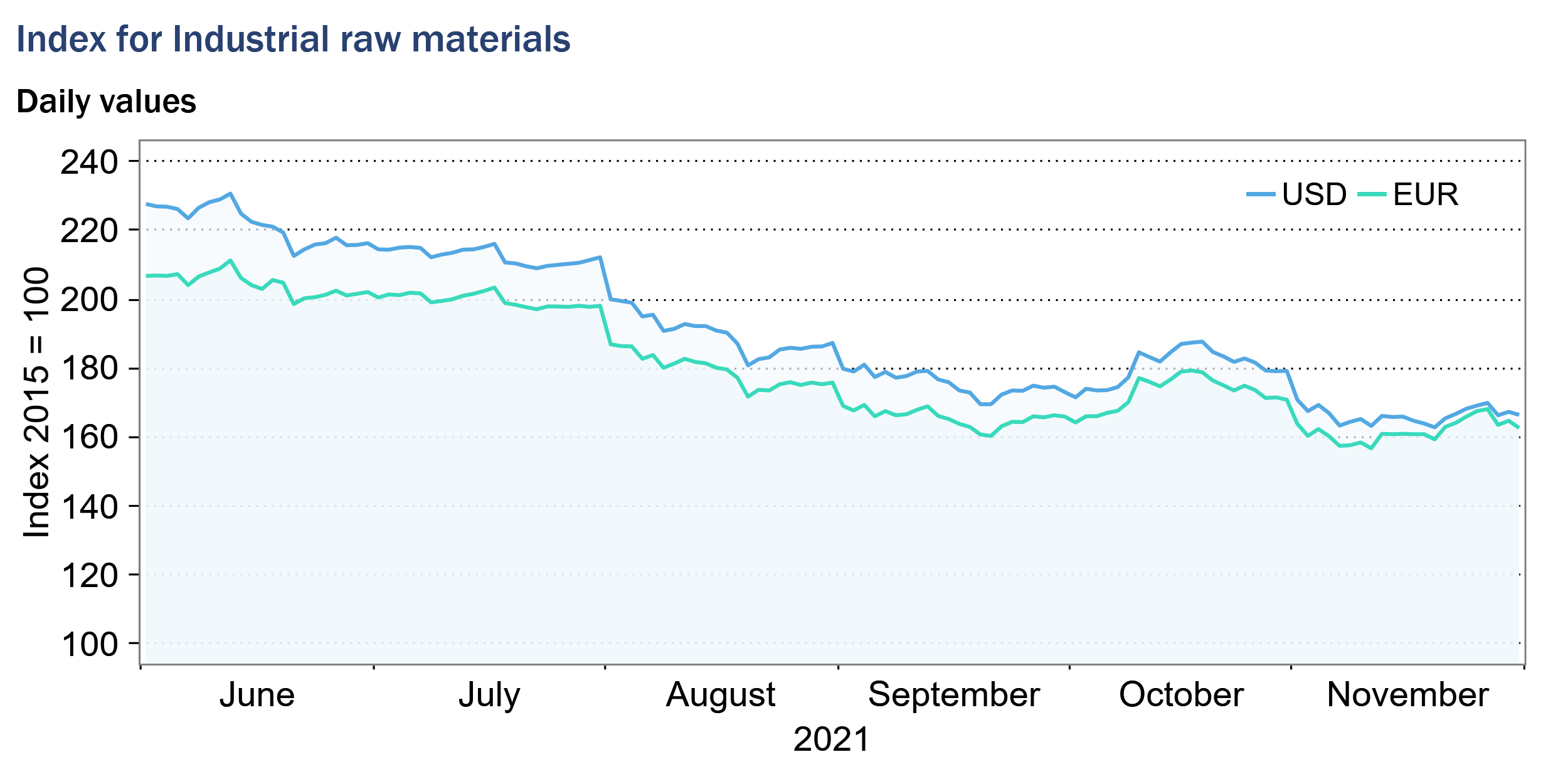 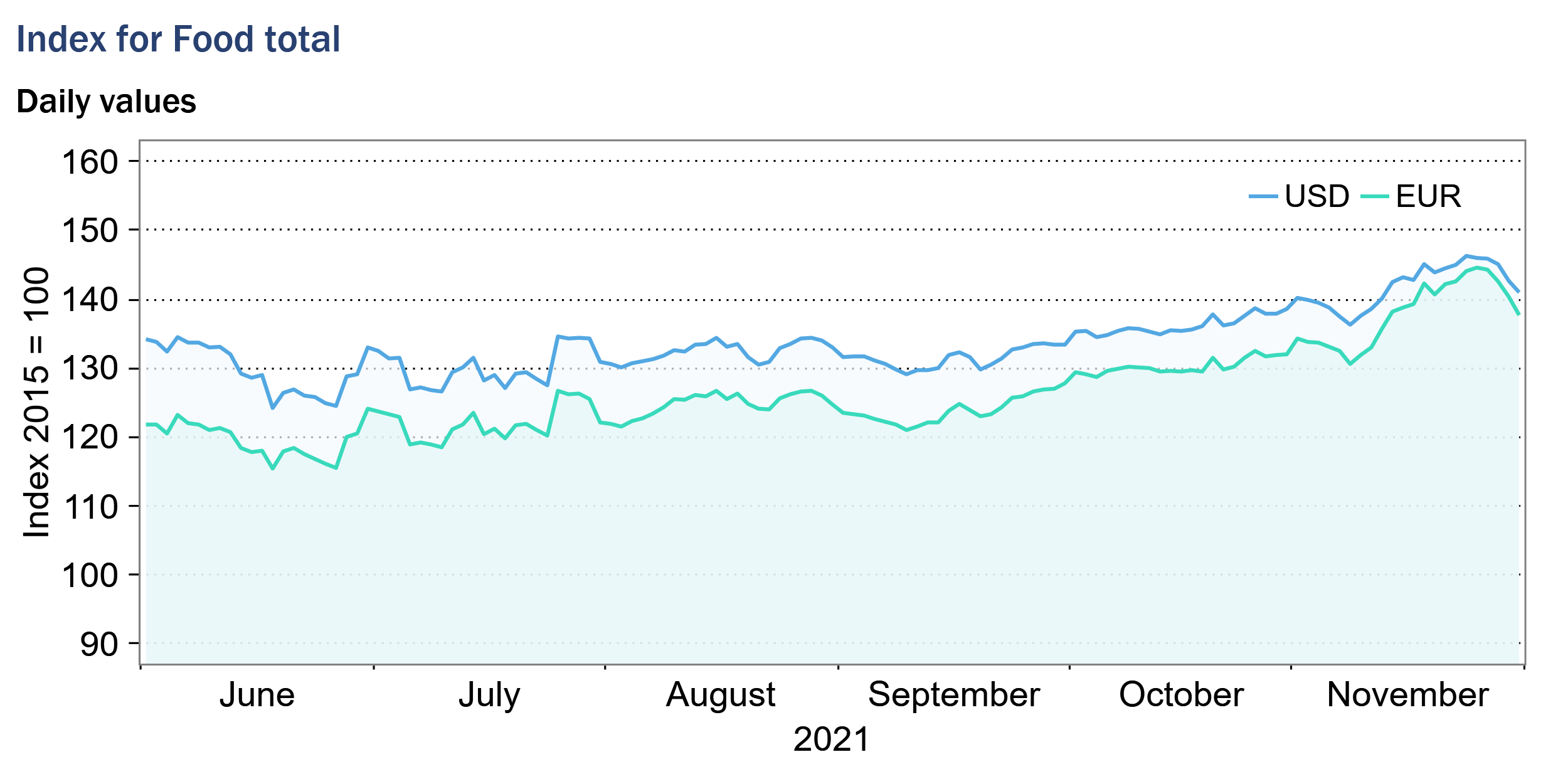 Iron ore prices declined particularly sharply in November, especially in the first half of the month, continuing the downward trend already observed in October. In November, iron ore prices fell by an average of 22% compared to the previous month. The curbing of Chinese steel production with the aim of limiting climate-damaging emissions reduced demand for iron ore and depressed prices. Iron ore prices rebounded at the end of November in response to an increase in Chinese iron ore imports.

The decline in non-ferrous metal prices was due to the sharp drop in prices on the aluminium market. Aluminium prices fell by 10% in November after reaching highs in mid-October. The decline in energy prices led to expectations that the previously curbed energy-intensive aluminium production would be expanded again. In contrast, tin and nickel prices rose slightly compared to the previous month and copper and zinc prices declined slightly on average for the month.

The index for food and beverages rose by an average of 4.2% in November compared to the previous month and was thus 31.7% higher than the corresponding value for the previous year. All three sub-indices, the index for grains, the index for luxury food and the index for oils and oilseeds increased on average in November.
Grain prices increased particularly strongly on average in November compared to the previous month, which was explained by the strong price increases on the markets for maize and wheat. Wheat prices in November approached the highs of 10 years ago. Strong demand for wheat continues to meet tight supply, leading to price increases. Thus, major wheat importers announced large purchase offers in early November. On the supply side, heavy rains in Australia, flooding in Canada and drought in key growing regions of the USA led to a shortage of supply. By the end of the month, however, grain prices, especially wheat prices, had fallen again. The price decline was triggered by the appearance of the new virus variant Omicron and reflects concerns about the consequences of a further spread of Omicron on the demand for grain.

Prices for luxury foods moved in opposite directions in November. While coffee prices continued to rise, cocoa prices fell compared to the previous month. The price of coffee increased by 7.5% compared to the previous month and exceeded its ten-year high. Severe frosts destroyed large areas of coffee plantations in Brazil’s main growing regions and reduced global coffee supply. In contrast, global coffee demand is steadily increasing year after year. In November, supply was further tightened by temporary supply disruptions from Brazil due to container shortages.

The picture was different on the cocoa markets, where further price declines were observed in November. Rainfall in the main growing areas of Côte d’Ivoire supported the cocoa harvest. The decline in cocoa prices could also be due to uncertainty about the new virus variant Omicron. New lockdown measures and contact restrictions could again weaken demand for chocolate and thus cocoa.