Price increases on the energy markets

Crude oil prices recorded an upward trend in June. Prices for European benchmark grade Brent topped US$70 per barrel at the beginning of the month and ended the month just below US$75 per barrel. Prices for the U.S. reference grade WTI moved in parallel with the Brent price, with an average difference of around minus 2 U.S. dollars. The recovery of the global economy and the associated increase in demand for crude oil continued to have a price-driving effect on the crude oil markets in June. However, global vaccination progress, which provided a positive outlook for the world economy, was offset by the rapid spread of virus mutations. Thus, concerns about a renewed imposition of lockdown measures in June increased uncertainty in the crude oil markets.

In addition, price developments on the crude oil market in June were influenced by expectations about the outcome of the negotiations between the OPEC+ countries scheduled for early July. Once again, the OPEC+ alliance is struggling to agree on a joint production strategy. While Saudi Arabia still aims to keep the oil price stable by cutting supply, Russia is in favor of increasing crude oil supply.

The markets for coal saw sharp price increases in June. While South African coal prices rose by an average of 12% month-on-month, Australian coal prices increased by as much as 24.8% on average for the month. Although there is a global push to decarbonize the economy, coal prices are currently at highs that have not been exceeded in 10 years. Due to China’s ban on Australian coal imports, coal supply chains have had to be reorganized. China is relatively self-sufficient in coal compared to other commodities, importing only about 20% of its own coal consumption. In absolute terms, however, China’s imports play a major role on the world market. Distorted trade flows due to the trade dispute between China and Australia and a weakened supply of coal due to mine closures in Colombia and floods in Indonesia and Australia drove up coal prices in June. 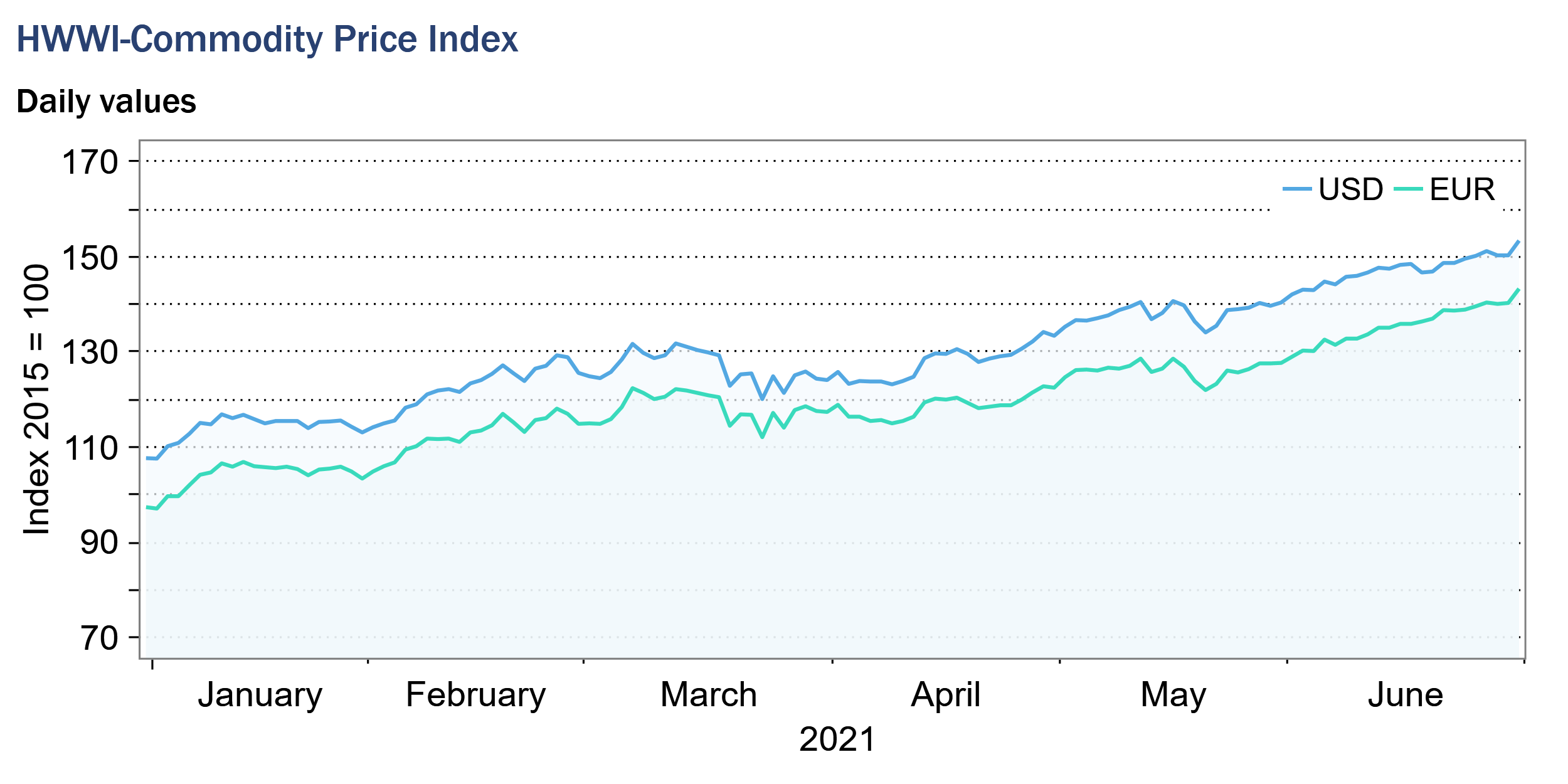 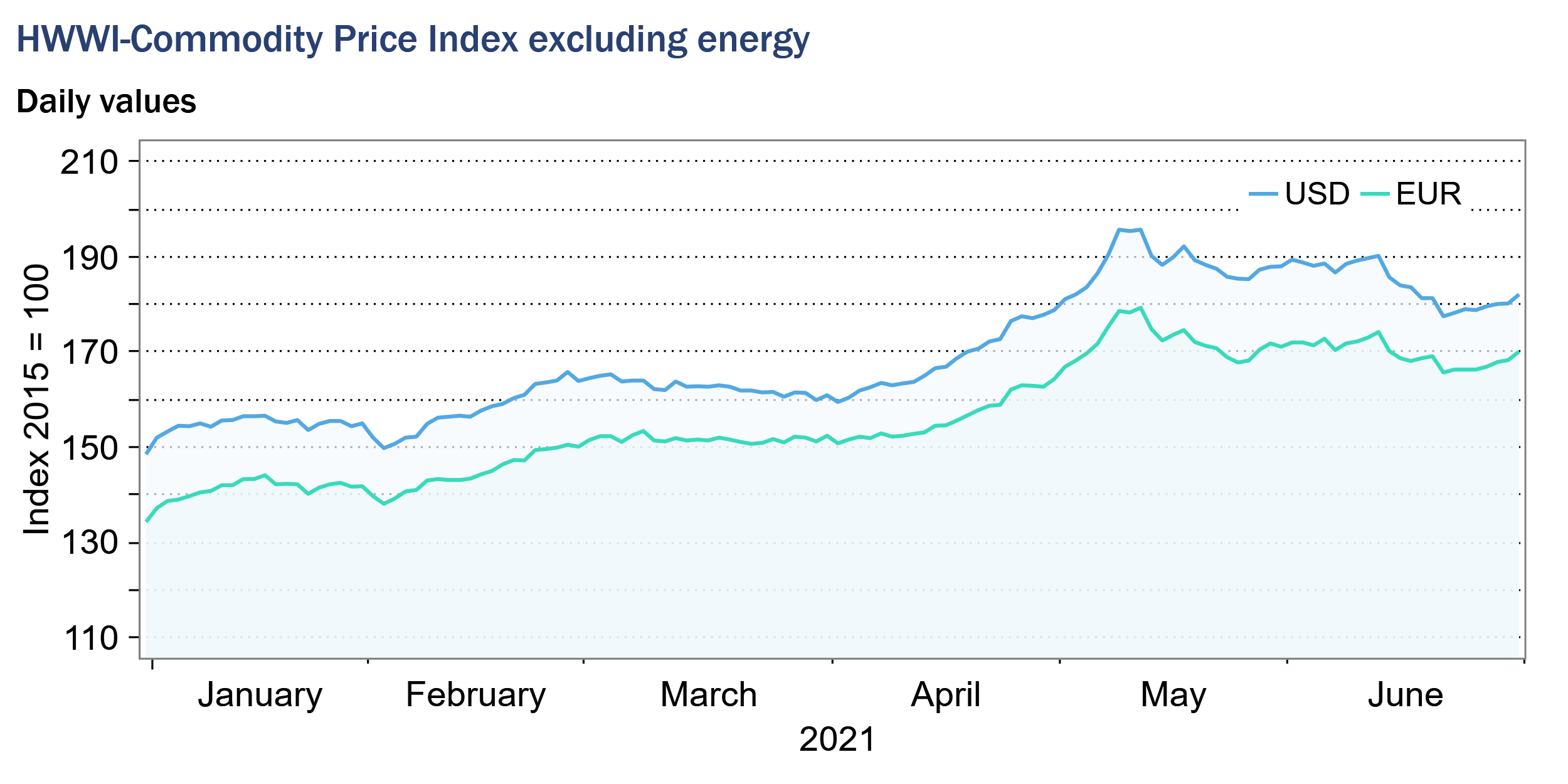 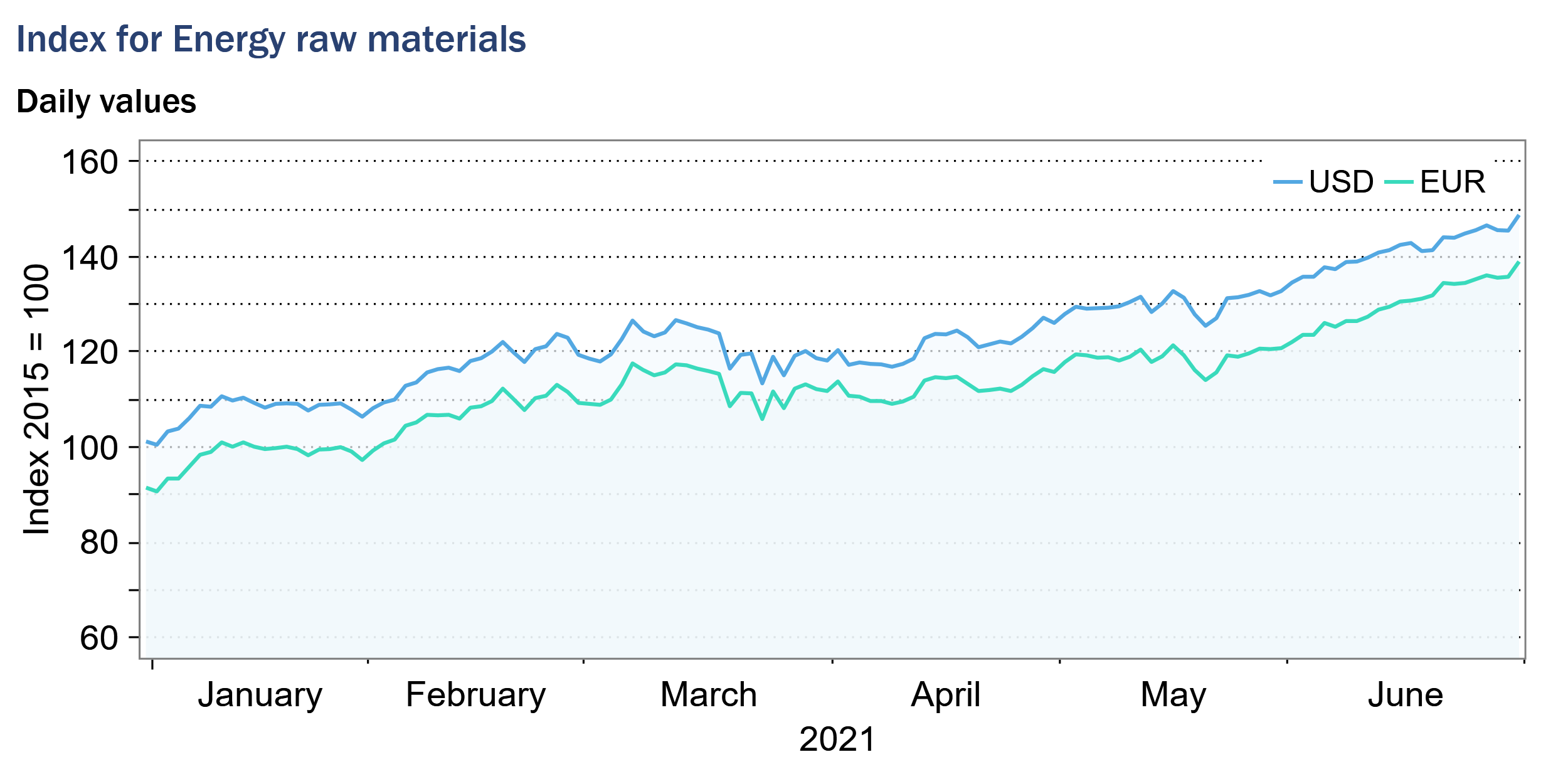 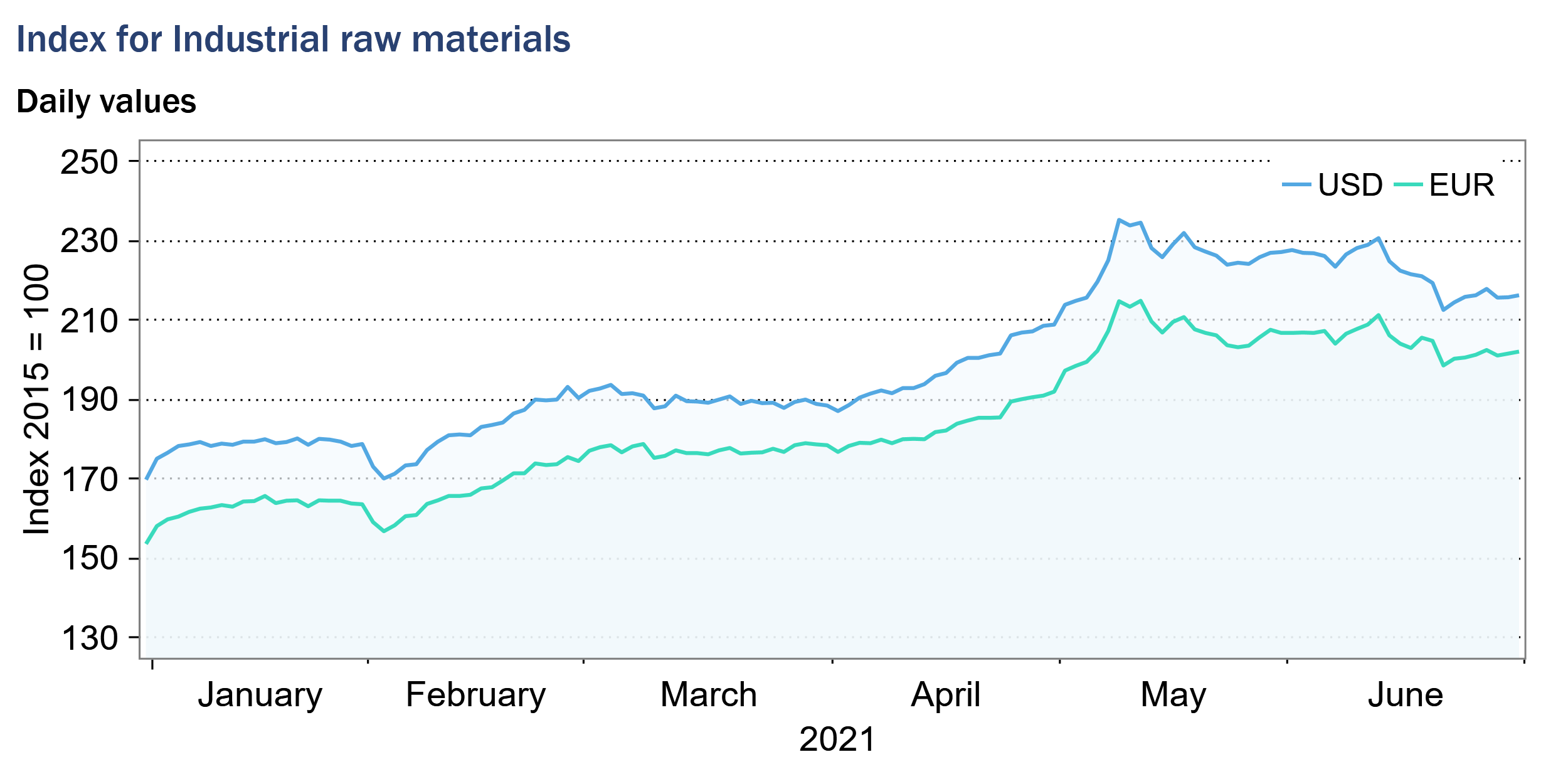 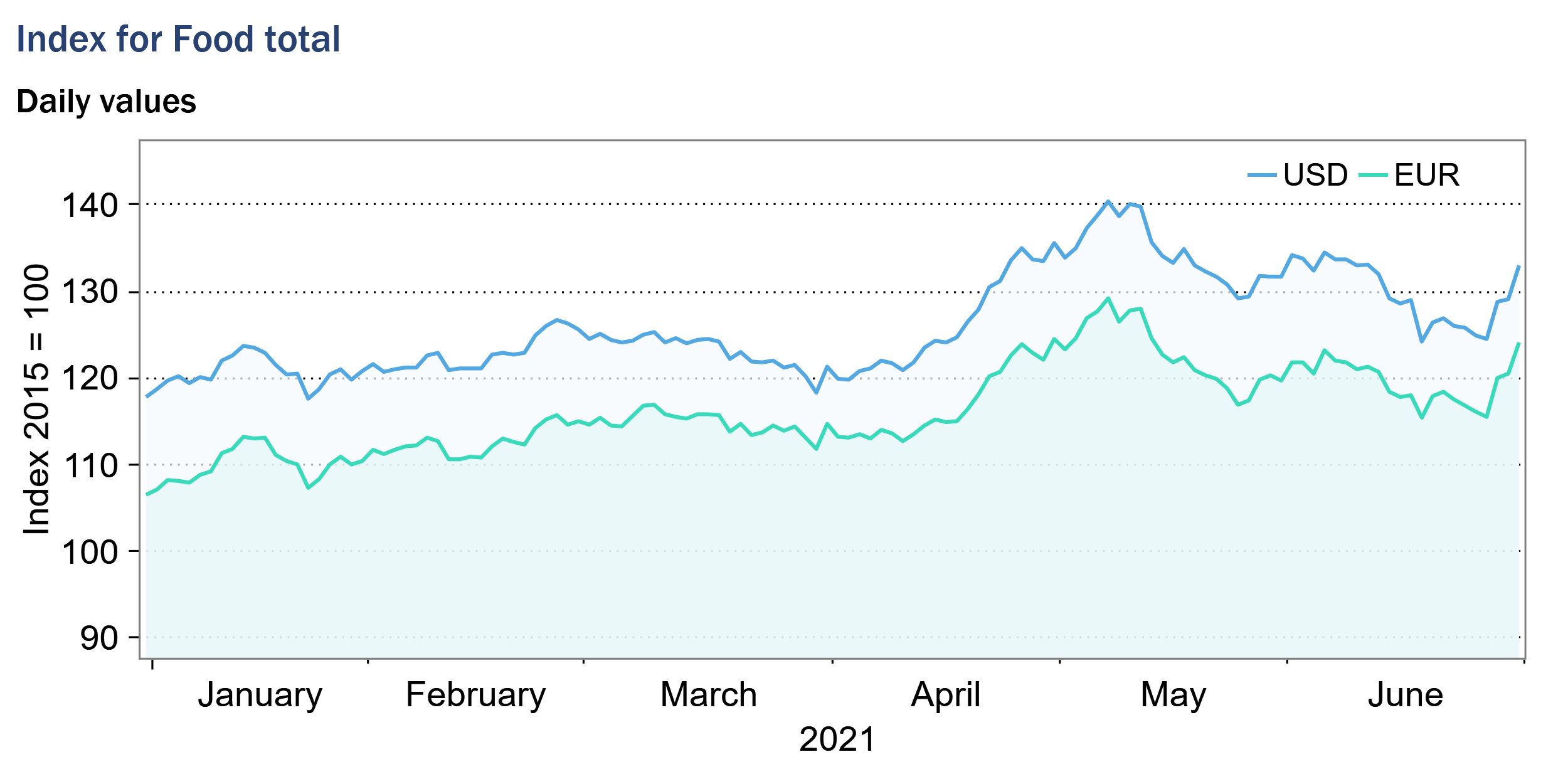 The sub-index for nonferrous metals fell by an average of 1.9% in June compared with the previous month, due to price declines on the markets for copper and zinc. To counter the extreme price increases on the copper markets in recent months, China sold copper from government stocks. As a result, copper prices fell by an average of 5.5% from the previous month. The Chinese authorities announced the same course of action for aluminum and zinc.
The iron ore markets also saw only slight price increases in June compared with the previous month. The reason given for the development on the iron ore markets is that China has to reduce its steel production in order to meet its CO2 emission targets.

Prices on the pulpwood and lumber markets also fell on average in June after rising sharply in previous months. U.S. sawmills, which have been unable to meet the rising demand for construction lumber for months, have now expanded their production capacities. In addition, it can be observed that construction projects have been postponed due to the increase in raw material prices, which also weakened demand.

The index for food and beverages fell by an average of 3.4% in June compared with the previous month. While the sub-indices for grains and for oilseeds and oils recorded price declines, the sub-index for luxury foods rose on average for the month.

Prices for grains such as corn, wheat and barley, most of which have seen price increases in recent months, fell on average in June compared with the previous month. After a long drought, rainfall in harvesting regions led to an improvement in crop forecasts and thus to a decline in prices.
In addition, a court ruling in the USA in June depressed prices for raw materials used to produce biofuels, such as corn and vegetable oils. Oil refiners can now apply for exemptions from the federal law requiring the blending of ethanol and other biofuels. Prices for sunflower oil in particular reacted with sharp declines.

By contrast, prices for luxury foods rose on average in June compared with the previous month. Prices for coffee and tea in particular rose compared with the previous month and continued to be driven by unfavorable weather conditions in the harvesting regions. Following prolonged drought, frost occurred in key Brazilian growing regions, which could affect future coffee and sugar harvests. In addition, demand continued to be supported by the global economic recovery.

The price of cocoa continued to fall in June compared with the previous month. This was due to high supply, mainly from Ivory Coast and Ghana, and continued weakened demand due to the Corona crisis.