(Hamburg, March 5, 2021) The HWWI commodity price index rose by an average of 7.4 % in February compared to the previous month, exceeding the average value of March 2020 by 24 %. All three sub-indices for energy, industrial raw materials, as well as food and beverages recorded average price increases in February compared to the previous month. Prices for crude oil rose particularly sharply in February, reflecting the positive global economic outlook. Prices for industrial metals and grains also remained at a high level, particularly driven by continued strong demand from China.

In February, crude oil prices again increased sharply, rising by an average of 12 % compared to the previous month. Prices for Brent, the European benchmark, even approached USD 70 per barrel at the end of the month and prices for WTI, the U.S. benchmark, reached record levels of over USD 63 per barrel.

Crude oil prices continued to be driven by the positive global economic outlook due to the progressing vaccinations against the coronavirus. In addition, government stimulus packages and loose monetary policy in the USA strengthened market expectations that the global economy would continue to recover and, as a result, demand for crude oil would increase. However, the spread of new virus mutations continued to increase uncertainty in the markets.

The price increase on the crude oil markets was additionally supported by shortages in crude oil supply. Firstly, the production cuts of the OPEC+ countries to stabilize oil prices during the Corona crisis, continued into February. In January and February, Saudi Arabia even reduced its own production volume beyond the actual agreement. Secondly, due to the extreme onset of winter in parts of the U.S. some U.S. shale oil producers had to temporarily cease production.

However, prices fell again slightly in the last week of February, indicating uncertainty regarding the next OPEC+ meeting in early March. Due to the positive development of the global economy and the rise in crude oil prices, OPEC+ will discuss an increase in production volumes.
While prices for Australian coal rose slightly in February, prices for South African coal recorded small losses. The ongoing conflict between China and Australia influenced trade relations on the coal markets. China continued to maintain its import ban on Australian coal. As a result, India increasingly purchased coal from Australia, offsetting demand from China. 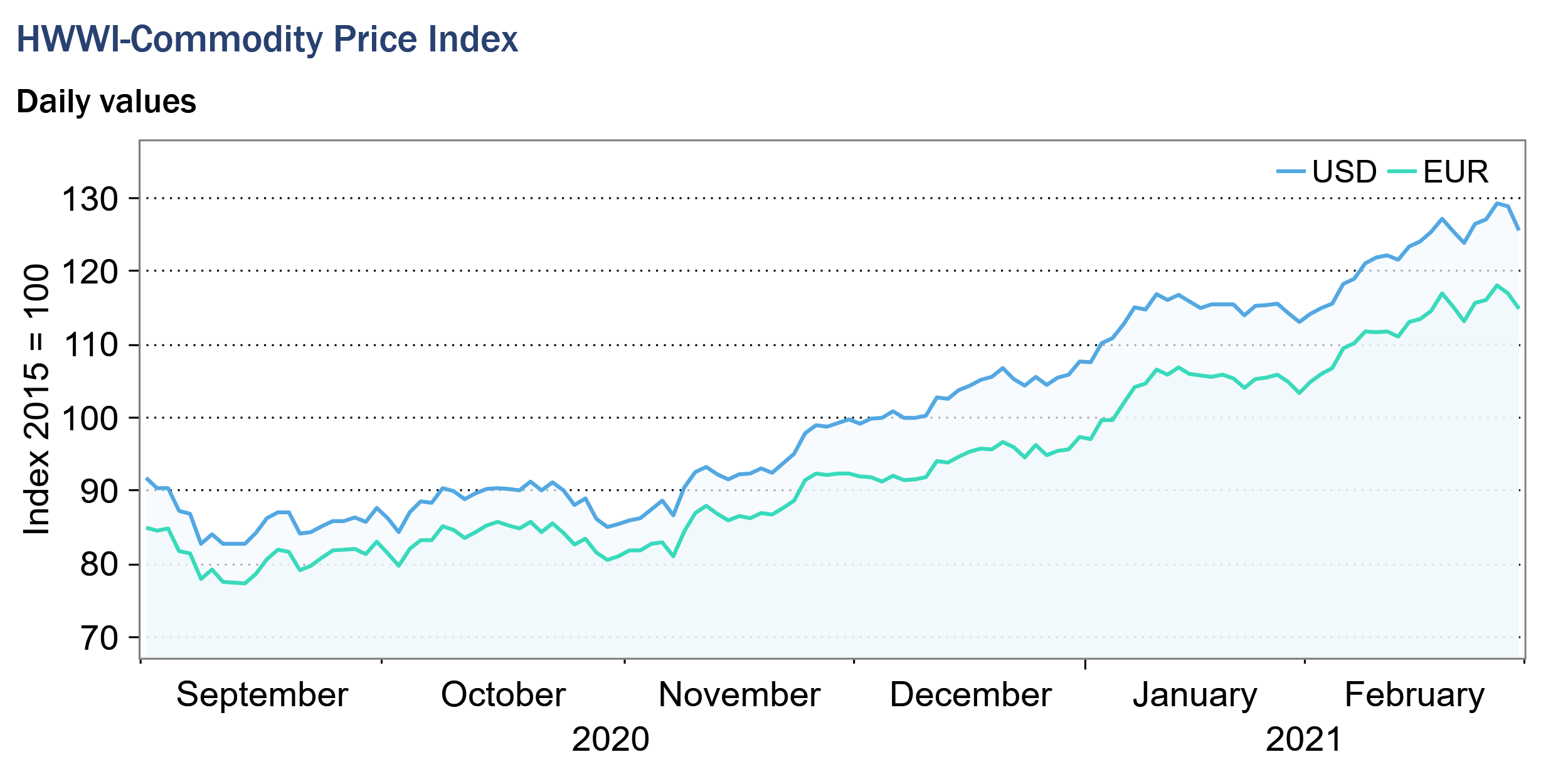 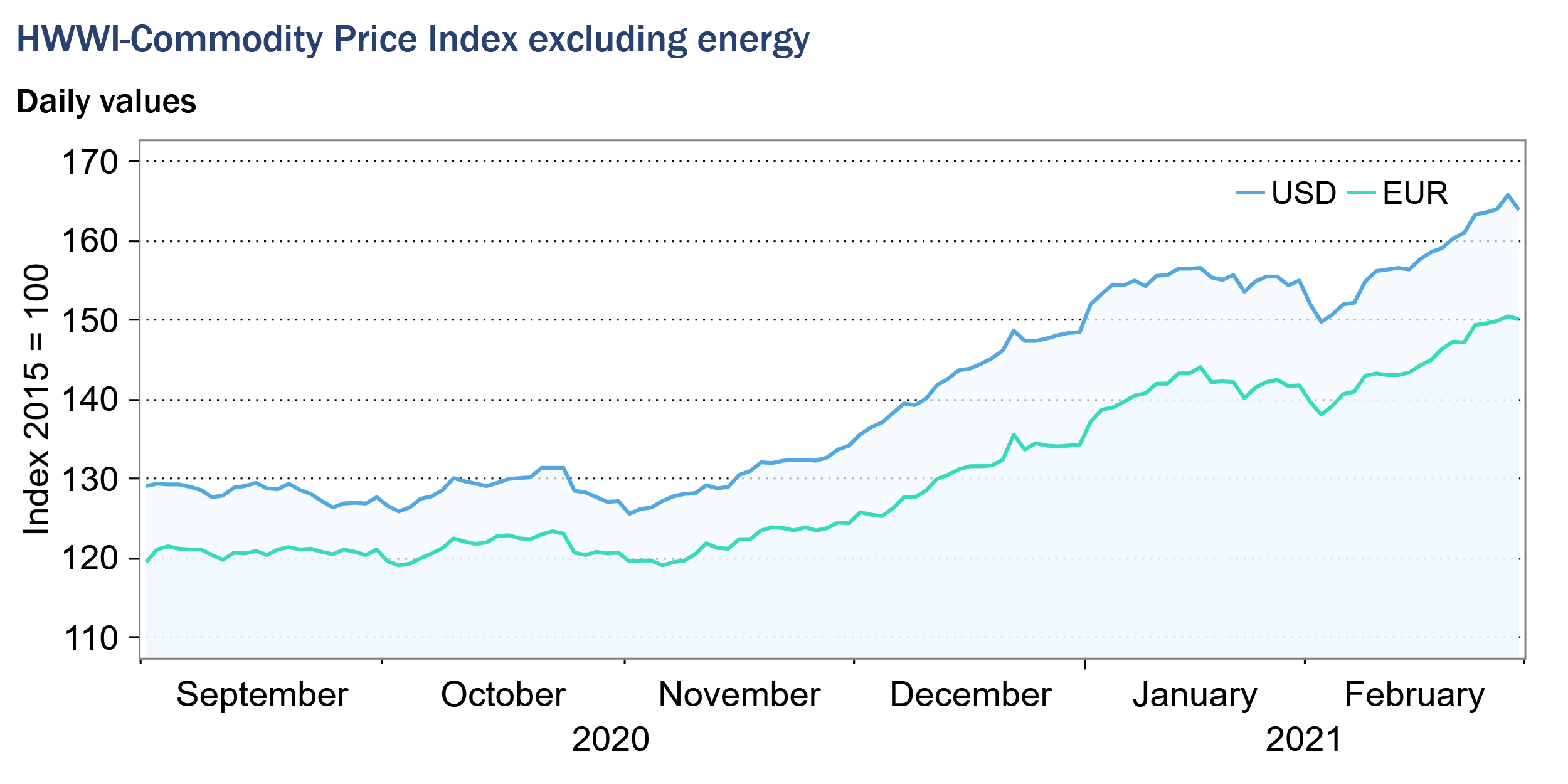 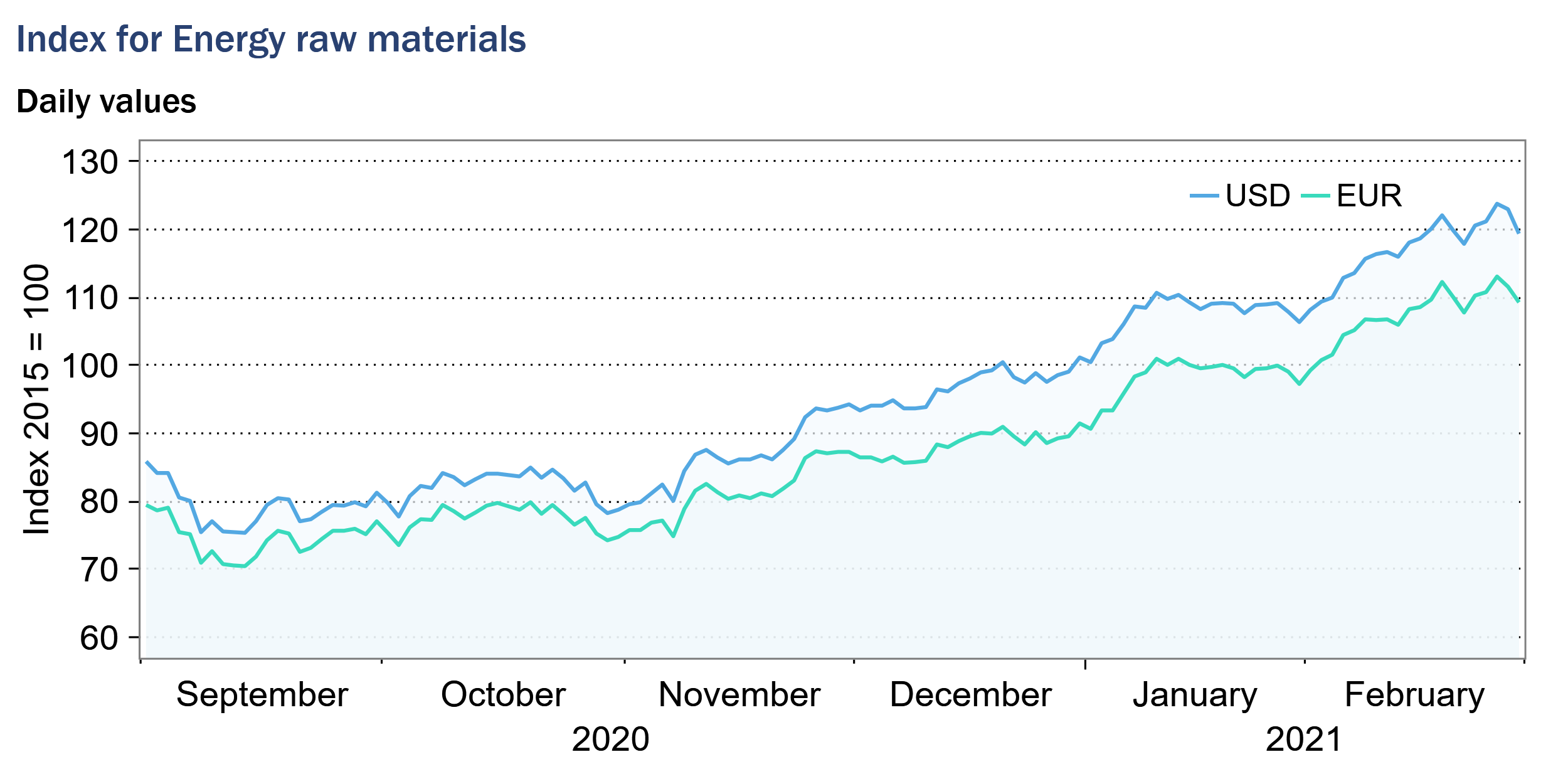 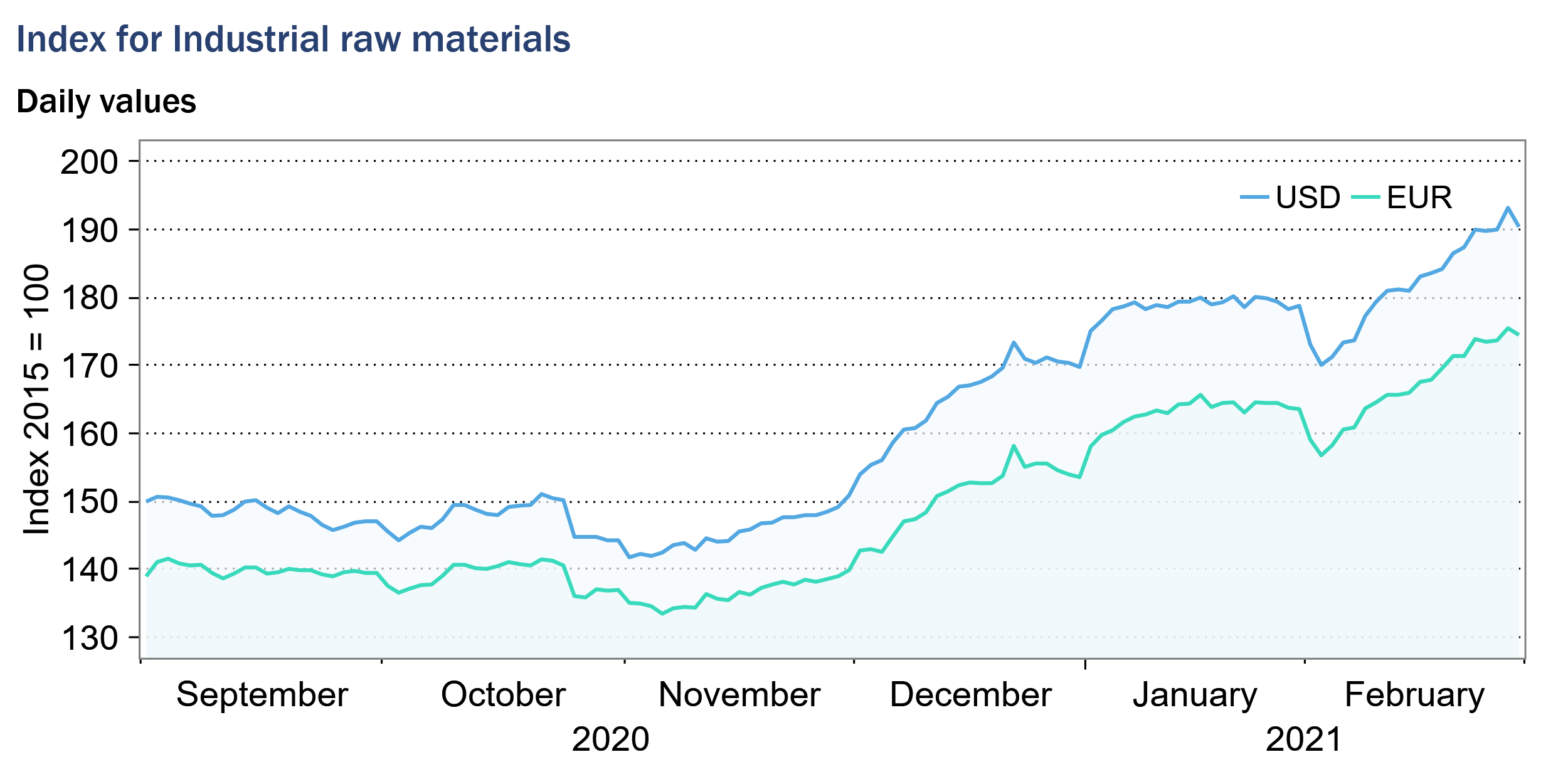 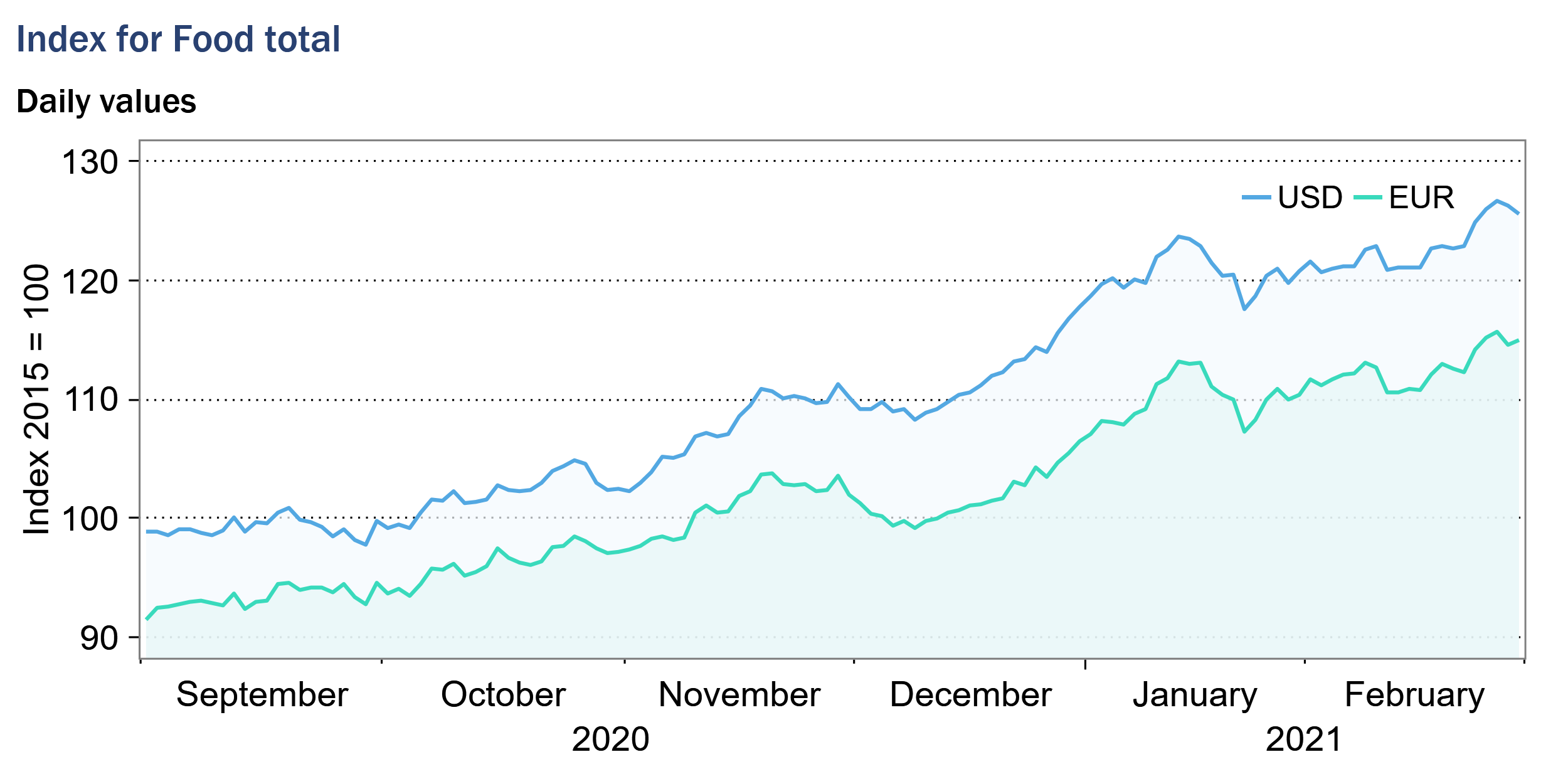 Prices for nonferrous metals remained at a high level in February and mainly recorded price increases compared to January. Tin prices rose particularly strong, recording the highest monthly increase of all commodity prices included in the index in February. Tin prices increased by more than 20% on average compared to the previous month, reaching a new ten-year high. The sharp price increase reflected years of tight inventories and current supply difficulties coupled with rising demand, especially from China. Copper prices continued their rising price trend in February. While temporary mine closures caused by the Corona crisis continued to shorten supply, global demand rose steadily driven by the positive economic outlook. In addition, prices for copper and nickel, among others, were supported by the ongoing electrification of the economy, which is accompanied by a sustained demand for these metals.

Iron ore prices, which had increased strongly in January, decreased on average in February, whereas prices for steel scrap continued to rise in February compared to the previous month. The subindex for agricultural raw materials, which comprises prices for hides, wool, cotton, wood, pulp and rubber, also recorded strong price increases in February.

Prices for barley and wheat rose particularly sharply in February, particularly due to high Chinese import demand. The trade conflict between China and Australia also impacted the grain markets, as China no longer sourced its barley requirements from Australia but predominantly from Europe and Canada. Wheat prices were additionally pushed up in February by the export tax introduced by Russia, which is to be doubled at the beginning of March. Furthermore, the onset of winter in the U.S. caused cold damage to winter wheat, which could affect wheat supplies from the U.S..
At the end of the month, new cases of African swine flu were reported in China, again increasing uncertainty in grain markets. A new outbreak of swine flu in China, which would be accompanied by a reduction in the pig stock, would lead to a significant drop in demand for fodder grains such as corn, barley and soybeans.

On average, vegetable oil markets recorded small price losses in February compared to the previous month. However, compared to February 2020, prices remained at a high level and were on average more than 50 % higher than one year ago. The only exception in February was the price of sunflower oil, with an average price increase of over 7 % compared to January.