Price drop on the markets for iron ore

(Hamburg, September 13, 2021) The HWWI commodity price index fell by an average of 1.3% in August compared with the previous month and was 72.6% above its corresponding year-earlier value. Developments on the commodity markets in August were driven, among other things, by the renewed rise in global infection rates. The decline in the overall index in August was due to falling prices for crude oil and for some industrial raw materials. Prices for coal and natural gas, on the other hand, rose sharply in August compared with the previous month, and some nonferrous metals such as aluminum also recorded price increases. The index for food and beverages also increased on average in August. In particular, prices for luxury foods such as coffee and sugar recorded sharp price increases in August, reflecting the poor harvest conditions in the growing regions in South America.

The development of crude oil prices in August was influenced by the global spread of the delta virus variant, particularly in China, and by the negotiations of the Organization of Petroleum Exporting Countries including Russia (OPEC+). While the U.S. asked OPEC+ to increase production even more than planned to counter the current high gasoline prices, OPEC+ maintained its monthly production increase of 400,000 barrels per day, citing uncertainty about future demand growth due to the spread of the delta virus variant. Crude oil prices for Brent crude, the European benchmark, fell to $67 per barrel by August 20 and then rose to $72 per barrel by the end of the month. The rise in the last week of August was partly due to China, a major buyer of crude oil, announcing late in the month that it had recorded no new local infection figures for the first time since July.

By contrast, coal prices continued to rise sharply in August. While South African coal prices rose by an average of 12.0% compared with the previous month, Australian coal prices increased by an average of 14.6% for the month. The peak of the Australian coal price in 2008 was thus exceeded for the first time in August. The sharp rise in coal prices was due to increased demand, particularly from China, which continues to meet a weakened supply of coal. Due to a drought in the spring in some regions of China, production at some hydropower plants had to be curtailed, whereupon demand for coal increased. The heat wave in several Chinese regions also led to an increase in demand for electricity for the use of air conditioning. In addition to increased demand, there was also a shortage of supply in August as heavy rainfall flooded coal mines in Indonesia. The ban on imports of Australian coal imposed by the Chinese government is still causing a shift in trade routes, which is also driving coal prices. 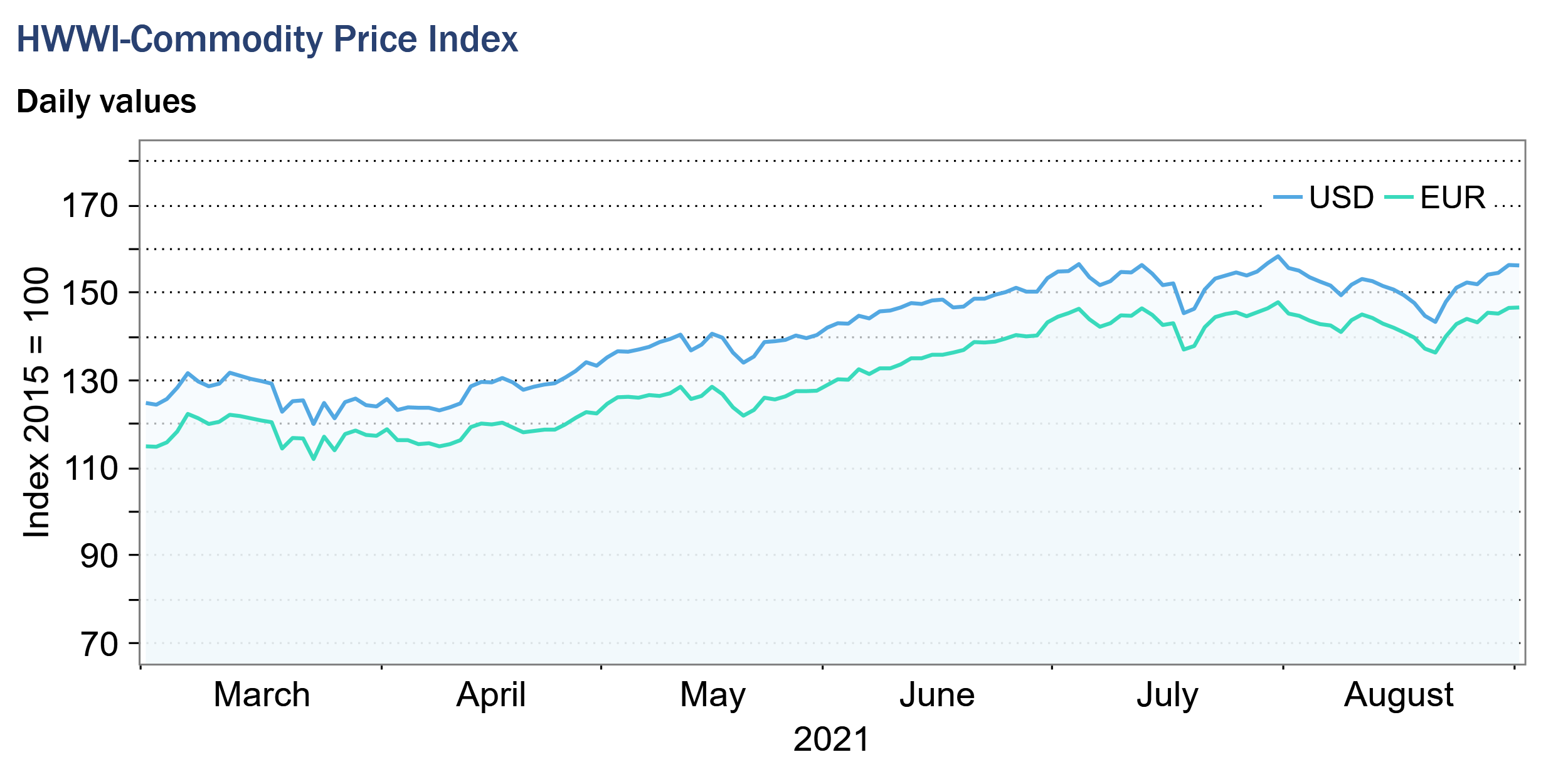 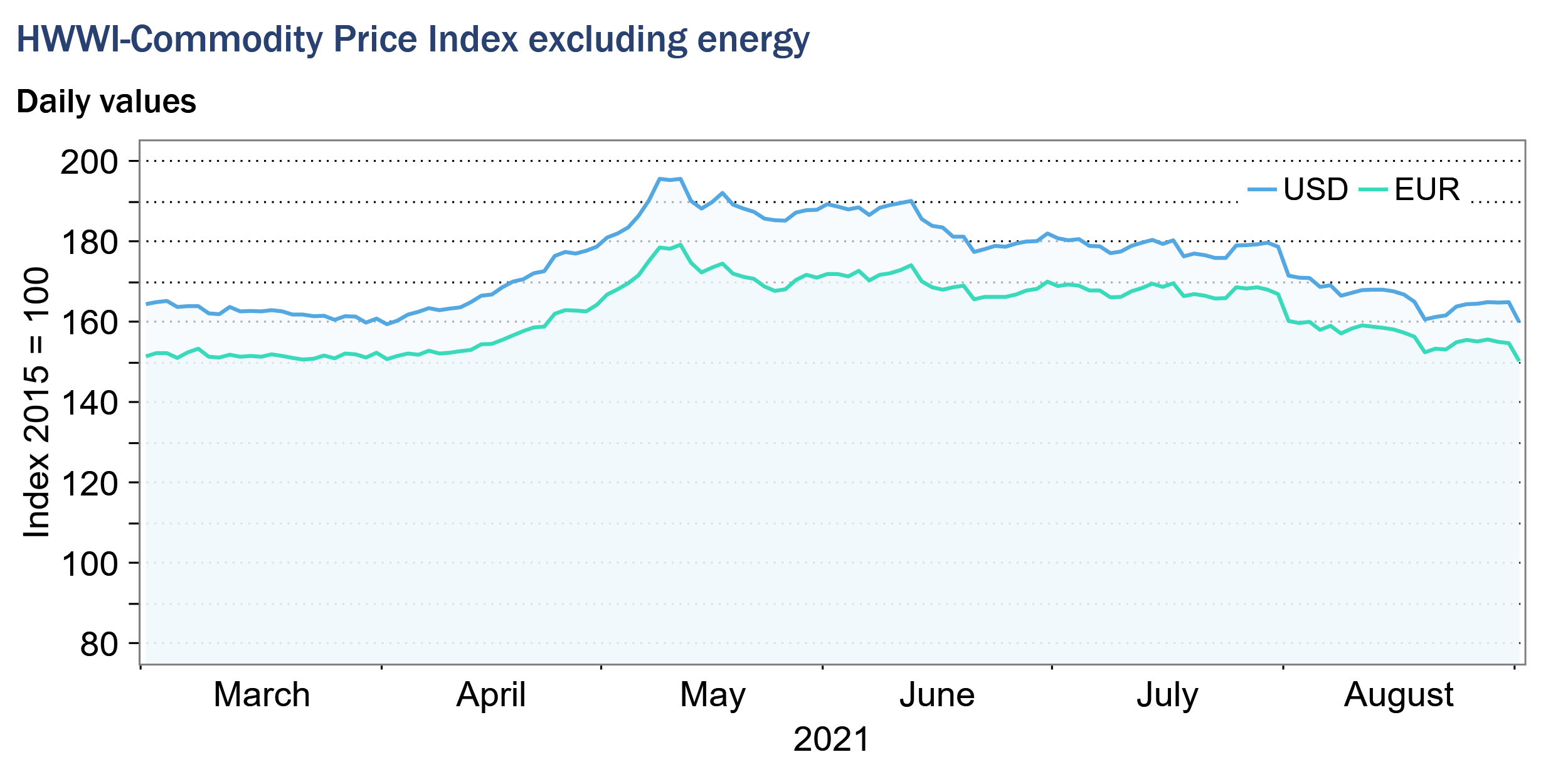 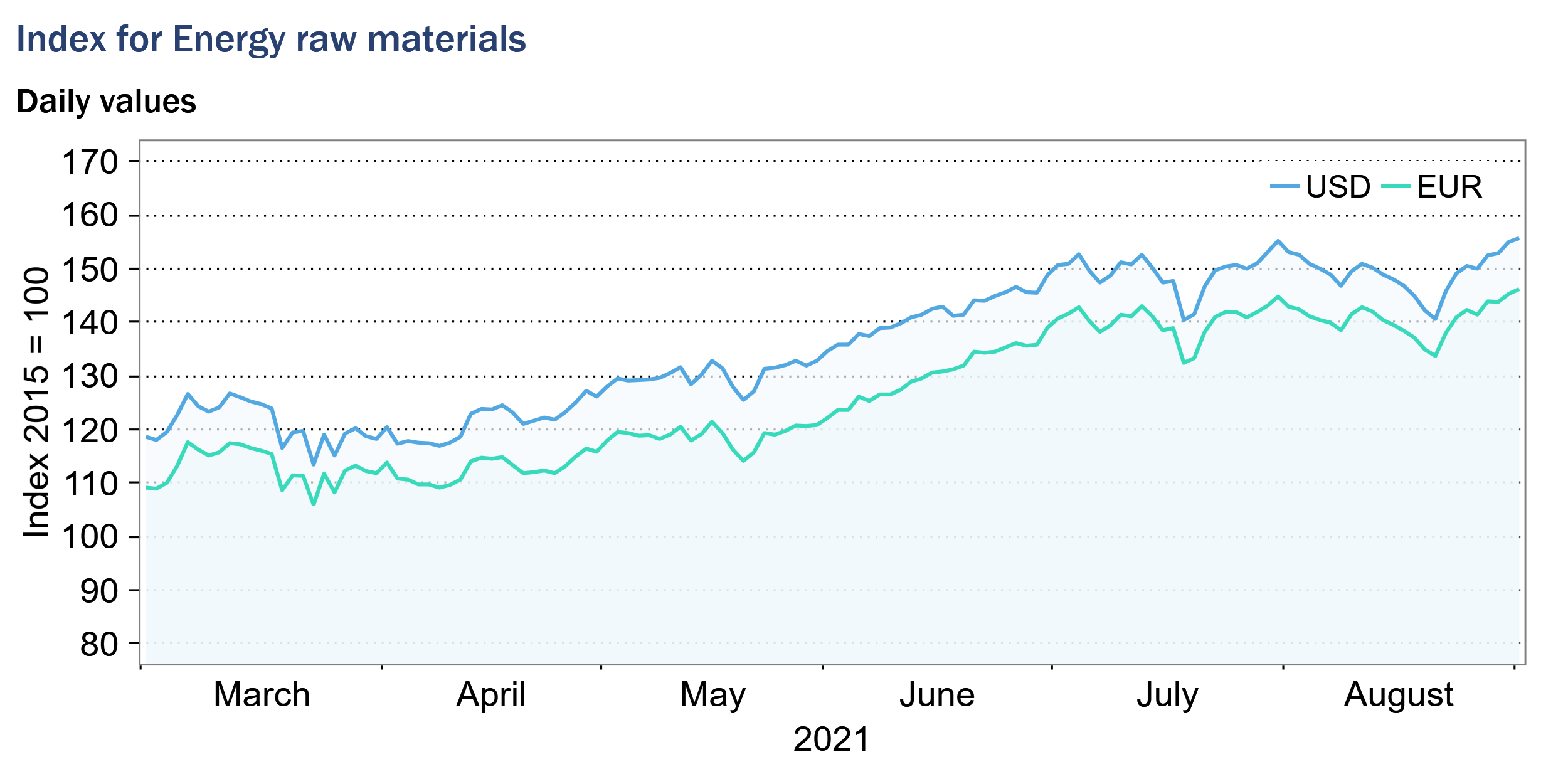 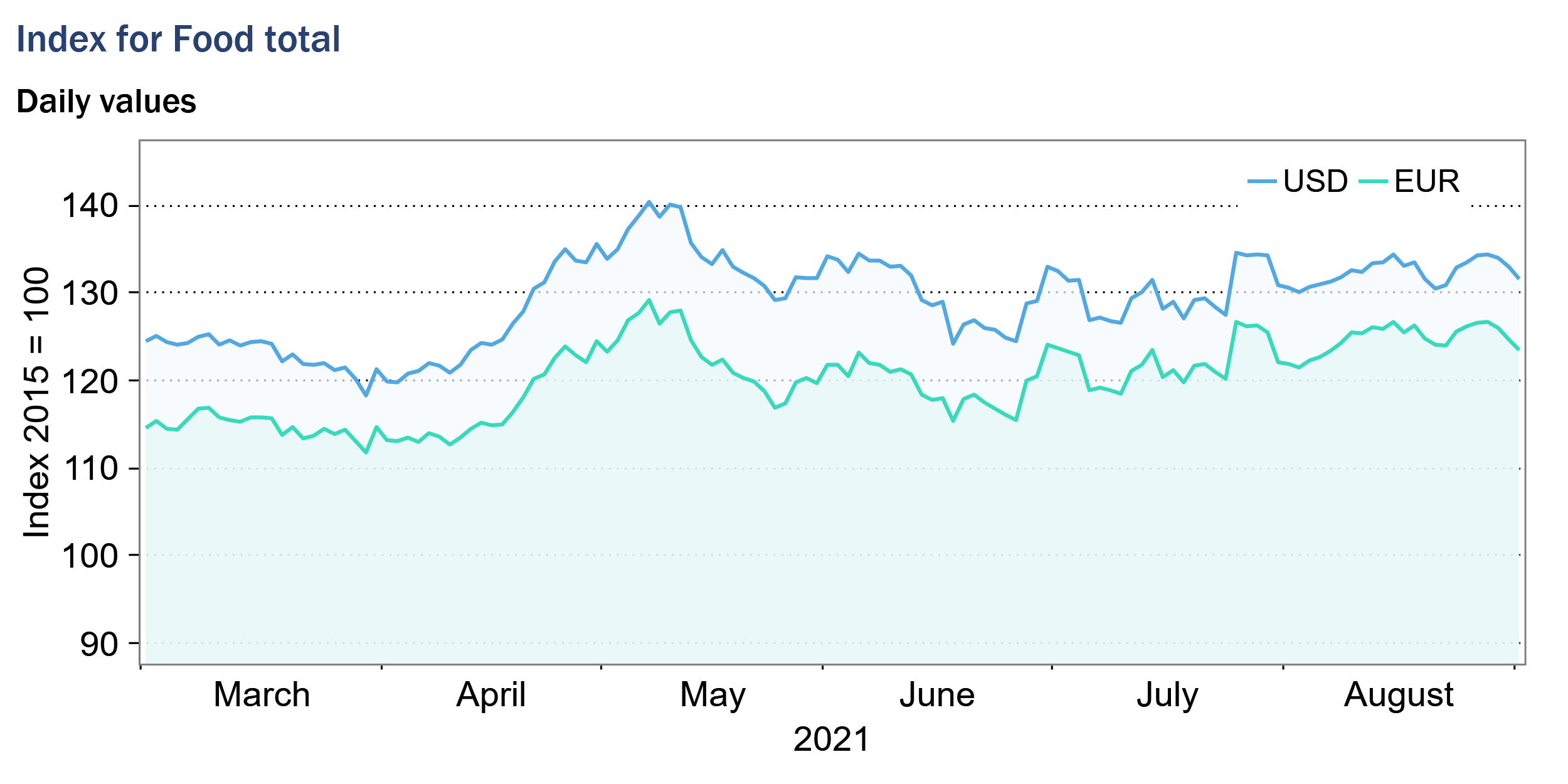 The subindex for iron ore and steel scrap fell by an average of 21.8% in August compared with the previous month. The sharp decline was due in particular to the fall in prices on the markets for iron ore. The reason for the decline is the curtailment of steel production in China for climate protection reasons.

The markets for nonferrous metals saw price increases for the most part in August. In particular, prices for aluminum increased in August compared with the previous month. Increased demand due to global stimulus measures was offset by a decline in supply. In China, some production plants have had to curtail output in recent months due to electricity shortages. In addition, the Chinese government is trying to limit the high-emission production of aluminum in order to reduce the country’s CO2 emissions. The resulting expected supply shortage on the aluminum market led to an increase in prices, which in August were around 50% higher than the average value for the same month a year earlier. By contrast, the price of copper decreased slightly in August. As a frequently used economic barometer, the lower copper price could indicate increased uncertainty due to the advancing delta virus variant.

In August, the index for agricultural industrial raw materials decreased on average compared to the previous month. Wood prices fell by a further 29.5% compared with the July average. After the extreme price increase in May, prices already returned to pre-crisis levels. The world market price for wool was at a historic low in August. The price decline was caused by lower demand due to changes in consumer habits in the fashion industry.

The index for food and beverages rose by an average of 1.8% in August compared with the previous month. The increase was due to developments in the two sub-indices for oils and oilseeds and luxury foods. By contrast, the subindex for cereals moved in the opposite direction, falling on average in August.

Corn prices continued to fall in August despite lower crop yields in Brazil and the USA, due to positive production prospects in Argentina, the EU and Ukraine. World market prices for rice also continued their downward trend in August and remain at historically low levels. By contrast, prices for wheat and barley rose sharply in August compared with the previous month. Increased demand for wheat was met by continued weak supply. European wheat supplies were characterized by quality deficiencies, and North American supplies were weakened by crop failures. Barley prices rose along with wheat prices, as both cereals are important feed grains and are therefore substitutes.

While prices for palm and sunflower oil rose in August, prices on the coconut and soybean oil markets fell. The price of palm oil in particular continued to rise sharply, reaching record levels in August. The price increase was partly due to poor harvest conditions in Malaysia, a major producing country. Lockdown measures imposed due to the Corona pandemic led to a shortage of harvesters as they were not allowed to enter from Indonesia and South Asia. This delayed harvesting, leading to an increase in pest infestation and a significantly lower crop. In addition, there were failures of palm oil mills in Malaysia and Indonesia.

The subindex for luxury foods rose particularly sharply in August compared with the previous month. Thus, strong price increases were recorded on the markets for coffee, cocoa and, in particular, sugar. Prices for coffee and sugar were driven by extreme weather conditions in the South American growing regions. A long period of drought was followed by frost, which significantly impacted the harvest in Brazil, the world’s largest exporter of sugar and coffee.