(Hamburg, April 13, 2021) The HWWI Commodity Price Index rose by an average of 3.2 % in March compared to the previous month. The index thus exceeded its previous year’s value from March 2020, at the beginning of the first global lockdown, by 82 %. All three sub-indices for energy raw materials, industrial raw materials, as well as food and beverages continued to rise on average in March but recorded only moderate growth rates compared to their development in February. The rise in energy commodity prices mainly reflected the development on the crude oil markets. The positive global economic outlook, driven by the vaccination successes in the USA and economic growth in China, could not be dampened by the rising Corona infection figures in Europe. This was also reflected in the rise in prices of some industrial metals, including copper. On the food and beverages markets, a decline in grain prices and a strong price increase for vegetable oils could be observed.

In March, crude oil prices were influenced by various factors on the demand and supply side. In the first week of the month, the OPEC+ countries discussed the joint production policy. Unlike the market’s initial expectations, the OPEC+ agreed to extend the current production cuts by another month. Furthermore, the additional shortage on the part of Saudi Arabia was not lifted as expected but is to be reduced only gradually. The only exceptions were Russia and Kazakhstan, which were able to expand their production to a small extent in March.

Prices were also supported by the continued positive economic development in China and the vaccination successes in the USA. The adoption of economic stimulus packages, especially in the USA, also strengthened hopes for a further recovery of the global economy. In Europe, on the other hand, the slow start of vaccination and the rebounding number of infections caused concerns about another decline in crude oil demand. Especially in the second half of the month, these worries were intensified by the imposition of new lockdown measures in many European countries. 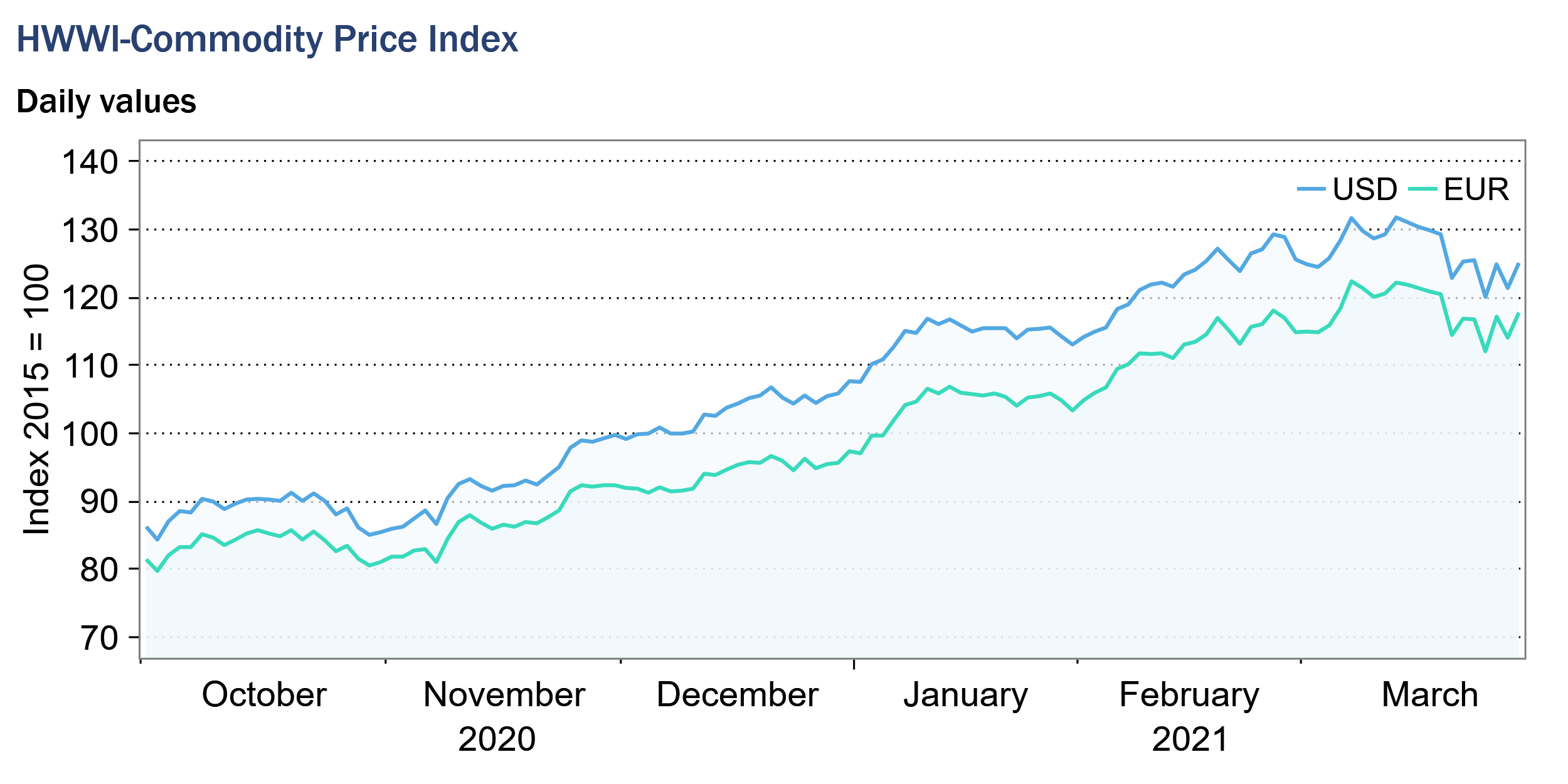 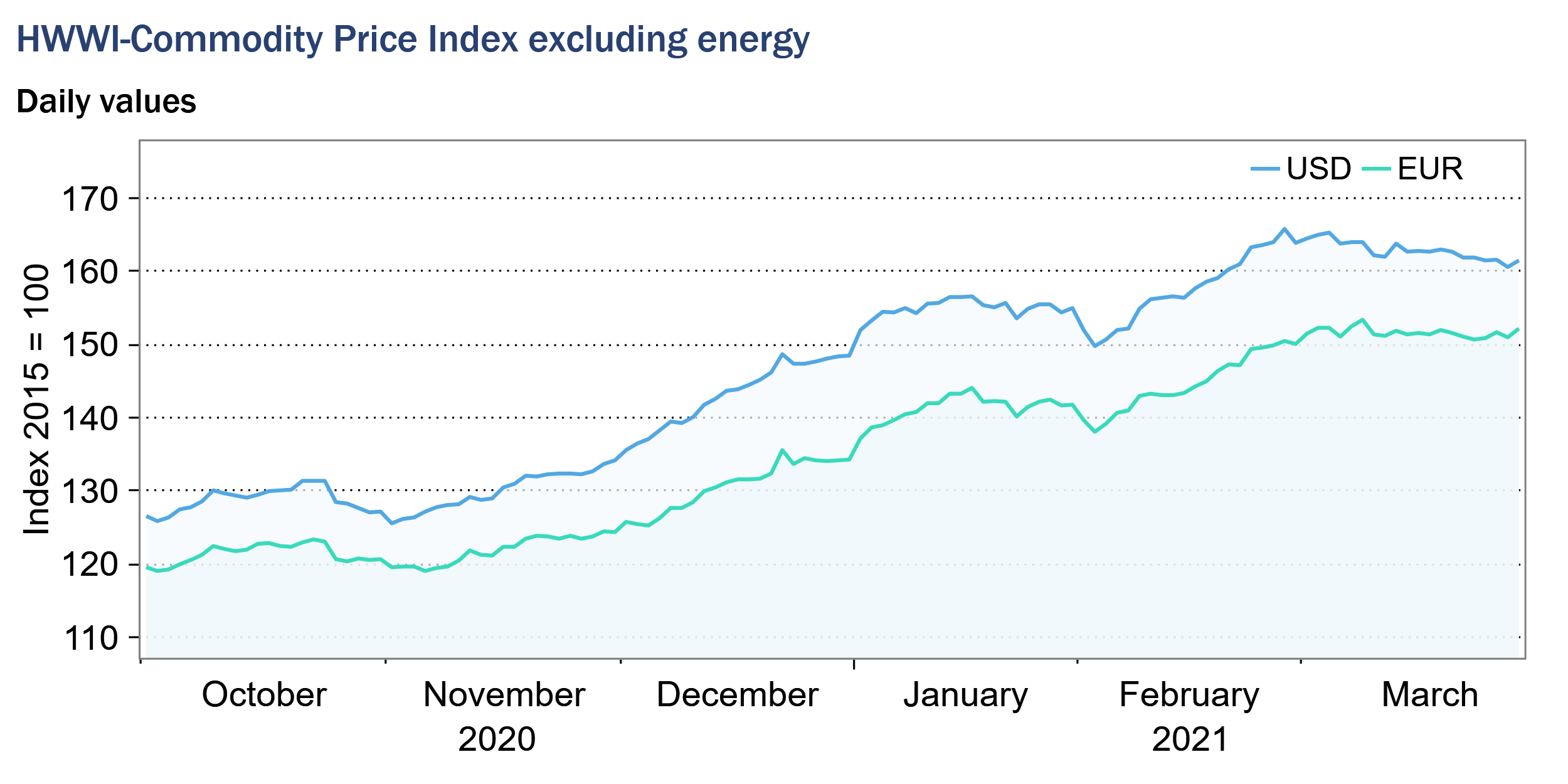 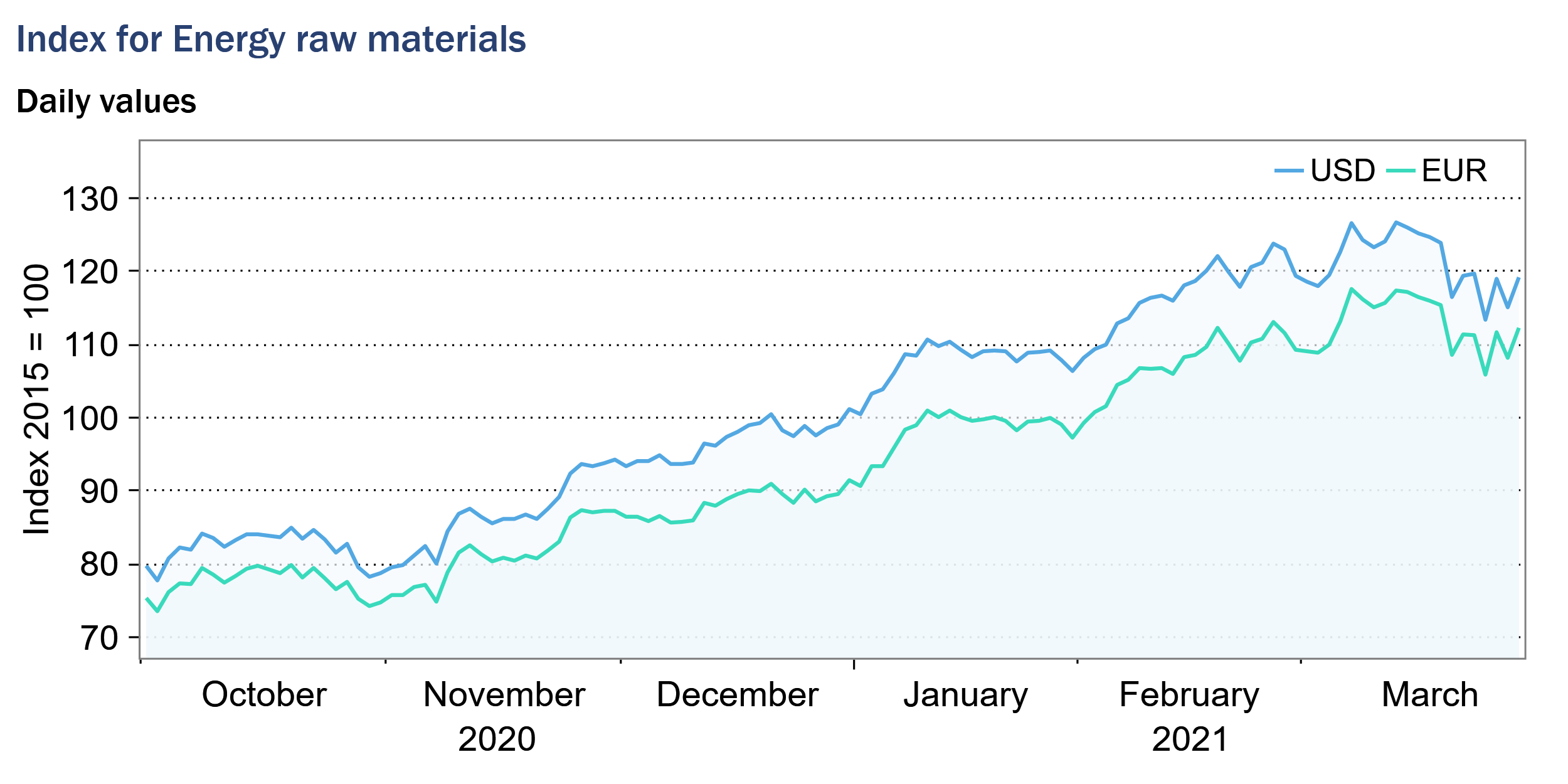 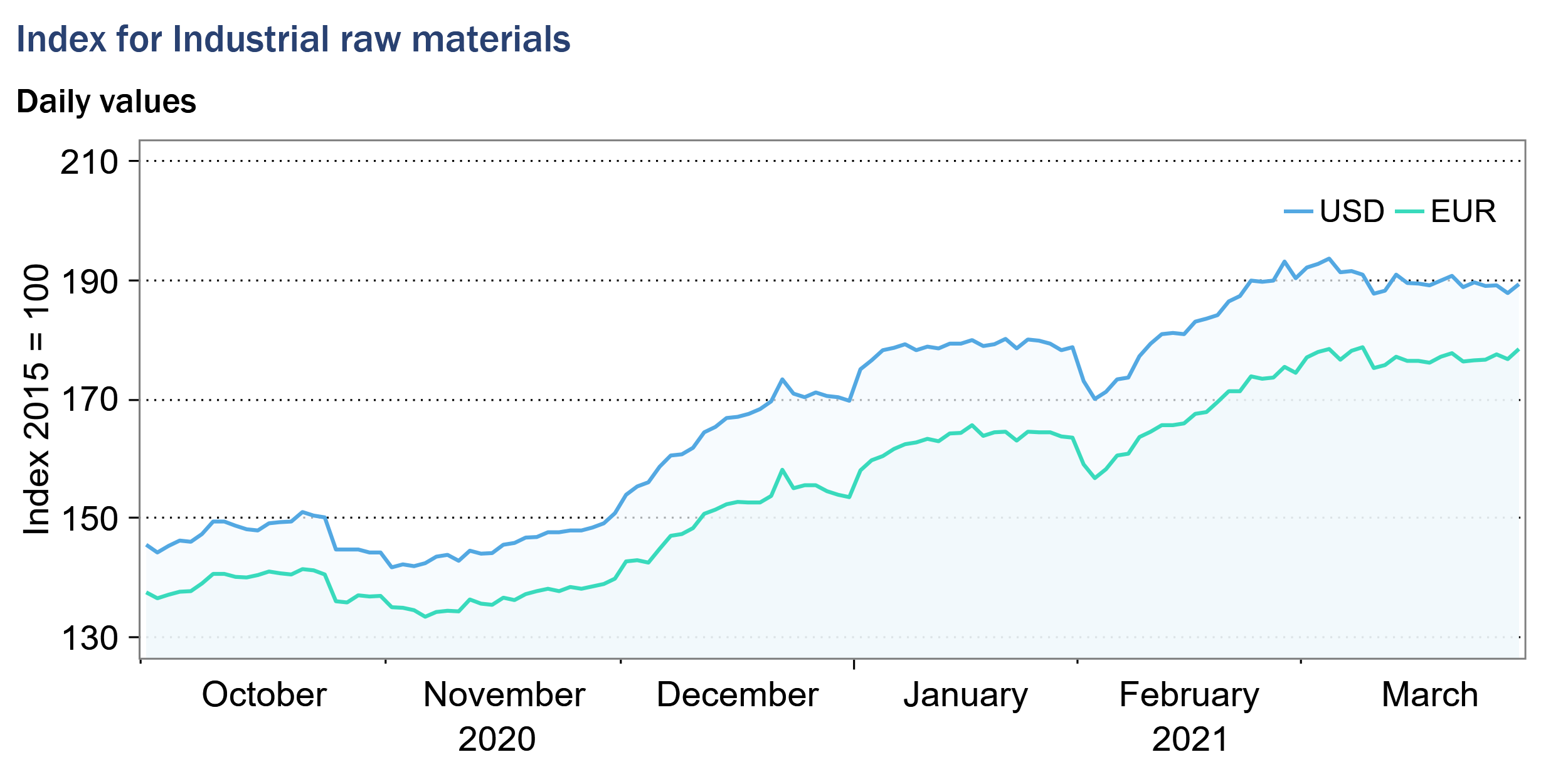 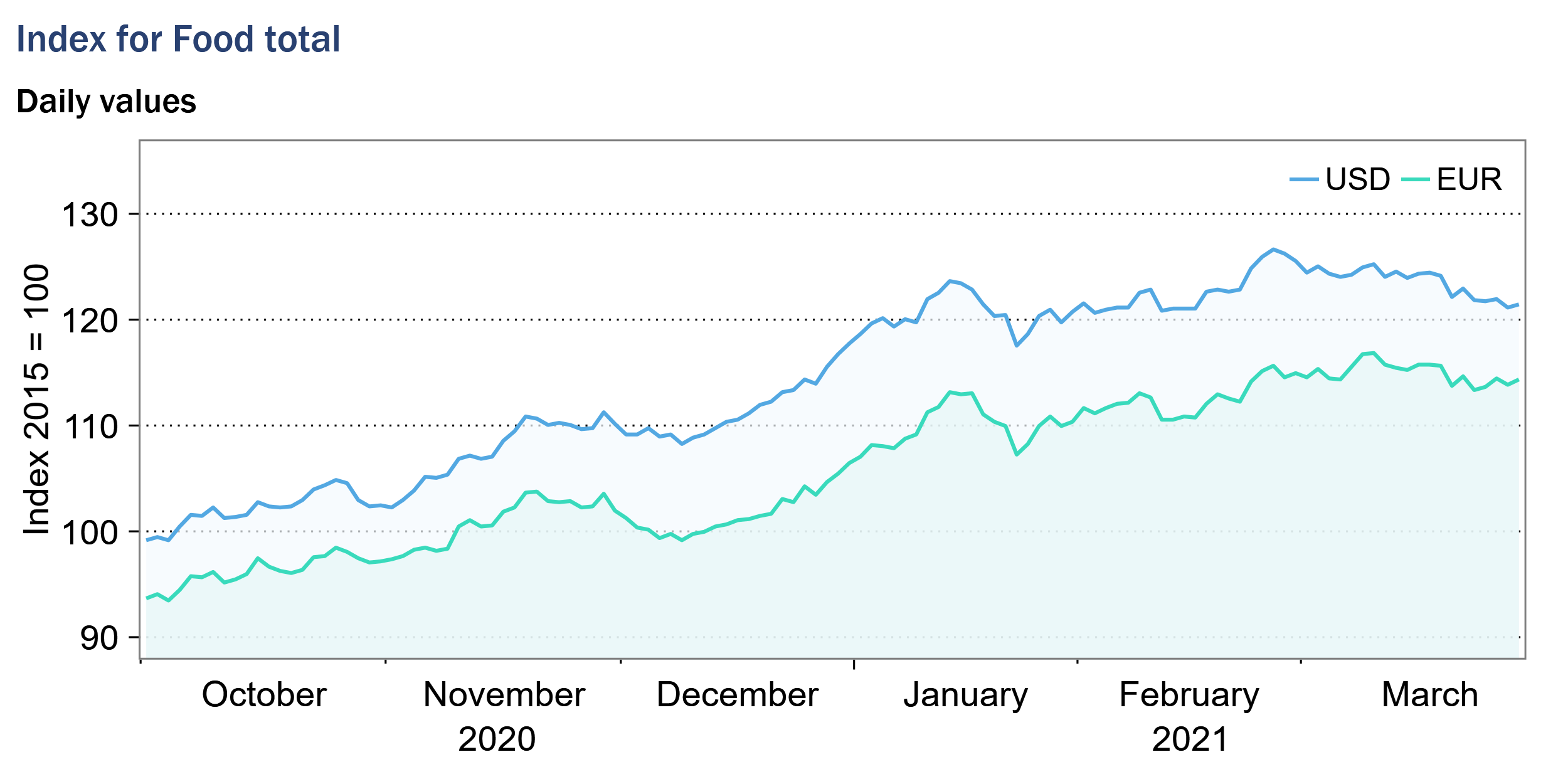 The sub-index for non-ferrous metals rose slightly on average in March, whereby the prices included in the sub-index had opposing developments. While the prices for copper, aluminum and tin continued to rise, the markets for lead and nickel recorded price losses in March. The price of nickel fell particularly sharp compared to the previous month. In addition to its use in stainless steel production, the industrial raw material nickel is also used to produce batteries and is thus an important raw material in the currently strongly growing electromobility sector. Due to the strong increase in demand, nickel prices have risen steadily in recent months. In March, however, the largest nickel producer announced a strong increase in the supply of Indonesian nickel, which caused prices to fall again in March.

Copper prices were subject to fluctuations in March but rose on average compared to the previous month. The continued rise and high level of copper prices indicate positive expectations regarding the development of the global economy. The positive market expectations based on vaccination successes seem to outweigh the concerns due to the rising number of infections, especially in Europe, and indicate a further recovery of the global economy.

Sawn wood prices increased on average in March compared to the previous month, continuously reflecting the increased demand for sawn wood driven by the global lockdown. During the lockdown, there was increased demand for sawn wood from private individuals who were carrying out more renovation projects. By contrast, the markets for agricultural textile raw materials such as wool, cotton and hides recorded price declines in March.

The index for food and beverages remained almost unchanged on average in March, rising by only 0.6 % compared to the previous month. While the sub-indices for grains and luxury food fell slightly on average, prices for oilseeds and oils rose on average in March compared to the previous month. Wheat prices, which had risen strongly in recent months, recorded average price losses in March. The price decline is due to Russia’s announcement to reduce or lift the export duties previously imposed. In addition, the renewed outbreak of swine flu in China led to a drop in demand for feed grain, which led to a decline in corn and soybeans prices. On the last day of the month, however, strong price increases were recorded on the wheat and corn markets, triggered by the publication of the USDA report, which indicated far lower than expected acreages and partially significantly reduced stocks.

On the vegetable oil markets price increases were recorded in March. In particular, the price of sunflower oil rose sharply compared to the previous month, but also the prices of soybean, coconut and palm oil showed significant increases on average in March. These price developments are due to a continued shortage of supply coupled with rising demand. Stocks of vegetable oil remain low as the labor shortage on plantations caused by the pandemic significantly affected the harvest. In addition, unfavorable weather conditions in the producing countries have reduced crop yields. By contrast, the global economic outlook is improving due to the progress of global vaccinations, which in turn raises expectations of increased future demand for vegetable oils for biofuel production. The “Clean Energy Revolution” in the USA, supported by US President Biden, also points to a future increase in global consumption of vegetable oils, which is already reflected in prices.

The prices contained in the index for beverages moved in opposite directions in March. While cocoa and coffee prices rose slightly, tea and sugar prices fell. The decline in sugar prices reflects an increase in sugar supply. The strong dollar against the weak Brazilian real prompted Brazil, the largest sugar producer, to increase its export supply of sugar traded in US dollars.