(Hamburg, February 17, 2021) In January, most prices on the international commodity markets increased. The HWWI commodity price index rose by an average of 10.6% month-on-month, exceeding the average value of January 2020 by 2%. Global vaccinations continued to raise hopes for a recovery in the global economy in January, driving up prices in energy and industrial commodity markets. Crude oil prices were also supported by production cuts by OPEC+ countries. Developments on the markets for grains and industrial metals were dominated in particular by the strong increase in demand from China.

The rise in crude oil prices included in the index continued in January. Prices rose by an average of 10% compared to the previous month. At the end of the month, prices for Brent, the European benchmark, were quoted at $56 per barrel and prices for WTI, the U.S. benchmark, at $52 per barrel. However, these prices are still below their pre-crisis level. For example, just before the global spread of the Corona virus in January 2020, crude oil prices were still 12.5% higher on average.

Crude oil prices in January continued to be driven by hopes that the Corona pandemic can be gradually overcome through global vaccination. The lifting of the lockdown measures imposed worldwide would boost the global economy and lead to an increase in crude oil demand. Furthermore, the announcement by the U.S. government of a planned $1.9 trillion stimulus program strengthens expectations that demand for crude oil will recover in the future.
In addition, the oil price is also being supported by the supply side. On the one hand, the OPEC+ countries continue to stabilize the price of crude oil by restricting their oil production. On the other hand, the ongoing political conflict between the USA and Iran is driving up prices. As the USA intend to maintain sanctions against Iran, no increase in Iranian export supply is expected for the time being.

Coal prices also recorded an increase in January compared with the previous month. Demand for coal continued to rise in January, particularly from China, the largest, and India, the second largest global coal consumer. In China, the severe cold snap also caused increased coal consumption in January. The conflict between China and Australia is still influencing developments on the coal markets. Due to the import ban on Australian coal imposed by China, China had to substitute Australian coal imports with coal from other countries. Due to mine closures caused by strict lockdown measures in producing countries, overall global coal supply was tight in January, which combined with increased demand led to rising prices.
When examining the natural gas markets, the huge increases in the price of European natural gas are particularly striking. The price of European natural gas increased by an average of 33.7% in January compared to the previous month and was over 100% higher than in January 2020. In Europe, the onset of winter with colder than expected temperatures has led to an increase in natural gas consumption. In addition, many Europeans continue to work from home due to the ongoing curfews, which led to an additional increase in daily natural gas consumption for heating in the cool temperatures. 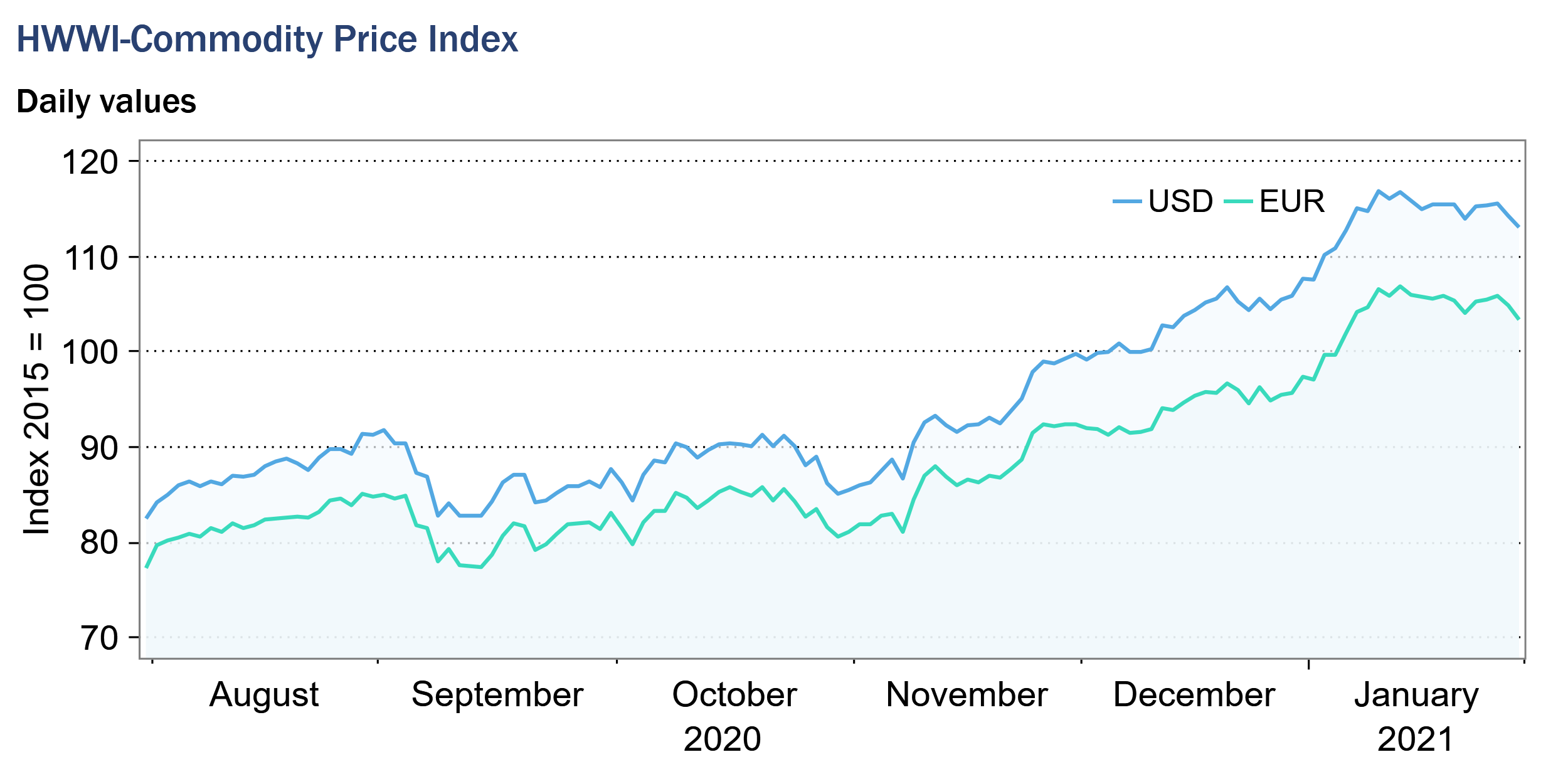 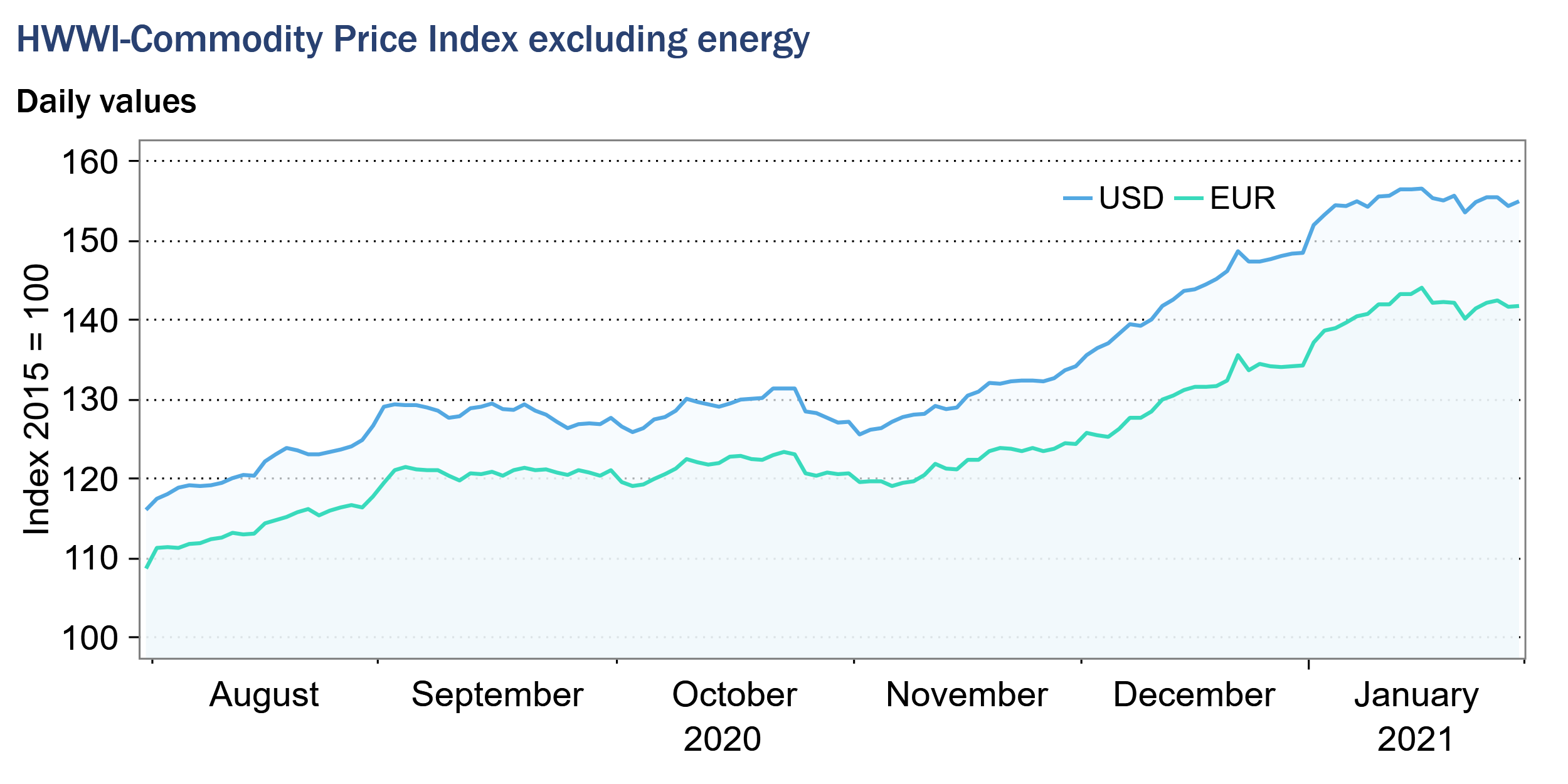 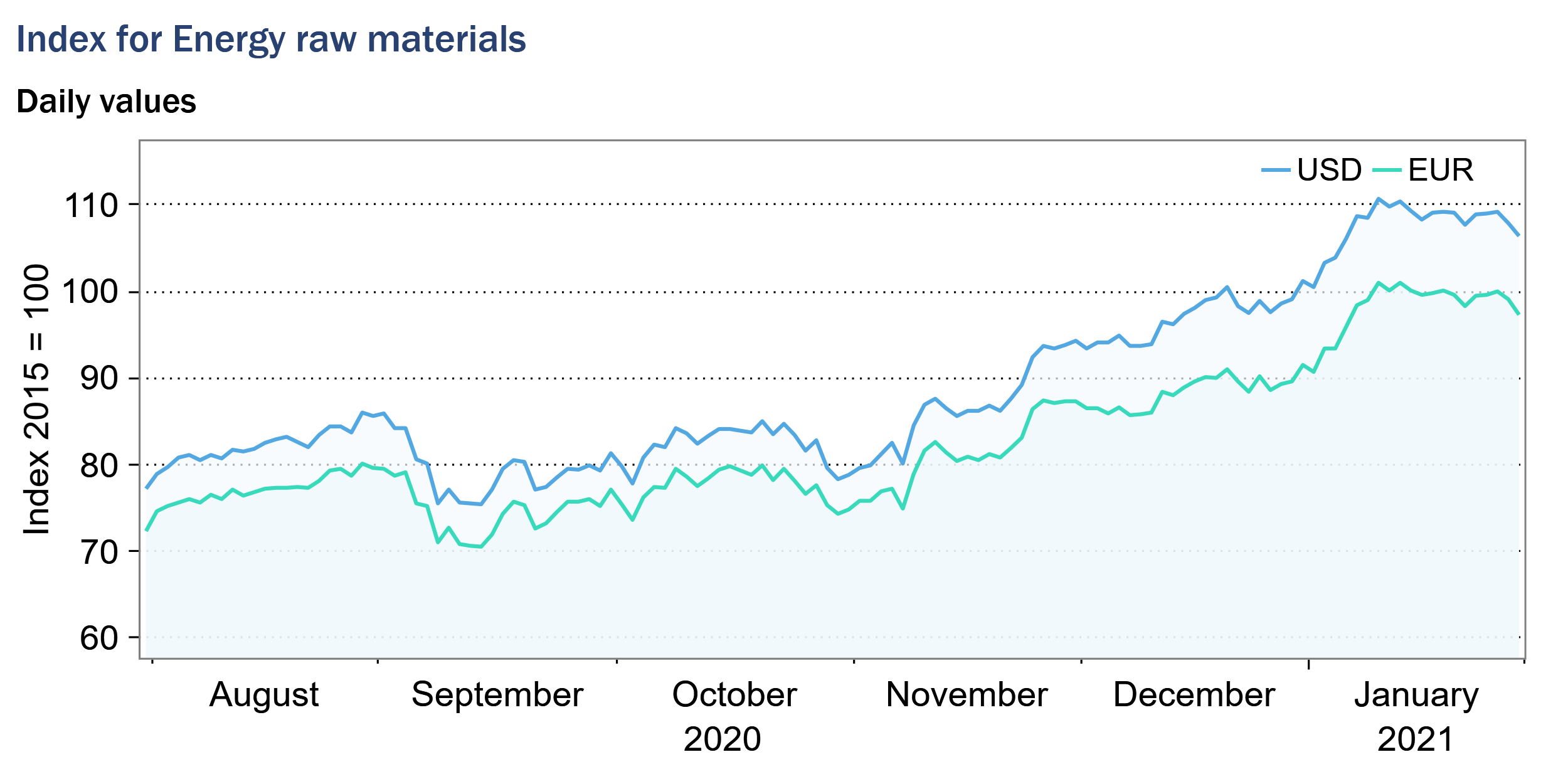 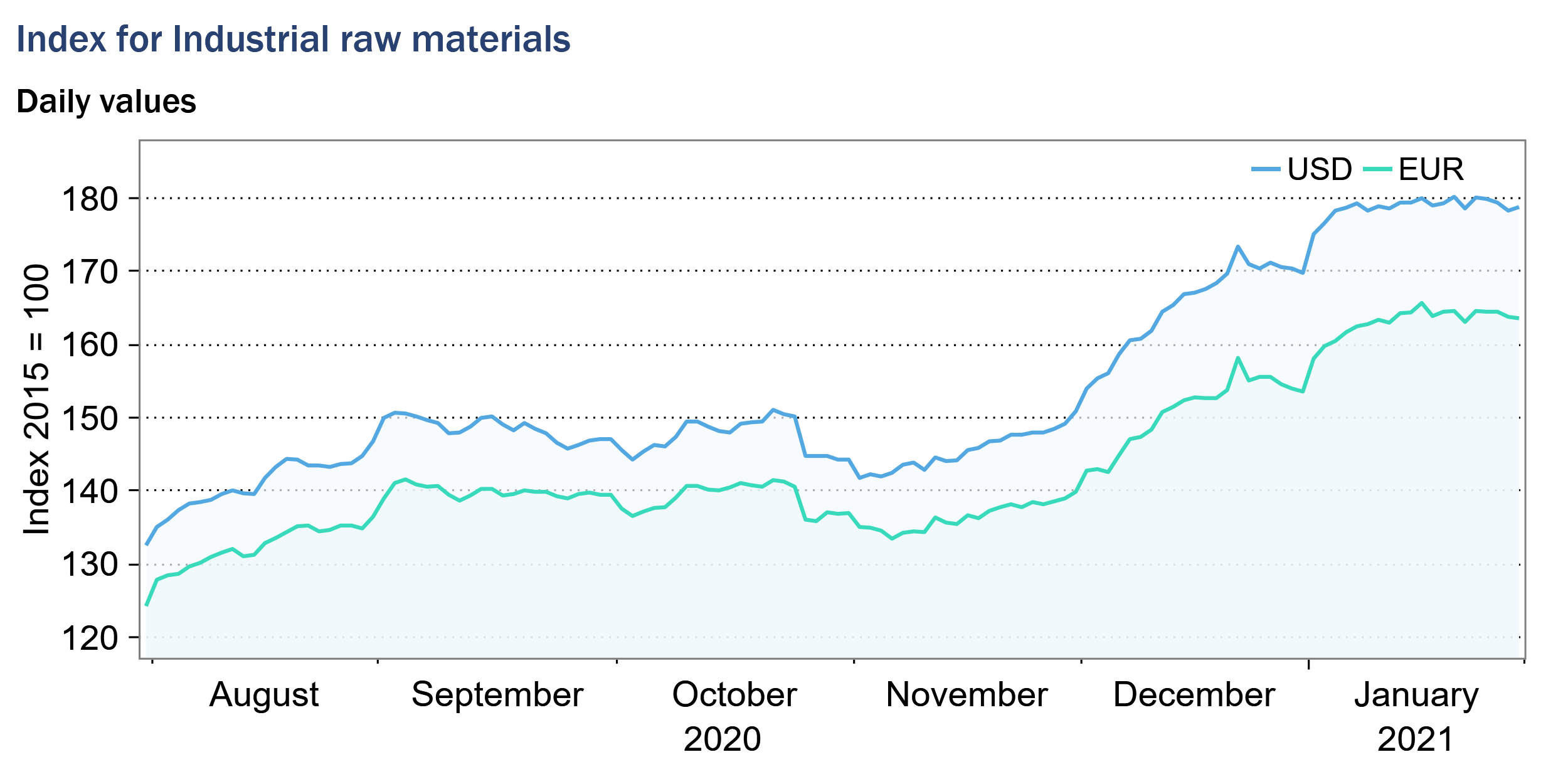 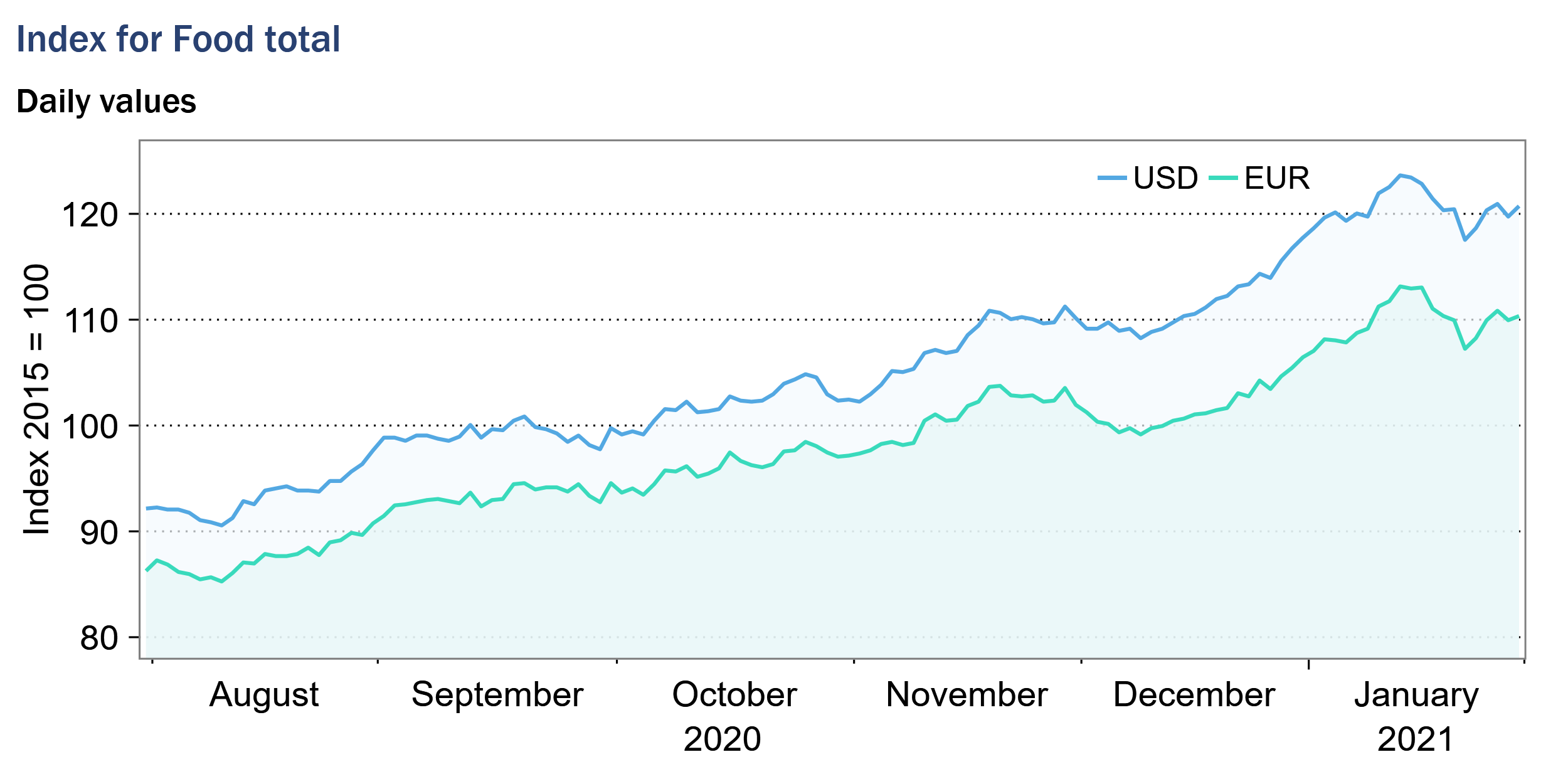 Prices for iron ore and steel scrap showed the sharpest increase in January. The sub-index for iron ore and steel scrap recorded a month-on-month increase of 13.5%. Year-on-year, the index increased by 76.8% compared with the average value for the corresponding month of the previous year. The increase continued to reflect growing Chinese steel production and additionally increased demand from Japan, South Korea and Western Europe.

Prices for nonferrous metals also increased in January, albeit to a slightly lower extent than in December. Here, as well, the price increase continues to be due to China’s rapid economic recovery, which is accompanied by a major increase in demand for industrial metals. However, an industrial recovery can also be observed in the other industrialized countries, which is driving commodity prices. Prices for tin, copper and nickel were on average around 30% higher in January than in the same period in 2020. The start of global vaccinations and the economic stimulus packages launched by many countries to combat the economic consequences of the pandemic are expected to boost the economy and thus increase demand for industrial raw materials. As the focus of the stimulus packages is often on promoting climate-friendly technologies, this will particularly increase demand for certain metals, such as copper. Copper has good electricity and thermal conductivity and is therefore used in particular in electrical engineering.

Cotton prices also rose considerably in January. Poor crop yields met with robust demand, particularly from China. Cotton prices recovered from a sharp decline in the wake of the first global lockdown in the spring and were above pre-crisis levels in January.

Prices on the corn, wheat and soybean markets rose significantly as a result of lower supply from the USA, South America and Ukraine coupled with increased demand from China. In Argentina and Brazil in particular, the La Niña climate phenomenon, which caused severe drought, affected soybean and wheat harvests. In addition, the export tax on wheat announced by Russia drove up wheat prices.

The vegetable oil markets also saw further price hikes in January, particularly for soybean, palm and sunflower oil. The increases were due to unexpectedly low crop yields. For example, palm oil harvests in Indonesia and Malaysia were impacted by heavy rainfall. In addition, the price increases pointed to the late effects of the lockdown measures in the producing countries, which led to labour shortages and supply difficulties for plant fertilizers and continue to have a negative impact on crop yields.