(Hamburg, November 17, 2020) The development on the international commodity markets was significantly influenced by the increasing corona infections in the U.S. and Europe, especially in the second half of October. The announcement of further lock-down measures in many European countries led to falling prices on the crude oil markets in the second half of the month. The second wave of the corona pandemic in Europe and the U.S. worsened the outlook for the global economy, but had only a minor impact on prices for industrial raw materials in October. Due to the continuing increase in demand from China, prices, particularly for base metals, remained at a high level. Significant price increases could be observed on the markets for food and beverages in October. Overall, the HWWI commodity price index recorded a slight average increase in October compared to the previous month.

After crude oil prices initially rose slightly at the beginning of October, the prices of all three types of crude oil included in the index fell in the second half of the month. At the end of the month, prices were only just over 37 US-Dollar per barrel for the European reference grade Brent and 35 US-Dollar per barrel for the American reference grade WTI. The renewed sharp rise in corona infections in the U.S. and also in Europe and the announcement of further lockdown measures in many European countries clouded the outlook for the global economy and led to expectations of a further decline in demand for crude oil.

In addition, an expansion of supply in October put pressure on crude oil prices. On the one hand, the North African country Libya, which has been in civil war for years, announced that it would again significantly increase its own production volume. Oil production in Libya has been blocked by rebels for several months and has been under the control of the state oil company (NOC) again since October. On the other hand, Iraq again exceeded the production cuts agreed by OPEC+ in October and produced above the agreed limit.

A new meeting of the OPEC+ states including Russia is planned for the end of November to discuss an extension of the supply cuts. Given the continued weak demand and the expansion of crude oil production from non-OPEC countries, a mere extension of the easing may not be sufficient. It remains to be seen whether Saudi Arabia will be able to push through an additional cut in production volume within OPEC+. 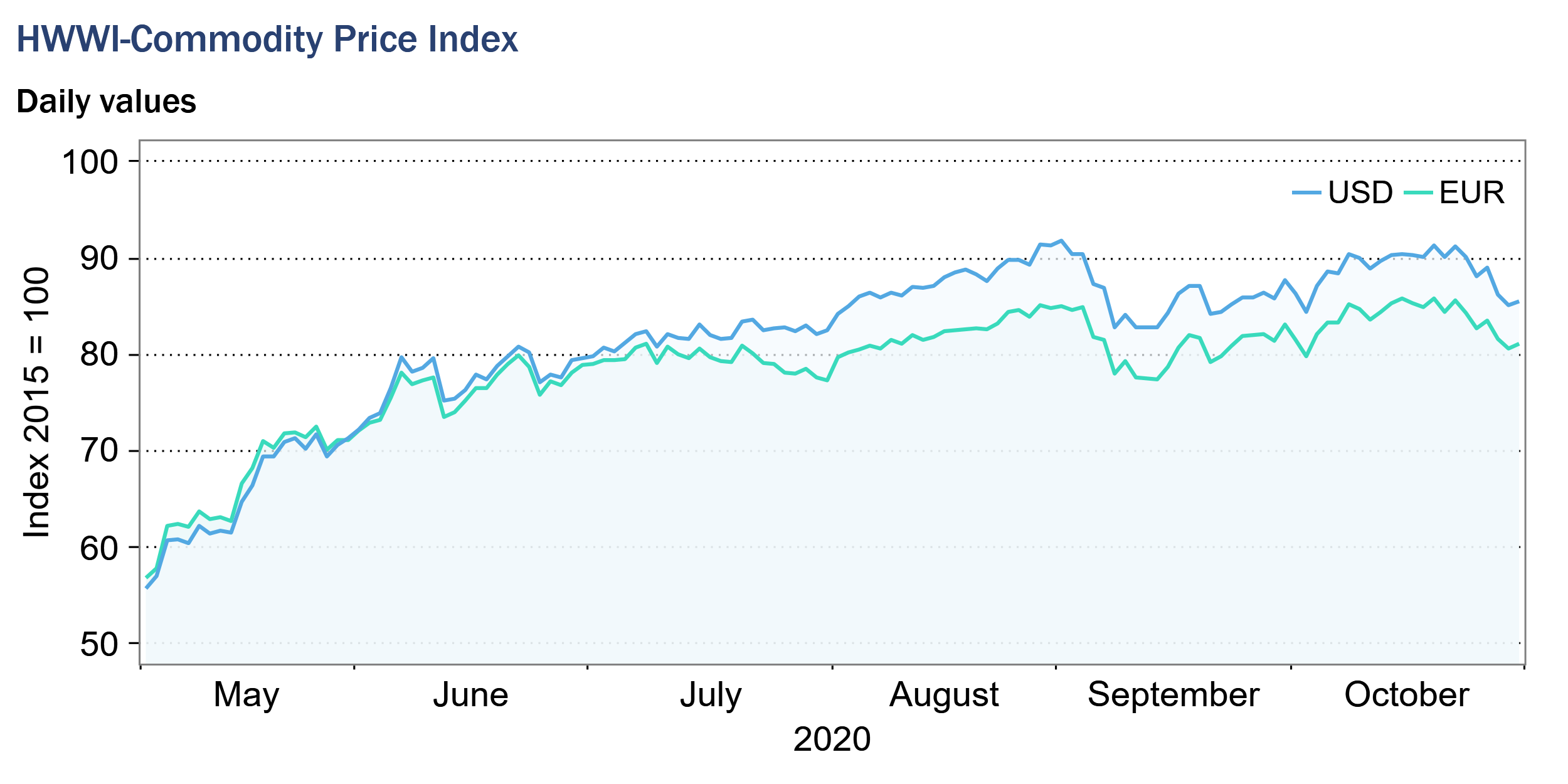 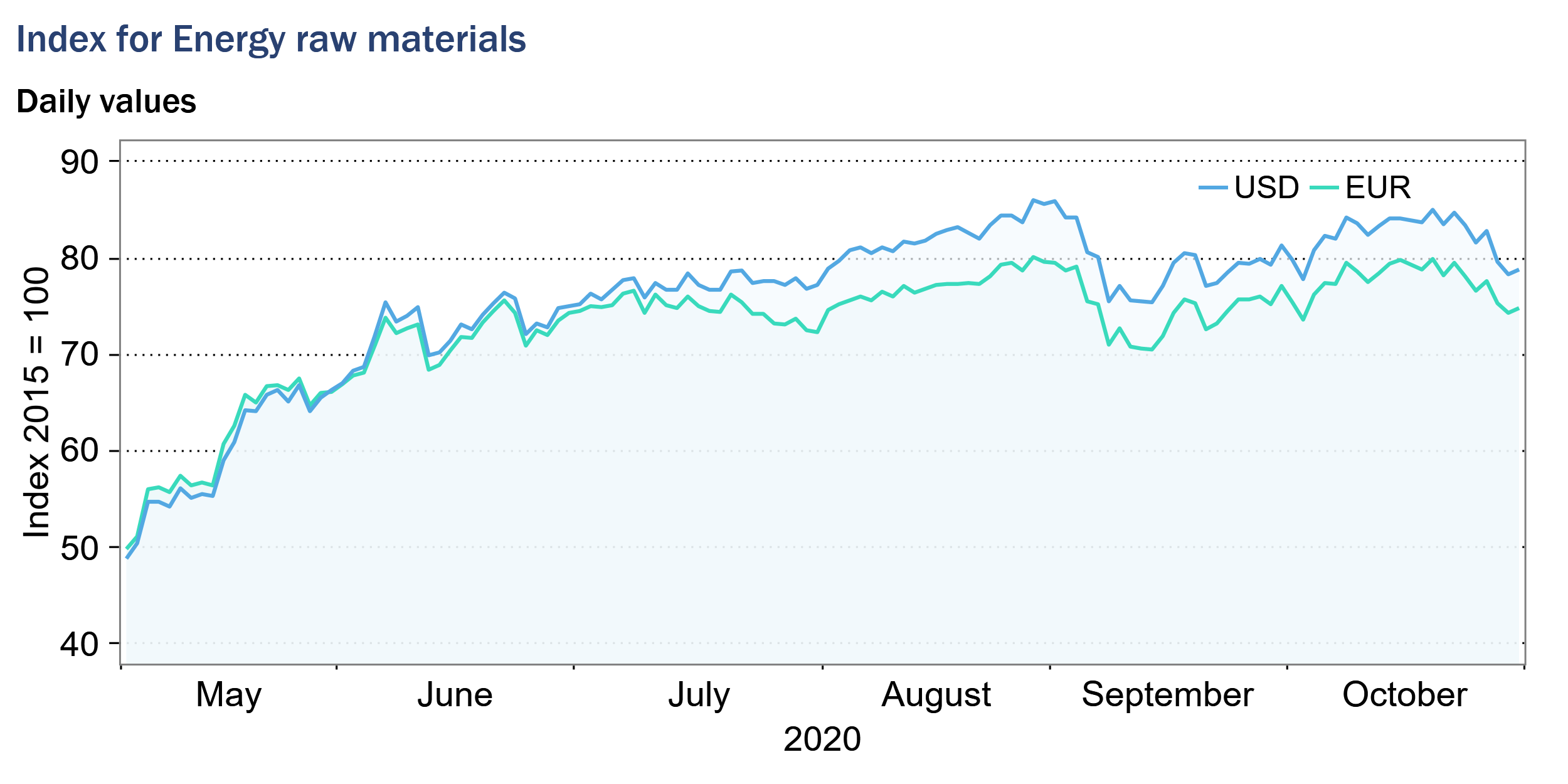 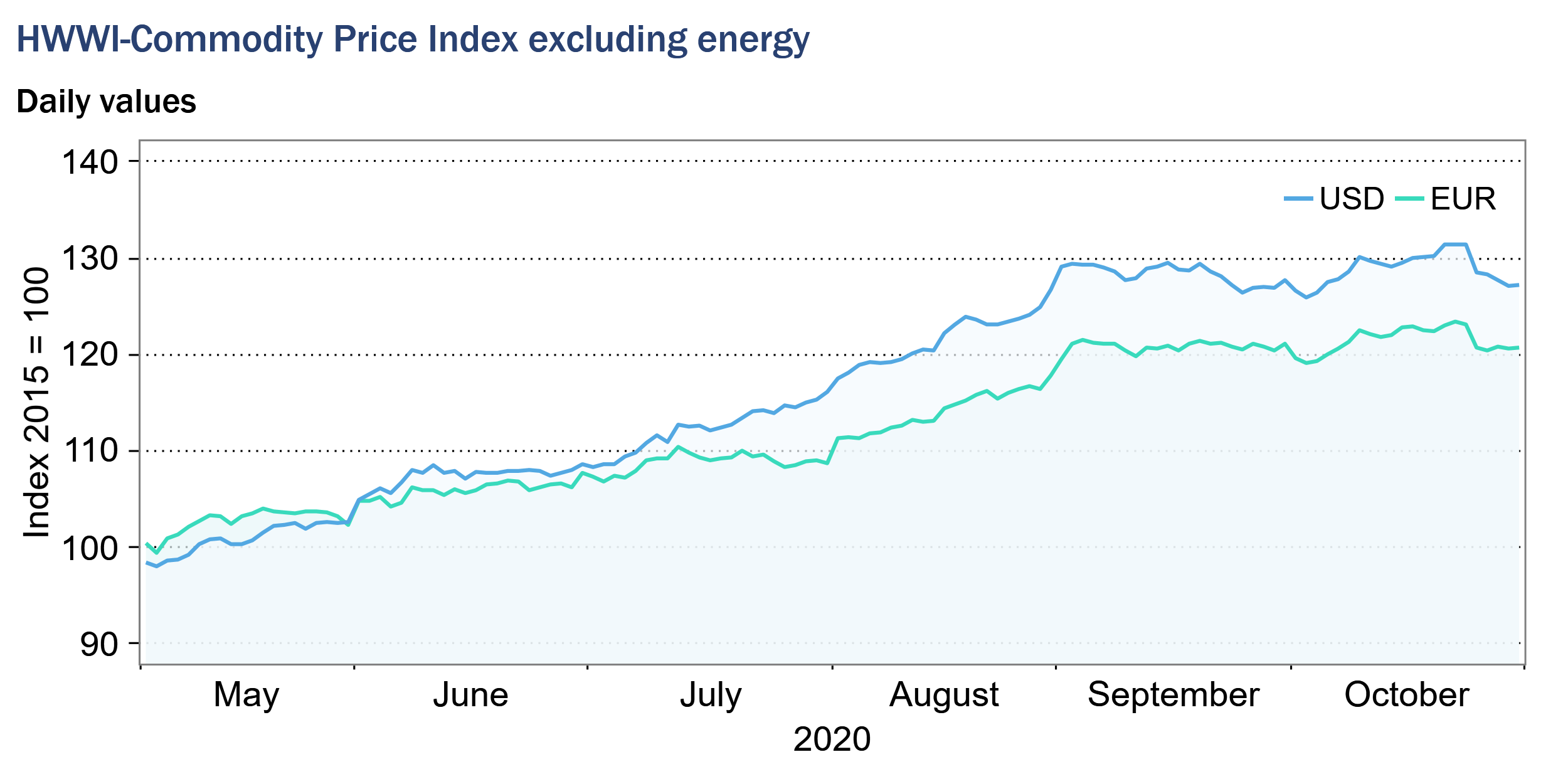 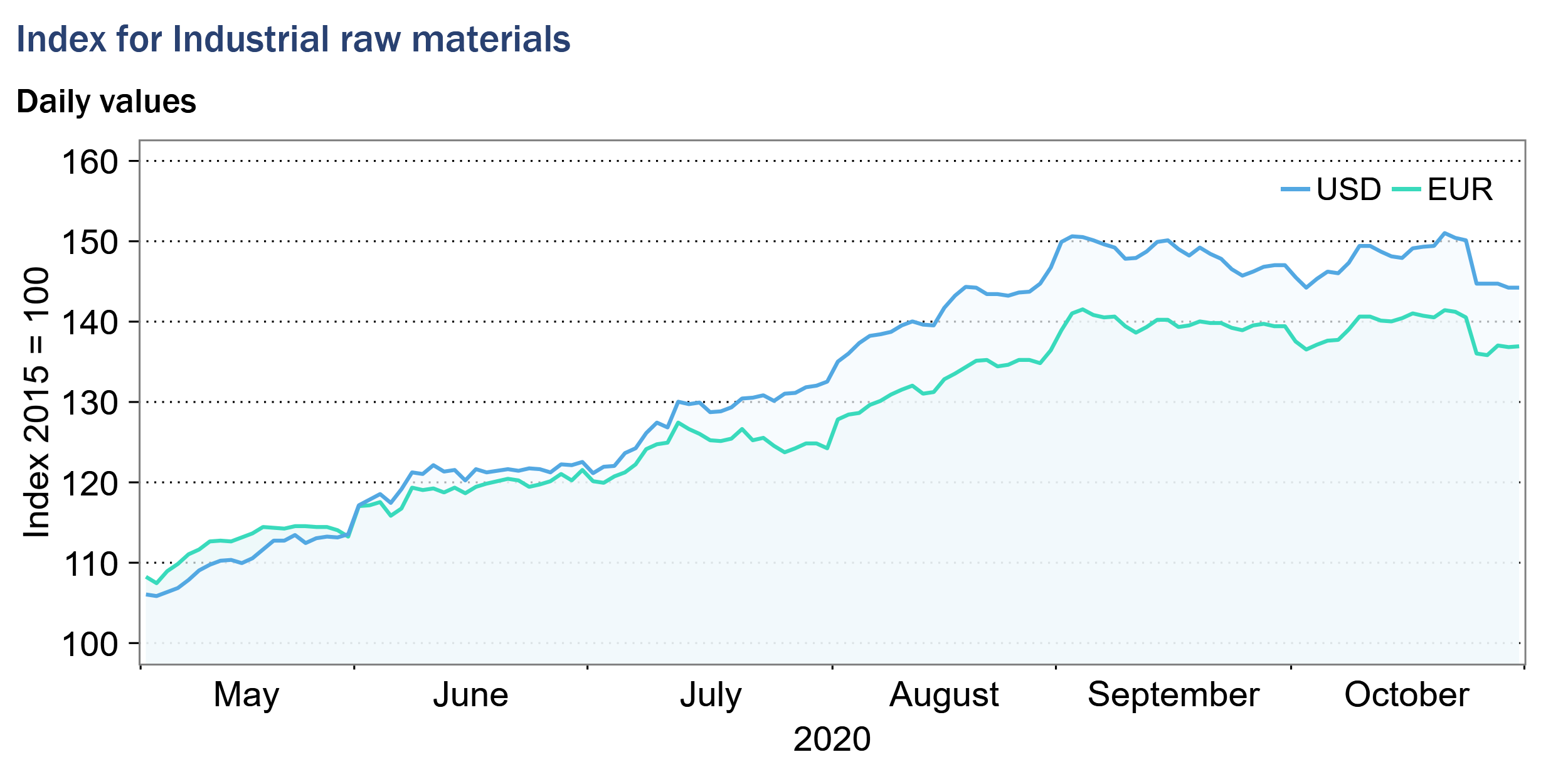 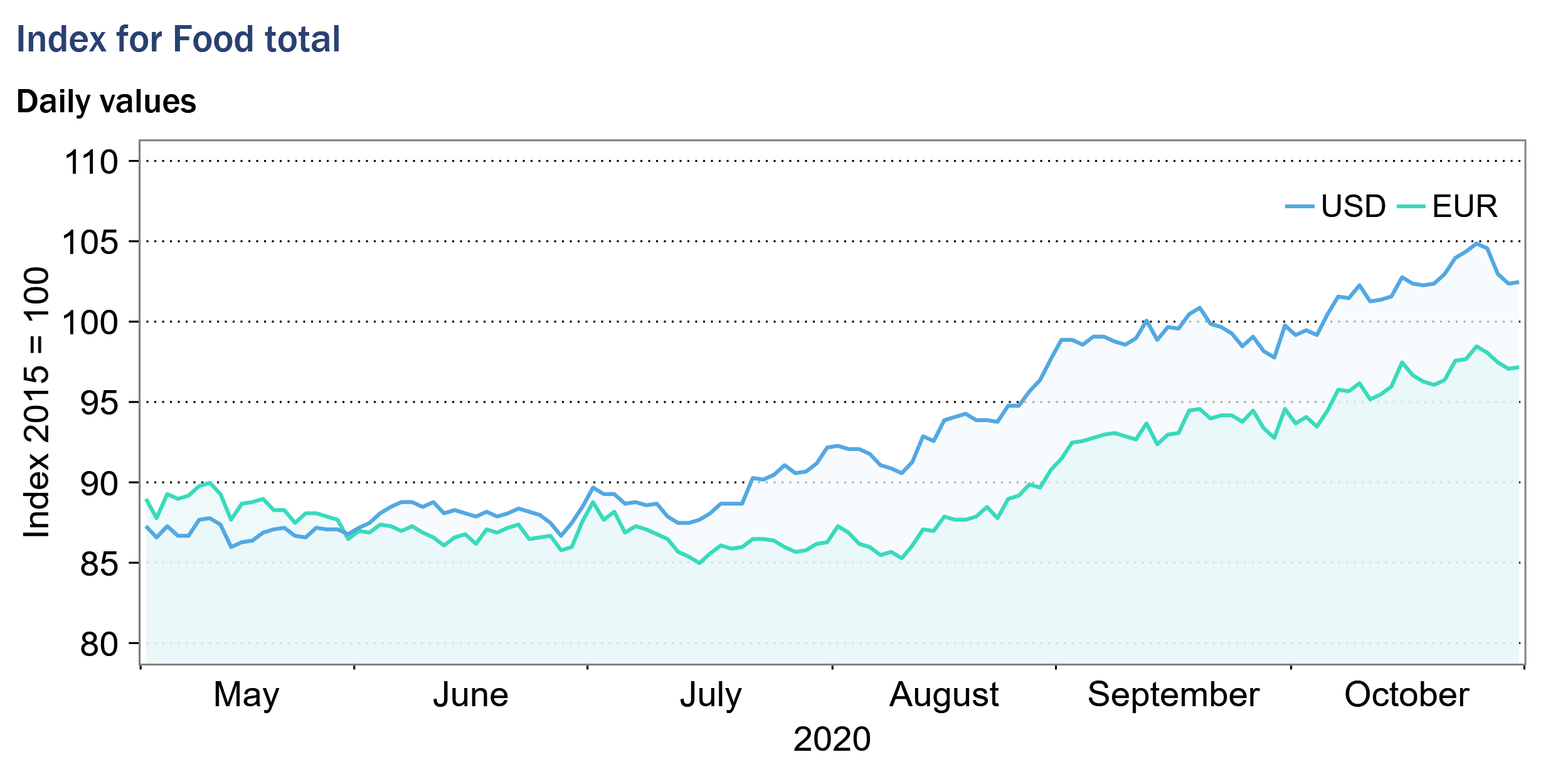 The upward trend in the prices of industrial metals caused by rising demand from China slowed down in October or was interrupted for some industrial metals. While the Chinese economy continued to recover, the sharp rise in the number of infections in Europe and the U.S. increased the uncertainty on the markets and depressed the prices of base metals. Especially in the second half of the month, when renewed lock-down measures were announced in many European countries, the growth of base metal prices slowed down or the markets even recorded slight price losses.

Thus, copper prices, driven by demand from China, recorded increases in the first half of the month, but fell slightly in the second half of October. Nevertheless, copper prices remained at a high level, averaging 16.6 % above the average price in October 2019.

Australian wool prices recovered after the price low in September and also benefited from rising demand from China. However, after an increase of over 16 % compared with the previous month, average October prices are still 24.6 % lower than the corresponding value for the prior-year month.

In October, prices for food and beverages continued to rise, mainly due to the sharp price increases on the grain markets. In particular, prices for wheat and barley increased significantly in October, rising by an average of over 12 % compared to the previous month. Compared to the previous year, the average price of barley in October was 17 % higher than in October last year, and the price of wheat was even 30 % higher.

As the corona crisis worsened, global export demand for wheat increased in October. At the same time, supply declined due to poor growing conditions in Argentina and the continuing drought in other important harvesting areas. Corn prices also rose, reflecting the strong increase in demand from China.

The markets for luxury food and beverages showed opposing trends in October. While sugar prices increased, coffee and cocoa prices decreased on average compared to September. The price increase on the sugar markets reflected in particular the prospects for lower sugar production due to below average rainfall in Brazil and India. India and Brazil are the two largest sugar producers in the world. Sugar production in Thailand has also declined this year due to persistent drought, which further supports the sugar price.