(Hamburg, December 17, 2020) The HWWI commodity price index rose by an average of 4.7 % in November compared with the previous month and is 18 % lower than the corresponding monthly value for the previous year. In November, prices on the international commodity markets were again influenced by the ongoing corona pandemic. In Europe in particular, infection numbers rose and again led to the introduction of strict lockdown measures in many European countries. However, news of a breakthrough in vaccine development in early November raised hopes that the pandemic would be overcome, and that the global economy would therefore recover. The positive outlook had a particular impact on the crude oil markets in November, driving up crude oil prices. The ongoing positive development of the Chinese economy continued to strengthen demand on the markets for industrial metals and food, causing prices to rise in November. Almost all commodities from the various market segments rose on average in November compared with the previous month.

The prices of the crude oil grades included in the index rose steadily in November. At the end of the month, the price of Brent, the European reference grade, was quoted at just under $50 per barrel, while the price of WTI, the U.S. reference grade, exceeded $46 per barrel. The rising price trend on the crude oil markets was driven in particular by the recently announced breakthrough in vaccine research. The prospect of an effective corona vaccine strengthened hopes that the pandemic would soon be overcome and that the global economy would therefore recover.

On the supply side, the decline in oil reserves in the U.S. supported oil prices, and market expectations regarding the OPEC+ countries’ negotiations on future production policy, which took place at the end of November, also had a price-stabilizing effect. The OPEC+ countries, including Russia, only reached agreement in the first week of December after several days of negotiations. In order to further stabilize oil prices, the OPEC+ countries plan to increase their oil production by 500,000 barrels per day from January 2021, instead of the previously agreed rate of around two million barrels per day. Due to the current corona-related uncertainty in the market, OPEC+ also announced that it will review its policy once a month in the new year in order to be able to react flexibly to price developments. 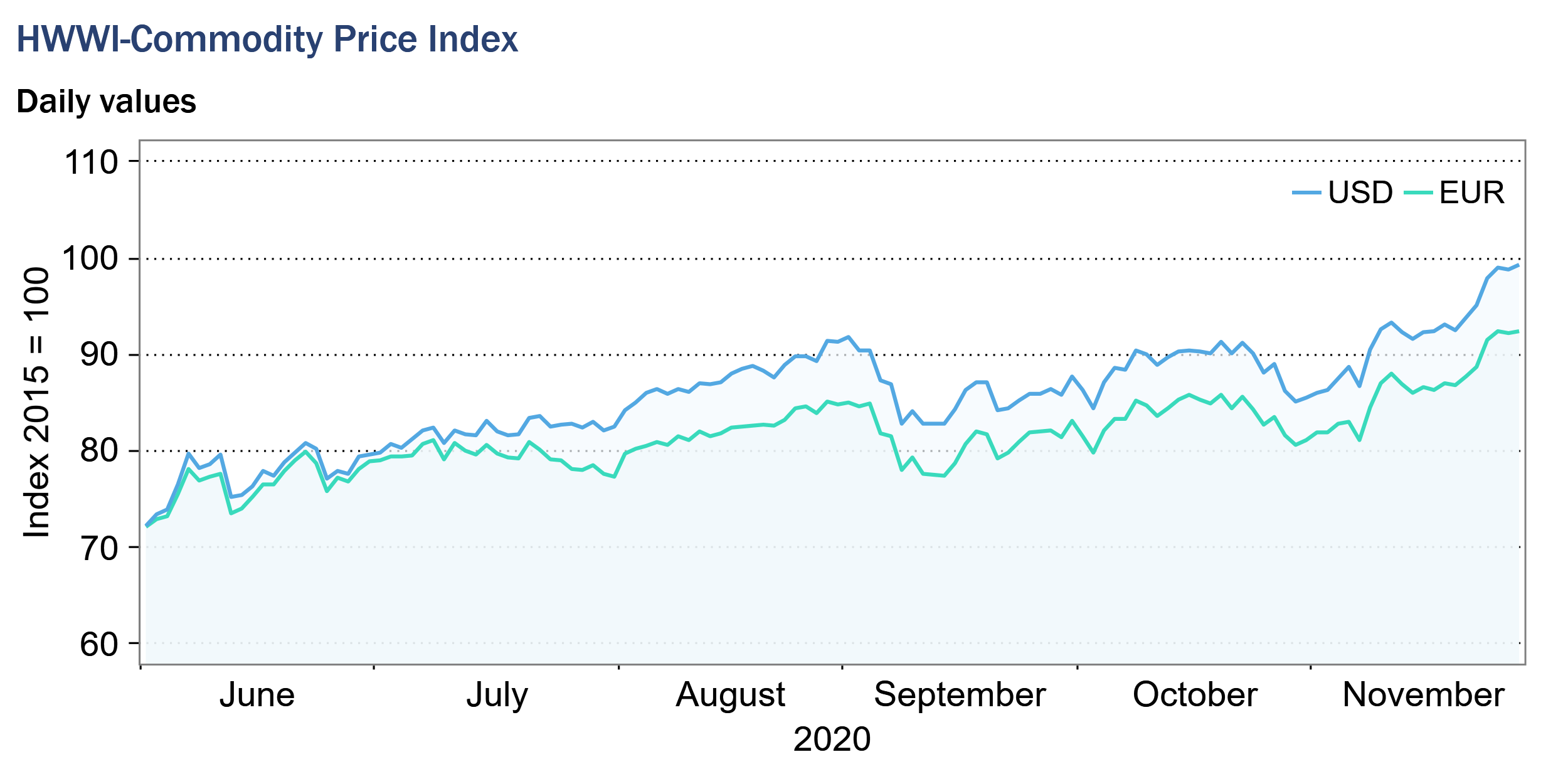 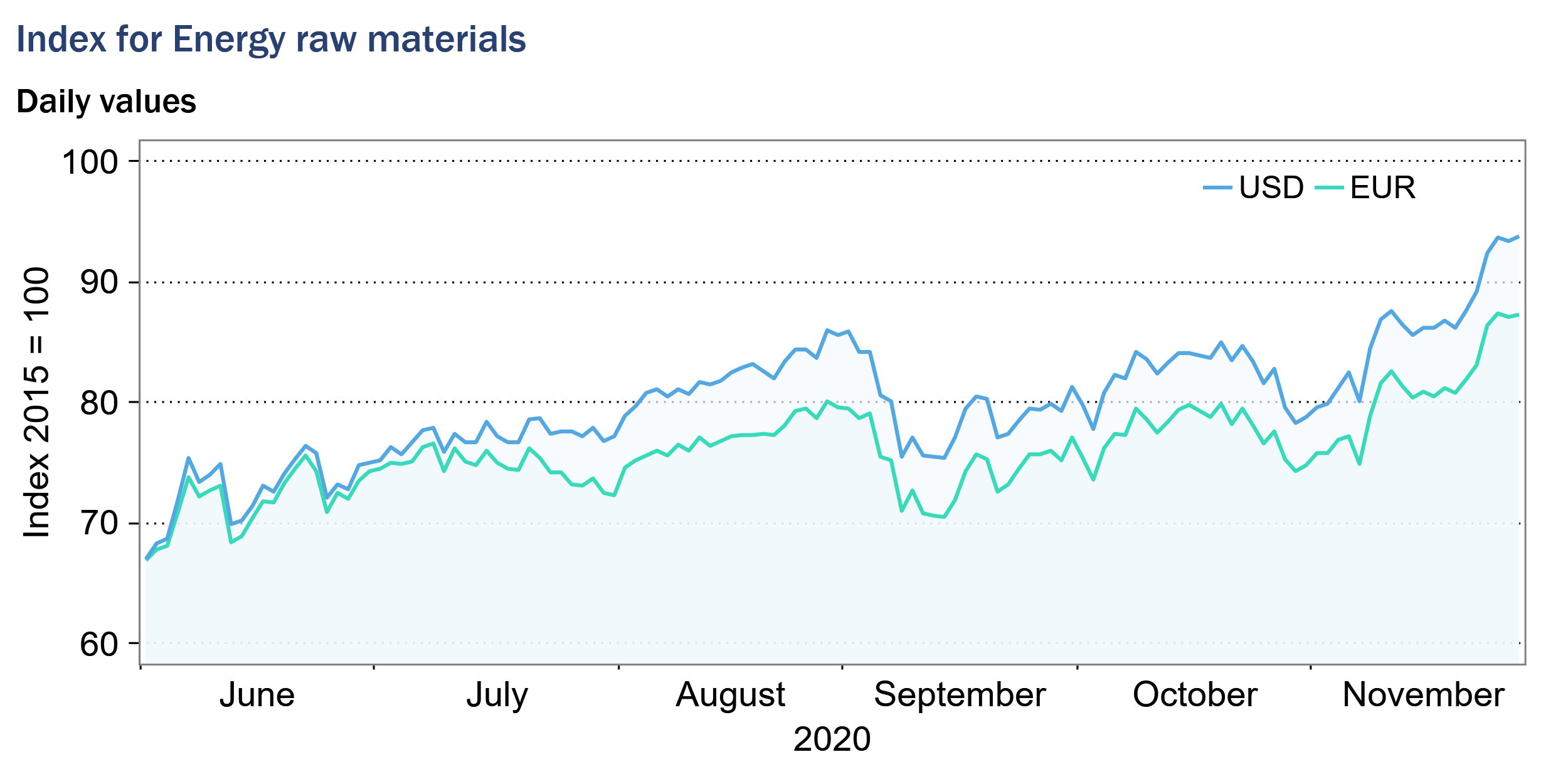 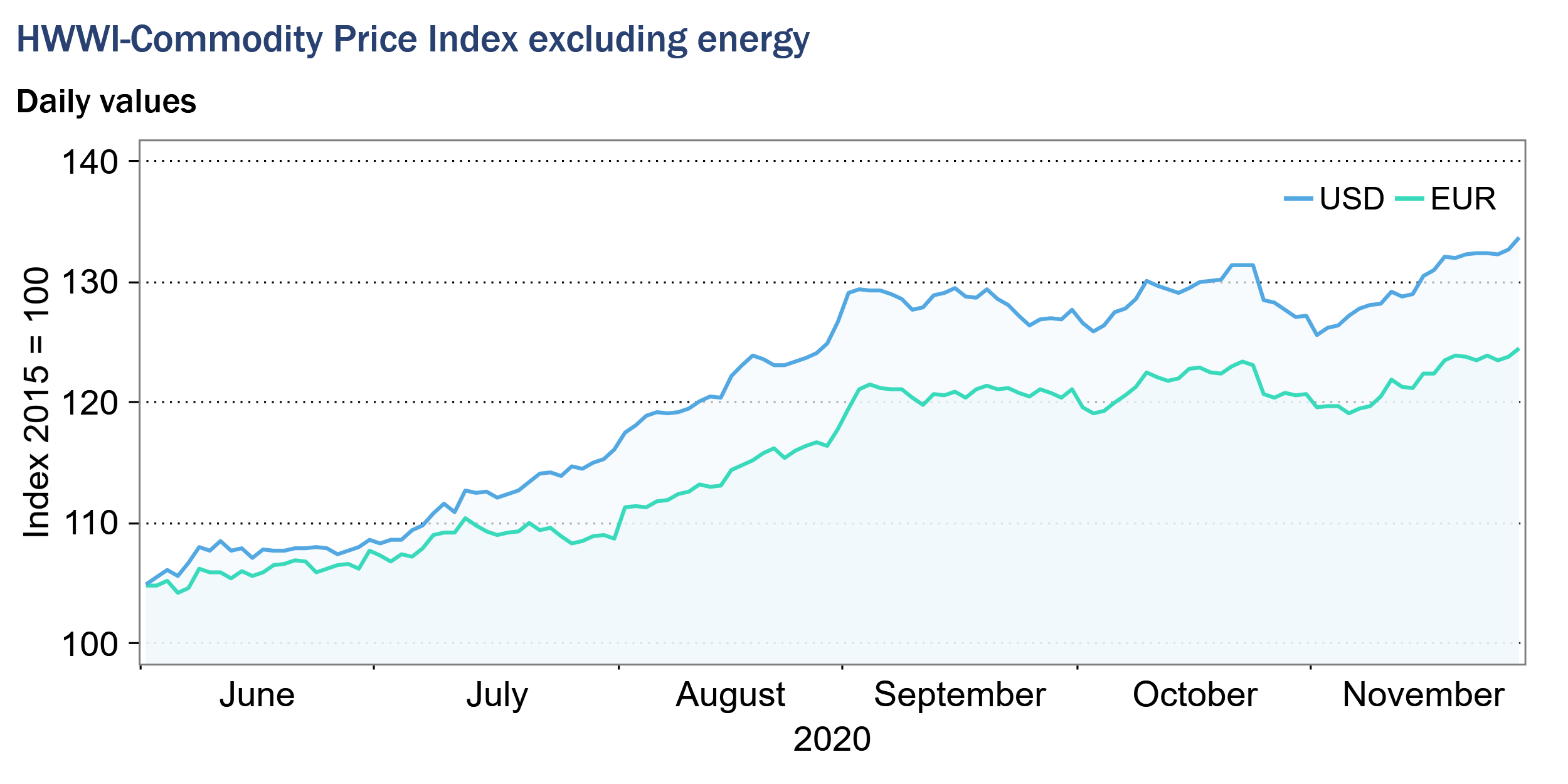 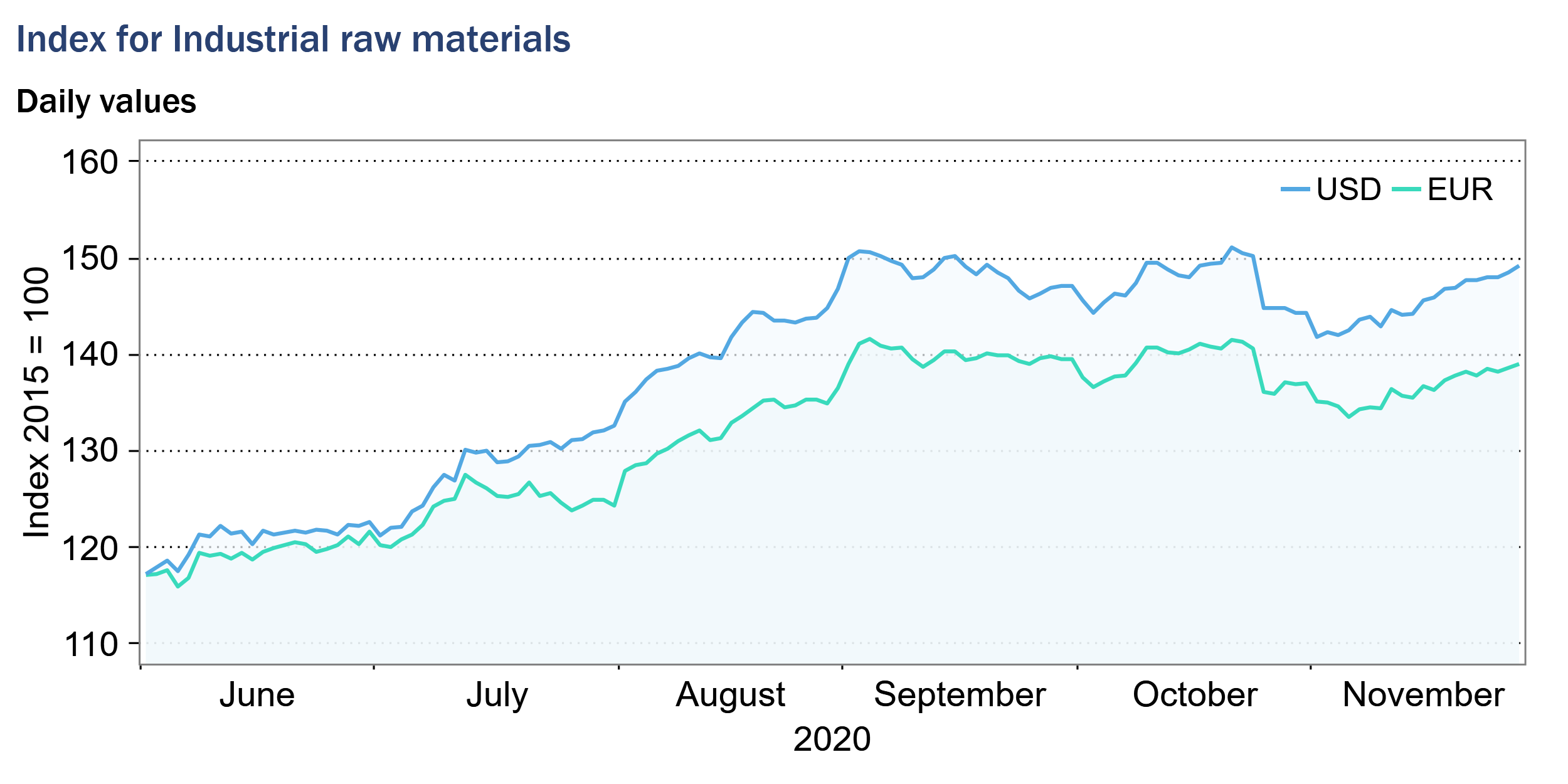 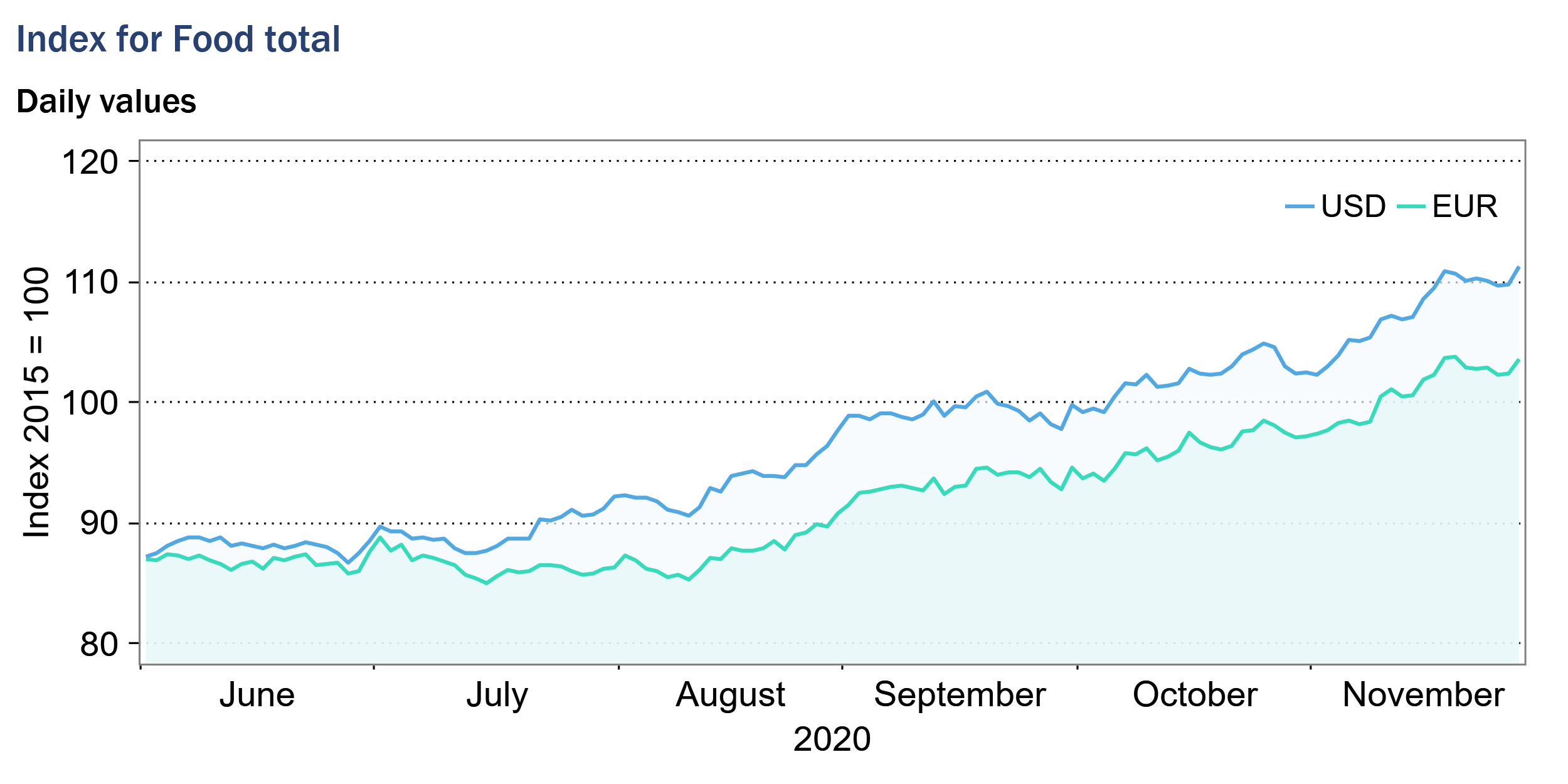 Prices for industrial metals were still supported in November by strong demand from China, the world’s largest metal consumer. While infection numbers continued to rise in the U.S. and Europe, the corona pandemic appears to have already been overcome in China. The ongoing recovery of the Chinese economy drove prices for zinc, lead, aluminium, and copper further upward in November. The price of copper, which is often used as a barometer for the health of the global economy, rose 5.4 % compared to the previous month, reflecting positive expectations on the markets. The average copper price in November was over 20 % higher than in the same month a year earlier. In addition to the positive developments in China, the announcement of the corona vaccine also had a positive effect on the development of prices for industrial metals.

Australian wool prices also continued to recover in November from the huge price declines of recent months. In November, prices increased by 7.9 % compared with the previous month and are still 20 % below the average price in November of last year.
Lumber prices, on the other hand, developed in the opposite direction. After a strong price increase in mid-summer, lumber prices recorded a huge loss in November compared to the previous month. However, the average price for lumber in November remained well above the level of the same month last year.

In November, prices on the markets for food, beverages and luxury food continued to rise. The three sub-indices for grains, luxury foods and for oilseeds and oils rose on average in November compared with the previous month.

On the grain markets, a sharp rise in import demand, particularly from China, was faced with low supply. The drought phase in South America caused by the La Niña weather phenomenon and also dry weather in the harvesting regions of the USA reduced the harvest of corn, soybeans and wheat. Prices for vegetable oils such as soybean oil, coconut oil and palm oil also rose sharply in November compared with the previous month, also due to a poor harvest and tight supplies. In addition to unfavourable weather conditions, the poor harvest can also be explained by the effects of the corona pandemic. For example, fewer oil palms were planted due to labour shortages in producing countries caused by lockdown measures, and fewer fertilizers were used due to supply shortages. In addition, the demand for vegetable oils to produce biofuels is currently increasing worldwide.

After coffee prices fell in October, prices rose on average in November due to supply shortages. Concerns about the ongoing drought in Brazil and also about damage to coffee plantations caused by hurricanes in Central America drove prices up in November. Cocoa and sugar prices also recorded upward movements in November compared with the previous month.

The only exception was the development of the tea price in November. Tea prices decreased on average in November, indicating a decrease in demand. Out-of-home consumption of tea was reduced by contact restrictions to combat the corona pandemic worldwide.